As an avid sports fan and music lover, I often find myself at sporting events and concerts at large stadiums and arenas. As someone currently with no income, I also often find myself in the very top row of those stadiums. Something that I consistently notice is that there are dozens, even hundreds, of empty seats in the lower levels of these stadiums. This imbalance between supply and demand is because the industry is not able to leverage the crowd to effectively price the more premium seats to create an efficient market. The stadium owners, performers, etc. making money off the event lose out because high priced tickets go unpurchased, and the fans that would love the chance to sit closer to the action lose out because the tickets are priced so far outside their price range.

In some instances, the empty seats may not be a direct loss of sales to the venue because they represent a large group purchase or some sort of season ticket model. However, someone is still losing money on the deal (either due to extenuating circumstances preventing them from being there or simple laziness) and leveraging the crowds to create an active market could fix that imbalance. Furthermore, others in the industry like the television channel broadcasting the network, or the organization sponsoring the event like the NBA, have the incentive to project the appearance of a full stadium to stimulate larger audiences in the future. The most egregious example of this that I have seen was at the 2016 Summer Olympics in Brazil. There were events that I attended where most of the best seats were unused- this is bad for the athletes who need encouragement and the International Olympic Committee overall.

I believe that a solution to this problem could be through leveraging the crowd to create an efficient market for seats once the event has begun (i.e. still leveraging third party resellers up until the event begins). 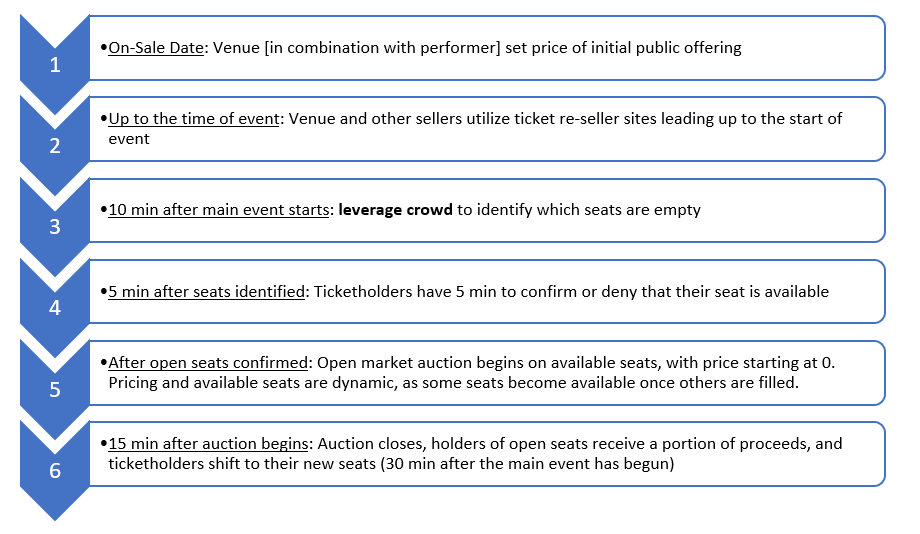 Major reseller players like StubHub, etc. are able to leverage the supply and demand imbalance somewhat leading up to the event, but mostly focus on the need for a middle man between buyers and sellers. After the event has started, the market shuts down and people give up. Additionally, while companies like Ticketmaster claim dynamic pricing schemes, in my experience this has not completely materialized. Hours before the event begins, for an event in low demand prices should plummet, but at least anecdotally I have not seen this to be the case.

The model for capturing this value in the market is similar to how traditional ticket re-sellers capture value, taking a cut of the transaction. Players like StubHub charge both sides of the market, both the buyer and the seller. Theoretically I think that method could work the same here, but testing would be done to determine which side needs more incentive to participate. As an attendee looking at empty seats in the venue, your incentive to report the empty seats is high if there is a chance you can get the seat for only a few incremental dollars.

To address this known problem, software companies are providing value to venues/performers/teams through targeting the initial price offered, but still fail to leverage the crowd to create a truly transparent market. Upon further research (through the DIT Blog submissions even!), there are also companies like Pogoseat that are targeting the “event upgrade” space and aiming to solve the same problem, but also not through leveraging the crowd.

While their goal is the same, the fact that you are not leveraging the crowd to set the optimal market price hinders ultimate participation and adoption. If the venue is still setting the price, then it can be assumed that there are seats that are underutilized. Additionally, if you are not offering the ability to purchase seats to the wider public, only targeting upper decks through localized beacons, then you are limiting your audience.

Practically speaking, I would assume that the variable cost of an additional guest coming in is almost 0. On the flip side, you could increase sales of concessions and merchandise through letting in an additional guest, even if their admission is free. Because of this, I think that leveraging the crowd could be the better way of achieving this end goal.

Homejoy’s Not So Joyous Demise