LEGO Ideas has been by far one of the most visible and comprehensive example of crowdsourcing in the toy industry. Having launched as LEGO Cuusoo, collaboration between LEGO and Cuusoo in 2008, followed by an international launch in 2011, and eventually becoming wholly run by LEGO in 2014, Lego Ideas is a crowdsourcing platform which let LEGO fans aged 13 and up to become a supporter or a creator of a new Lego set. A member of Lego Ideas can discover proposals for new LEGO sets created by other members, give feedback and vote, and share ideas on the discovered LEGO sets with your friends. If a member has an idea for new lego set, he can create a model, take photos, and write convincing project description in the platform. If one carefully follows the Project Guidelines and House Rules designed by LEGO and garner more than 10,000 supports from other members, one’s idea moves to the LEGO review phase where the LEGO Review Board chooses projects that officially become new LEGO sets. The LEGO Review board retains the right to decline any project, regardless of its support. The review sessions are held three times per year including January, May, and September. Projects selected during the LEGO Review go into production and are shipped around the world and released for sale.  As of now, total 12 user generated sets have been approved and sold internationally.

How LEGO incentivize participants and manage its crowdsourcing platform

The LEGO Ideas has designed a very attractive incentive program and a strict regulation to encourage its fans’ participation and to manage the overall proposed ideas. The platform promises to offer both fame and financial gain to an originator of a successfu 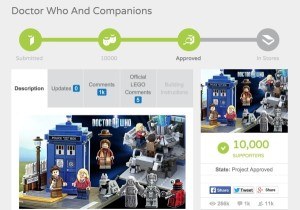 l idea approved by the LEGO Review Board; the originator will receive not only a 1% of the product’s net sales but also opportunities to work with professional LEGO designers, who create the final set based on the originator’s idea, to be featured in set materials, and to be recognized as the product creator. In addition, LEGO Ideas rewards participants other than those whose ideas are selected for the final production with the in-platform points and badges, so called Clutch Power, which show your peers in the platform the level of your contribution.

While the incentive program which offer both offline and online gains to participants ensures that a meaningful number of ideas flow in its production funnel, its strict and straight-forward ground rule regulation play a role as a filter in the funnel. Its age restriction, which requires an user of LEGO ideas to be at least 13 years old, ensures that every member can understand the platform’s ground rule and behave accordingly. Moreover, the LEGO Ideas have tried to minimize conflicts between the platform and its members through various conditions that define the scope of copyrights protected by the platform and of plagiarism. If a conflict among members regarding copyrights or plagiarism occurs, the LEGO Ideas will assign a moderator from its own group so that the issue can be settled in an objective manner.

The LEGO Ideas, as other leading crowdsourcing platforms do in the technology industry, illustrate how a company can create and capture value from a veryl fan base. By designing an attractive incentive program and transparent / objective operation policies, LEGO has turned its platform into its sustainable source of creative ideas. Moreover, because users can vote for his favorite project in the LEGO Ideas, the platform has enabled the company to quickly and conveniently test and understand users’ preference. Such user data lead the firm to reduce new product introduction risk. Lastly, because each Board review’s winners are announced internationally through various media, the LEGO Ideas serve as a good digital marketing platform.

The LEGO Ideas is certainly not free from risk and has some rooms for improvement. For instance, because it is a carefully controlled crowdsourcing platform where a winner is picked by the host, as its user-base continues to expand, it is crucial to improve the system’s transparency and fairness. The fact that the majority of fan projects that reach 10,000 supporters do not get made into LEGO sets (only 16 out of 50 projects that garnered 10,000 supporters were approved to product as LEGO sets) and that LEGO does not give any reasons for the rejections signal a chance that users may start to doubt the system’s integrity. Moreover, because a set released through LEGO Ideas is a long-term process (on average, it takes between a year and a year and a half for the set to become available for purchases), the platform’s effectiveness as a demand test or marketing tool is somewhat limited; the company may need to shorten the lead time considerably.

Despite such risks and shortfalls mentioned above, I think LEGO Ideas is one of the sophisticated and well-balanced crowdsourcing platform. if LEGO Ideas continues to maintain its users’ loyalty, to increase user engagement level, and minimize its churn rate through a series of effective marketing strategies, careful risk management measures, and innovative products, I think LEGO Ideas could be more than it is now.

How the Crowd Saved LEGO

Student comments on Lego Ideas: a leading crowdsourcing platform in the Toy Industry