With more music being created and distributed than ever before, staying “up-to-date” and “exposed” to good music can feel extremely overwhelming. Rather than the best stuff rising to the top, consumers are bombarded by the content that record labels want (and pay for) them to be exposed to. The same songs get played over and over on radio, TV, and on most standard music distribution platform charts. It can be quite exhausting and discouraging for people with more refined tastes that don’t want to spend the time finding good music on their own. As consumption moves to streaming, more and more music companies are working to use data to make this discovery and consumption cycle easier and more enjoyable. Spotify now creates custom playlists weekly for all of its users based on recommendations related to songs the user has streamed in the past.

.
Another service leveraging the data-model to add value in the music ecosystem is blog-aggregator / consumption platform HypeMachine. What is their value proposition? As their website describes: “Every day, thousands of people around the world write about music they love — and it all ends up here.” Essentially, HypeMachine has a network of blogs that it crawls regularly for new content posts, and then creates charts based on the songs that are being written about by the most individual/influential blogs. This sort of metadata matching can be quite difficult, especially if the format for each content post is different. Luckily, the rise of Soundcloud as a hosting platform has unified the format and reduced the matching issue. 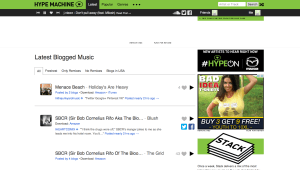 In building its platform, HypeMachine was faced with a two-sided platform problem: it needed to have enough blogs on its “blog reel” to create meaningful charts, then it needs to convince enough users that these charts are a relevant source of quality content. To bake in value to the HypeMachine platform itself, the company includes number of “likes” on hypem.com in addition to the number of times a song is posted about, tweeted about, etc. Let’s not forget, however, about a third but vitally important member of this ecosystem: the artists themselves. When HypeMachine first emerged, the users were the first people to pay attention. With enough users, blogs started seeing meaningful referral traffic, so they started taking notice. Then, once the platform was legitimized by these two players, artists (and management) gave it credence by starting to use the HypeMachine charts as a source of pride and promotion for releases. In addition to aspiring to top the Billboard or iTunes charts, artists now wanted to reach the top of the HypeMachine charts as well.

.
The company captures value in several different ways, but both rely on monetizing a large user base. On its website, the company runs a fair number of advertisements, similarly to many online blogs. The company also has “sponsored tracks” where artists and labels can pay for additional exposure. Additionally, rather than giving away its mobile streaming app for free, HypeMachine chooses to charge $3.99 upfront. Finally, HypeMachine has referral links to iTunes, Amazon, etc. where people can choose to purchase a track they found on HypeMachine, and where the company gets a cut. All of these monetization methods work best when the company has a sticky product with a lot of eyeballs. While the site has struggled in the last several months (likely due to marketing pushes from other streaming platforms), it’s in the top 5,500 sites in the United States and thus generating a fair number of visits, which translates to revenue for the company.

However, they are certainly constrained by their operating model in this regard. Since at its core HypeMachine is a content aggregator, they will have a difficult time monetizing the content itself. This is why they’ve charged for everything but the content … because at the end of the day the artists are choosing to post this (for free) to Soundcloud, and then blogs are reposting this content (for free) on their music blog while they monetize traffic, and finally HypeMachine aggregates that content (for free) and once again monetizes the eyeballs. I suspect challenges for HypeMachine lie ahead as companies with massive user bases get better and better about using the data that they have on customer listening. For example, Spotify refers to itself as a data company just as much as a tech company or a music company … and it is seeking to take personalization and suggested music listening to a completely new level as its data treasure trove grows. After all, the content sweet spot for HypeMachine is content that is free and lingering about the open Internet, remixes and other instances of content production that might not be allowed to be monetized by artists on official platforms. If it were, the official platforms would win the content because they could compensate the artists more for it. A partnership with concert service Songkick signals a possible direction for HypeMachine, where they can effectively convert casual online listeners to active concertgoers for a small fee. After all, in the end the only thing that matters is engagement.

Student comments on HypeMachine: Using Data and Aggregation to Surface The Next #1 Song