Author’s note: I was going to write about how the Patriots have used “technology” such as video cameras and deflated footballs to make them winners, but I figured it was a bit off topic.

MLB Advanced Media, described by Forbes as “the biggest media company you’ve never heard of” is the digital arm of Major League Baseball (“MLB”), one of the four major sports league in the United States.  Baseball is known as a traditionalist sport that has been more immune to technological innovation relative to other sports.  However, despite this conventionalism, in terms of MLB Advanced Media baseball has fully outperformed their peers.  MLB Advanced Media has become a benchmark for professional sports leagues media arms through their innovation streaming technology, BAMTech.

BAMTech was able to master their proof of concept of live streaming sporting events before any other sports league or any other media company.  They accomplished this goal during the strenuous baseball season which consists of long games over the course of more than half the year – this volume was really how BAMTech proved itself as a long-term standard-bearer.  They have consistently streamed games to tens of millions of viewers with no huge glitches or technical errors while offering start-of-the-art advertising technology.  Viewers have provided BAMTech with rave reviews, and the MLB owners were quite happy with their incoming revenue checks the service provided.  MLB Advanced Media only has around 850 employees, but the team has been intensely focused on the viewing experience for baseball fans in order to provide everyone with access to the games they want to see in real-time.  There are no public shareholders to appease (though it doesn’t hurt to have the owners on your side), only the fans.

BAMTech also started streaming games earlier than the other sports leagues, insightfully understanding the value of such a service to MLB.  This foresight was overlooked by other leagues who focused more on TV rights as those were the main cash cows of that time period (and still are, for the most part).  BAMTech understood that future fans would want to be able to see their favorite team from anywhere, even if they weren’t in that particular local market or their team wasn’t playing on national TV.  Their early success led to contracts outside of MLB, which allowed them to test and improve their technology through different platforms including WWE, Fox Sports, and Hulu.

Perhaps the most striking evidence of MLB being a “winner” in the digital space is the fact that Disney paid $1 billion to acquire a 33% stake in BAMTech (they increased this stake in August 2017 by paying an additional $1.58 billion).  Disney will use the technology to launch their proprietary streaming service to compete with Netflix.  Bob Iger emphasized the need to possess the “ability to stream on a scaled basis”.  It’s pretty incredible to think that MLB, which maintained its non-profit status until 2007, was somehow able to develop superior technology to what a large corporation such as Disney was able to develop internally.  I believe this achievement was possible due to their leaner organizational structure and dedicated focus on creating the best streaming technology for their consumers, instead of focusing solely on profitability as if they were a publicly-traded corporation.

It will be interesting to see if Disney can leverage BAMTech to be a winner itself as it repositions itself for a direct-to-consumer push.  The start-up costs for this new venture will be quite large, and Netflix is a formidable competitor with a first-mover advantage.  There has also been speculation that Disney will sign up other media companies (its competitors, more or less) to use the BAMTech technology and generate revenue from there.  It’s a complex and competitive space with no shortage of drama and storylines.  However, I think a lot of these big organizations can learn something from how MLB Advanced Media approached the streaming opportunity and apply it to some of their new technologies. 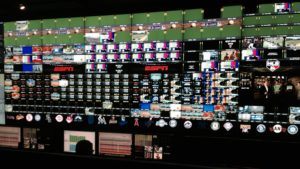 Walmart – Blurring the lines between digital and physical