Yelp is an online platform that connects users with local businesses through a website and app that provides an online directory of businesses and community generated reviews, in addition to a growing number of services for both sides. Founded in 2004, by former PayPal employees Jeremy Stoppelman and Russel Simmons, Yelp has grown to 148M reviews and millions of monthly unique users (29M on mobile app, 64M on mobile web, and 77M on desktop).

Who Are the Sides in Yelp’s Model, and Where is the Value

In the early days, Yelp decided to focus their attention on first attracting the users – specifically a small group of highly engaged great reviewers. They also chose to increase reviewing behavior by “motivating people through praise and attention that their reviews receive from [other users].” Once on the site, users get value through the organization of data, search capabilities, social interaction, direct interaction with the business, and other services which have been added over the years (online ordering, deals, reservation platform). Because of this early focus on developing the user and reviewer side – Yelp has a significant breadth and depth of reviews. This has developed into a competitive advantage, specifically in the US market, as incumbents will have an extremely difficult time matching anywhere near the level of reviews Yelp has generated. While multi-homing cost for users is very low (since it’s free to use most review sites), the value of using Yelp, over a competitor is the richness and number of the reviews on the platform – which helps Yelp to lower some of the incentive to multi-home.

After several years, in 2008 Yelp created business owner accounts where owners could claim their small business pages and begin to enhance their profiles and directly interact and respond to users. Owners are also able to drive traffic to their businesses through paid services Yelp offers such as: targeted advertising and prioritized search results, deals and gift certificates they can offer users, SeatMe – Yelp’s reservation platform, online ordering coordination, among other services. Multi-homing costs for business owners are not terribly high, since it is helpful to have a presence across platforms, but since hours in their days are limited, many need to choose where to focus their energy. Yelp wins out here over other platforms due to the user base and review history Yelp has maintained and grown over the last 14 years.

The other side of Yelp’s platform are independent developers. Yelp has opened their API and even created a program called Fusion to offer more Yelp data to developers hoping to integrate with their apps and websites. This integration helps increase “usefulness” of developers own sites, and drives more traffic to Yelp’s site and businesses. Creating more value for developers, Yelp, Yelp businesses, and indirectly for users who marginally benefit from increased site traffic.

How Does Yelp Make $

Yelp makes money by offering “value added” services to the side of the platform that has the greatest potential to capture value – the business owners. To increase the variety and breadth of businesses on the site, Yelp also provides a free pricing tier. This way, users will be more likely to find what they’re looking for, even if the business decides not to pay for the added upgraded pricing tiers. 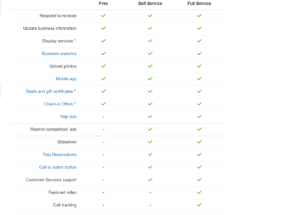 The other sides of the platform – users and developers – are not charged, and access the site and APIs for free as they are creating significant value for the platform through traffic, which helps drive Yelp’s ad revenue, and create more value (which can be monetized) for the businesses.

Looking at the businesses, there are a number of different network effect relationships at play. On the user side, there are some same-side network effects: as users increase, the value of the site increases for each individual users through added reviews and ratings. While these are significant, they are diluted somewhat as not all users are active reviewers, many are “lurkers” who never post any reviews, and thus do not add significantly to the same-side effects. A 2011 Yelp blog post explains that they operate by the 1/9/90 rule “only 1 percent of users will actively create content. Another 9 percent, the editors, will participate by commenting, rating or sharing the content. The other 90 percent watch, look and read without responding.”

Cross-side network effects also play a role as increased users increased the value for the businesses who can advertise, connect, and in the end hopefully convert users to consumers. For the users, the more businesses on the site can increase the “completeness” of the business profiles, allow more variety of options to search among, and more options to choose from for those participating in the added services (online delivery, reservations, deals). Developers too participate in these cross-side effects offering as the more data, reviews, and businesses on the site, the greater the value of the integration within their own app or website; and, in turn, the more developer usage, the more traffic will be driven to the site resulting in more reviews and more traffic for businesses.

Student comments on How Did We Decide Where to Eat before Yelp?