Microsoft is a strong device manufacturer player in the AR/VR market, rising to prominence with the launch of HoloLens in 2016. With HoloLens, Microsoft chose to compete in the mixed reality space, which blends elements from both Augmented Reality and Virtual Reality. More specifically, the headset layers holograms on top of the field of vision[i] creating a seamless integration. 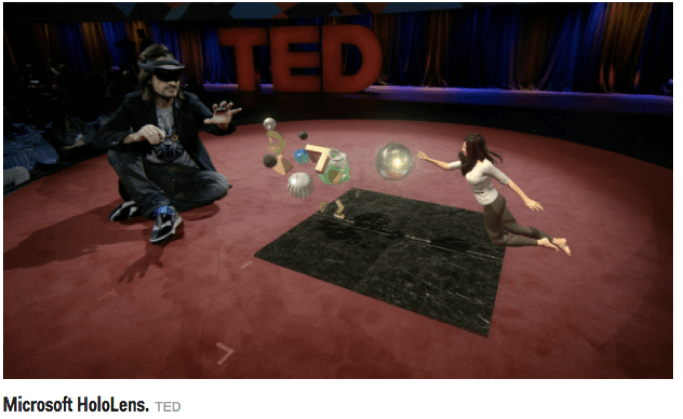 Microsoft had originally designed HoloLens for gaming applications. However, before the product launch, CEO Satya Nadella has pivoted the product for enterprise applications. This proved to be a sound maneuver as the launch of the$3,000 Development Edition attracted significant interest from established organizations including NASA and Volvo. [ii]

Unlike its large competitors like HTC (Vive) and Facebook (Oculus), Microsoft has developed a strong value capture strategy by targeting businesses rather than consumers. This move has enabled the company to aim for a higher price point and create more value for customers. There already are numerous business cases for HoloLens, ranging from enabling people to work together across different time zones to simulating the surface of Mars.[iii]

Another key aspect of the value capture strategy is the use of Windows 10 operating system to run the headset, which creates an ecosystem for the nascent technology. Moreover, as competitors like Intel and Asus are building clones that are running on Windows 10, Microsoft is increasing the reach of its operating system.[iv] If Windows 10 becomes the operating standard for AR/VR hardware, Microsoft will gain a hard-to-beat competitive advantage. Given that margins in software business are significantly higher than hardware, capitalizing on the software development will enable Microsoft to preempt the commoditization threat that other PC companies are facing.

The HoloLens provides a tremendous opportunity for Microsoft to effectively compete with industry giants like Google and Apple, who have a better track record of innovation. A successful strategy on HoloLens can actually turn around the lagging performance of the company.

With HoloLens, Microsoft should further target to build the AR/VR technology ecosystem around its own operating system. In order to build the ecosystem, Microsoft needs to leverage network effects by first attracting developers and consumers to its platform. Making the platform free but exclusive to developers can ensure supply of developer talent and boost the platform’s reach.

Data analytics should be a key pillar for Microsoft’s strategy going forward. A promising area of application that Microsoft could target with HoloLens is data visualization. Replacing Excel charts with interactive 3D colorful visualizations can easily liven up boring business meetings. With HoloLens, the user can literally “dive into” data, see patterns that are not discernible on two-dimensional plots. In fact, 3D/VR plots might become the industry standard in the near future. As datasets are getting more complex, predictive analysis tools are getting more detailed and more intricate too. As a result, it is becoming harder and harder to diagnose these predictive models. A 3D interactive environment, compared to the classical two-dimensional plot, can be an order of magnitude more useful on such issues. These methods would enable Microsoft to build its consumer reach.

Microsoft can also use its recent acquisitions in data analytics to improve the HoloLens ecosystem. One of these companies is Revolution Analytics, which was bought by Microsoft in 2015 for an undisclosed amount[v]. This was a surprising acquisition at the time; Revolution Analytics relies on the open source statistical software R, and Microsoft has a well-known history of averting anything that is open source. R has a very vibrant and dedicated community, who constantly emphasize the importance of visualization[vi]. Microsoft can leverage this community by supporting R package developers who work on 3D/VR visualization. The community in return can increase the consumer reach of HoloLens and become a crowdsourcing platform for developing packages for Microsoft’s clients.

In summary, HoloLens promises tremendous growth opportunities for Microsoft, especially through data analytics and crowdsourcing. If Microsoft successfully capitalizes on software development and becomes the industry standard for AR/VR technology, the company will undoubtedly jump miles ahead of competitors in the current tech race.