Dating/geosocial networking apps have become big business.  15% of Americans use or have used dating apps (as of early 2016) and the trend has caught on across the globe.  Dating services have been popular for decades – before apps became ubiquitous, there were websites (match.com and eHarmony) and before that there were matchmaking services.  Business models have varied greatly in the industry, with some platforms charging a success fee, some charging membership fees, and others simply relying on advertising to turn a profit.  Over time, as apps became more popular, the advertising and freemium models have become the most common monetization methods.

Dating apps face three main issues in attempting to achieve scale that I believe are fairly unique to their subset within platform businesses.

Grindr is a geosocial networking app that was founded in 2009 targeting men who have sex with men (“MSM”).  The company is the market leader in the MSM segment and has become almost synonymous with gay networking apps.  Grindr, which is one of the highest grossing apps ever, achieves approximately 75% of its revenue from their premium version which unlocks various upgraded features for users.  The other 25% of revenue comes from advertisements.

To combat these three critical issues above, Grindr has been successful due to the following features and choices:

Grindr’s success has been undeniable and ultimately led to their acquisition by Beijing Kunlun Tech, a Chinese game developer, for $240m (note: this was a two-part acquisition; the second part of the acquisition valued the company at $400m).  Grindr’s last reported net income figure before the acquisition was $13.7m in 2014.  The company has even forayed into traditional media by launching an online news platform for LGBTQ stories.

See this YouTube clip for a look at the difficulties of gaining scale in this increasingly competitive industry:  https://www.youtube.com/watch?v=0DGl0WCBP3k 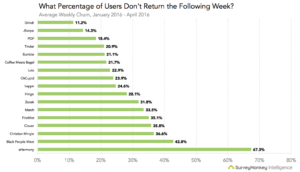 Opendoor – a new platform marketplace for home buying in the US

Netflix: the rise of a new online streaming platform universe

Student comments on Grindr: Unique Positioning in the World of Geosocial Networking