Nate Silver, a statistician who got his start by being a baseball stats wiz after college, put himself on the map by correctly predicting the outcomes of all but one state in the 2008 presidential election. Silver established his blog, FiveThirtyEight, to help quantify the qualitative – although he is best known for his sports and politics predictions, he tracks things as quotidian as usage of “haha” vs “lol” and predicting statistical likelihood of Oscar nominees to win by category. Silver is nothing short of a data junkie, and uses it to power his entire website.

FiveThirtyEight as a business operates similarly to many media enterprises, by offering content to users for free in exchange for advertising revenue. The blog was originally “transitioned” to the New York Times in 2010, and then re-sold to ESPN in 2014. These media properties used their own data to determine how to price and value advertising on FiveThirtyEight – indeed, in 2011 over 20% of the traffic to the NYT website was directly to view FiveThirtyEight.

But the secret sauce of the website is the statistically-based content, coined “data journalism” by ESPN during its acquisition. Silver seemingly gives away his statistical analysis for the low price of ad revenue, capturing less value than it could if it sold its data via a database or an API directly to businesses. He happily walks readers through his statistical thought processes, knowing that most of his readers are unable or unwilling to recreate the analyses themselves. In doing so, he creates a value creation moat around his content because he uses and weighs data in ways most people don’t think to do. As a result, most other journalists are unable to recreate the content on FiveThirtyEight, keeping it competitive as a media platform. 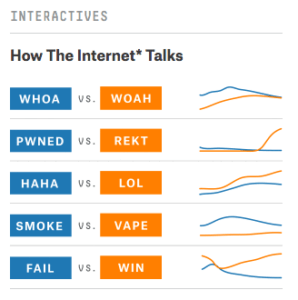 FiveThirtyEight hit its first major data gaff in the 2016 elections, proving that creating statistical models behind closed doors does not necessarily lead to the best outcome. As he had done in the 2008-2014 elections, Silver set out to predict first the outcome 2016 Republican Presidential Primary and then the results of the Presidential race. Unfortunately for Silver, the moat he had created meant that he was subject to only his own inputs, and not necessarily feedback from “the crowd.” Although Silver used a wide range of data: from gallup polls to election day weather forecasts, his data models missed the rise and triumph of Donald Trump.

The team at FiveThirtyEight were flippant about the idea of Trump becoming the nominee – writing articles like the one titled “Why Donald Trump Isn’t a Real Candidate, In One Chart”: “Trump has a better chance of cameoing in another ‘Home Alone’ movie with Macaulay Culkin—or playing in the NBA Finals—than winning the Republican nomination.” Although they gave Trump a bigger chance of winning than almost any other media source (~33%), they still missed the mark on the electoral college. Silver admitted that they missed, but blamed the third-party data sources that they were using to underly their model. Although Silver was able to successfully buck the trends in 2008 and 2012, he succumbed to the same problems as many other pollsters and forecasters in 2016 – he neglected to account for some bias and margin of error in the state-level polls. 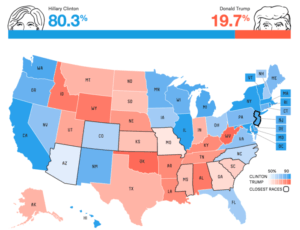 One of the biggest risks of combining a media business model with major statistical analysis as content is that when you are wrong in your data predictions, you are wrong in a very public fashion. Although FiveThirtyEight tried to hedge its position in the days leading up to and the days after the election, by touting that they were much closer than many other media outlets showing 85-99% likelihood for Hillary Clinton, Silver personally received pushback and ridicule for months following the election.

A takeaway for Silver and the FiveThirtyEight team is that centering a business around the results of your data can be risky if you do not allow others to access and use that data for other purposes. Perhaps Silver could have saved-face by selling the raw data directly to businesses, or allowing users to publicly maneuver his statistical analysis to get a better range of results. There is no silver bullet, but the combination of FiveThirtyEight’s value creation and value capture led to a problematic 2016.

The City of Chicago and its Array of Things Project

Student comments on FiveThirtyEight and the Big Data Fail: Election 2016