When I started thinking about what to write for this blog post, it hit me that all the platforms we’ve looked at in class have been digital in nature. This makes sense, given that the class has the word “Digital” in its title… But it got me thinking: Would a non-digital platform follow the same trends and general rules as the digital counterparts we examined in our cases?

So, I decided to pick one example of a non-digital platform, in this case my own beloved Alma Mater Stanford, and see if and how it followed the same patterns as the example platforms we saw in class:

1) Can it truly be considered a platform with a multi sided network and network effects?

Much like the examples we saw in class, Stanford can be expressed (in admittedly simplified terms) as a two sided network of students and professors. As the school gets higher caliber professors, it attracts higher caliber students, and vice versa. And the more high caliber students it attracts, the even more high caliber students it can attract in the future. So, indeed Stanford can be considered a two sided network with strong network effects. (In fact, we actually considered these network effects in a BSSE case examining whether or not HBS was being disrupted. In the case we similarly discussed how strong students go out into the world and create a powerful brand, which enables the school to attract more great students. But it wasn’t until this DigIT class that it clicked that what we were describing was exactly a two sided platform with network effects!)

2) Once the platform has been established, is it hard for new movers to come in?

In class, we saw examples where new entrants had difficulty competing with and displacing incumbents, for instance Fasten’s challenges getting users to consider them as an alternative to giants like Uber and Lyft.

Stanford and the higher education system follow the same principles. It’s very hard for a new university to displace established behemoths. Indeed Times Higher Education found that “Older universities do indeed tend to achieve a higher rank than newer institutions, and there is a weak correlation between the age of universities” though they weren’t generally convinced that age of university was the end-all-be-all of performance and ranking [1]. So I decided to do a little bit more digging in my own metaphorical back yard, the University of California system. I looked up the founding dates of the UC undergraduate institutions and their relative rankings against each other in the US News and World Report listings (see below). I found that there was a .75 correlation between age and ranking! In other words, in the UC system at least, incumbents have a pretty strong advantage against new entrants once the network effects have taken place. 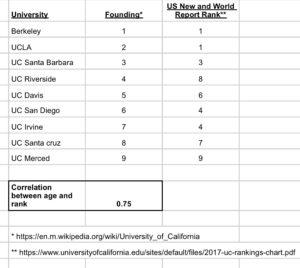 3) Does Stanford have to deal with thorny relationships with collaborators/would-be-competitors?

We saw in class that platforms often need to navigate a treacherous dynamic with collaborators who might turn out to be competitors (e.g. Alipay partnering with foreign financial institutions).

Stanford has a similar collaborator and competitor relationship with Silicon Valley. Many former Stanford students have hit it big in the Valley, like Jerry Yang with Yahoo, Larry Page and Sergey Brin with Google, Reid Hastings with Netflix, Peter Thiel with Paypal, and most recently Evan Spiegel with Snapchat [2]. These success stories build the appeal of Stanford and encourage more students to apply, in hopes of similarly making it big. Indeed Stanford was “the most-selective school in the country” in 2016, certainly in significant part due to this perceived  connection with Silicon Valley [3].

Yet, while Silicon Valley is acting as a collaborator in the sense that it helps attract prospective students, it’s also acting as a competitor by stealing those students away. Peter Thiel, one of the aforementioned Stanford Silicon Valley success stories, actually has a fellowship that pays students NOT to go to school [4]. Similarly, Stanford students are dropping out to pursue their own startups, allured by the siren song of the Valley [5].

4) Do users engage in multi-homing when switching costs are low?

Finally, the last platform rule I’ll seek to claim applies to Stanford is that users (students) engage in multi-homing. Now, this is a stretch, since obviously students aren’t generally constantly switching between universities; that would be highly impractical and expensive. But, students do engage in multi-homing in two ways. One, we apply to multiple schools to increase the odds of getting in. And two, if we pursue future degrees, we often go to different schools for those degrees (myself included).

Overall, Stanford as a non-digital platform may not perfectly follow all the same principles exactly as we saw them in class. But by and large, the same general rules of platforms do seem to apply!

Student comments on Examining Stanford as a platform