Can you think of a market in which Apple and Amazon compete but aren’t the market leaders? There’s actually one industry where that’s the case. It turns out that when it comes to TV streaming platforms, it’s Roku that’s the dominant force.

As consumers have moved away from traditional cable boxes and towards content from digital disruptors like Netflix, distribution channels for content have been changing as well. For many consumers, this means they need a streaming device, such as a Roku, Google’s Chromecast, Amazon’s Fire TV, or Apple TV to access digital content. It’s estimated that a third of U.S. broadband households own a streaming device, with the market for devices and Smart TVs expected to grow significantly[1]. Roku is the market leader, at 37% share, up from 30% last year, while Apple and Google are losing market share to Amazon (the second largest player at 24%).[2] 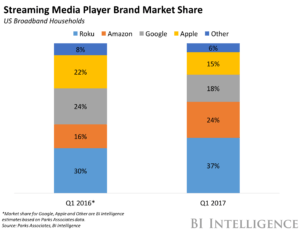 While Roku originated as a hardware product, it has been shifting its product mix over the last few years to become more of a software platform. Roku was the first player to partner with TV manufacturers to provide custom streaming software to integrate into the TV. Now, 13% of all smart TV’s sold in the US are integrated with the Roku platform, up from 8% a year ago[3]. Roku also makes money through advertising and commissions. It sells ads that are displayed on the home screen and screensaver, and takes commissions on any video rentals or subscription sign ups (i.e. Roku will take a cut if a user signs up for Hulu while on the platform). This platform business has been growing rapidly, with revenues up 137% year over year and accounting for nearly half of the company’s total revenue[4].

There are a few interesting factors that explain some of Roku’s success. First, streaming platforms are interesting in that they are a result of users’ desire to multi-home apps, but inability to multi-home devices. Because consumers have so many streaming apps, they need one platform that can bring them all together. Though this is similar to the phone market, it’s a bit unique in that many of the platform players are also app creators. Google, Amazon, and Apple all create both hardware streaming devices and digital content that feeds the devices. This conflict of interest has led to competition playing out on the platforms themselves. For example, Google recently pulled YouTube content from all Amazon devices in retaliation for Amazon not selling Google devices on its website[5]. Given these dynamics, Roku can provide value to consumers as a neutral party that is most likely to offer all apps available, rather than pull any apps for competitive reasons.

Roku was also smart in its partnerships with TV manufacturers. Packaging the streaming platform within the TV creates convenience for customers that makes them more likely to stick with Roku vs. purchasing a different device like Amazon’s. Also, through its partnerships, Roku is able to benefit from the power of large industry players like Samsung. The additional protective benefits of this software platform play are likely one main reason Roku has shifted its revenue mix towards platform and away from hardware. The other benefit of this new mix is that software platform profits allow Roku to keep hardware prices low, thus increasing users and software profits. 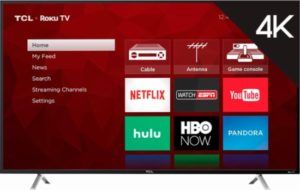 The biggest risk to Roku appears to be Amazon, which is gaining market share and targets a similar customer with its relatively lower cost devices. I believe that Roku has strengthened its position through its partnerships with TV manufacturers and maintaining its position as a neutral player in the industry. Likely, TV manufacturers would want to stay with the neutral player vs. risking a competitive battle like Amazon and Google’s playing out on their platform. However, if Amazon were to start manufacturing TVs with its system built in, it could create a large threat for Roku.

GROW(ing) a platform to improve job placement in Japan (and then the world?)