While it may not be the first company to come to mind, Amnesty International is actually a good fit with VR. Amnesty International launched the #360syria project in 2015 as part of an effort to support fundraising efforts to support human rights in Syria and those victimized by the on-going conflict there. They brought together specially created photography, aural experiences, and 3D generation techniques to create a 360-degree photo based “Fear from the Sky” website,[ii] and a VR experience that was used in on-street fundraising efforts. The efforts won a 2016 “Digital Innovation of the Year” award for charities and gained international recognition.[iii] 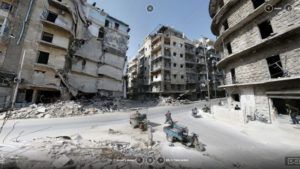 Amnesty International’s aim with this project was to make the experiences of those in war-torn areas of Syria real to people many miles away in safety. Amnesty International hoped that by making these experiences more vivid, they could make the cause much more real and important to people; not only could this drive short-term fundraising efforts, but it might also have positive impacts in the long-run due to engagement and social pressure.[iv] In keeping with the cost-conscious nature of the effort, they leveraged recycled smartphones with VR adapters, and worked closely with partners to supply the technology to bring the experience to life.[v]

One of the commercial promises of VR is to make entertainment much more immersive and vivid than current technology is capable of. Amnesty International is seeking to gain experience leveraging the same promise in the charitable giving space.

Amnesty International’s value capture method here is clear. They are hoping that the device will drive increased charitable giving. Just like a gamer might pay more for a VR gaming experience over a traditional one, Amnesty hopes that givers will give more because they are more deeply affected by an empathetic VR experience than by a more traditional giving campaign.

So far, the campaign seems to have been effective. Amnesty reported that giving rose 16% over the baseline during their use of the VR headsets in on-street giving drives.[vi] This isn’t necessarily causative, but the correlation does how promise. However, there is a caveat that bears mentioning. While the cost of the creation campaign isn’t public, there is the question of whether it is creating more value for donation than was consumed in the media’s creation.[vii] For Amnesty International to be most effective, it needs to get the greatest possible leverage out of its budget. Essentially, is 16% “enough” of a boost to really prove the efficacy of the concept?

Where to go from here?

Amnesty International faces a somewhat different set of questions in how they adapt the use of the technology going forward because they are not a traditional business, they are a charity. One question a business would face would be how much of the value chain do they want to continue to play in. A second would be, given that this application is really analogous to a “product,” do they want to, or even can they, attempt to leverage it into a platform?

For Amnesty International, turning this into a profit generating mechanism would be somewhat distasteful, but the corollary to the above questions would be how effective can they make it, and do they need to own the capabilities internally or should they outsource them? One option for Amnesty International could be to work with technology and charity partners to create a charity VR content platform that can be used to help create more effective charitable giving campaigns. An open platform here that could drive value would be a worthy goal.

Internally, Amnesty International should be considering how they can most effectively leverage the technology going forward. One goal should be to do many tests with different types of media generation and delivery to more effectively boost fundraising with VR experiences. Another priority should be to validate the payoff of such investments, while a last consideration should be which parts of technology, content creation, and campaign coordination they choose to own or partner with.