With constant innovations and digital transformation we haven’t noticed how platforms had surrounded us. In our modern life almost every product is a platform of some kind. Right now we can’t imagine our life without platforms and the trend is that with introduction of Industrial Internet (Internet of Things) everything will become a platform by definition.

The most classical example of platforms is Amazon.com. It was started in 1994 by Jeff Bezos in Seattle, Washington. After leaving the Wall Street firm he decided to focus on E – commerce and sell books over the Internet. So initially Amazon.com was an online bookstore. It had a very unusual business plan, that confused many investors. Bezos was not going to generate any profits for the first 5 years. For that time that was outstanding. During the first years Amazon acquired the necessary expertise in selling books online. It created value by offering bigger variety of titles than any existing bookstore. The largest bookstore could have up to 100,000 items in inventory. Largest mail catalogue could offer up to 200,000 titles. While Amazon.com offered 4–5 times more online. It captured value by charging a modest commission on every book sale and some advertising.
In 1997 Amazon.com went IPO on NASDAQ. Before dot-com bubble burst amazon.com started to scale up its platform to sell not only books, but also music and movies. That helped Amazon.com to pass through dot-com crash and even to become the leading e-commerce platform. In the end of 2001 Amazon.com became profitable making $5 million net income with revenues of $1 billion. After a successful scaling up its platform for sales of music and movies Amazon.com decided to scale up its platform even more to sales of all of the products that can be shipped. It added toys, games, electronics, video games, clothes to its lineup. It also has created an online space, known as Marketplace, where third party companies can sell products to customers (B2C), and to other companies (B2B). Once again, it created value by offering huge number of items online and capture the value by charging commission on sales and offering additional services like advertising, rush delivery and such.
In 2000–2010 Amazon.com platform customer base has grown to 30 million people. It looks like this was not enough for Amazon and it continued to scale up its business into other areas. It launched Amazon Web Services (AWS) – the cloud computing unit, that became a significant part of the company later. Amazon.com also continues to launch additional services, like Prime shipping membership and such. In 2007 it launched Kindle e-Reader and scaled up its platform to selling even hardware and electronic books. It also began selling various goods under private label, including blank DVDs, CDs, peripheral cables and such. In 2010 Amazon launched Amazon Studios scaling up to content production. A year later it introduced Prime Video – streaming service, included into Prime package, and Fire TV with Fire smartphone. The latter was a big failure though. In 2015 Amazon launched Flex delivery service and opened its first brick-and-mortar book store in Seattle.
Throughout its history Amazon has been scaling up its platform to various diverse businesses and earned a credit as the most successful company in diversification. Right now its portfolio includes the following products and services:

Mostly Amazon creates value by offering various goods and services sold by third parties, as well as by Amazon itself. It also creates and sells content. Amazon captures value through multiple channels in various products and services, starting from various subscriptions and fees and ending up with selling its own hardware, content and advertising. Amazon owns the whole value chain and thus is very efficient in capturing value. Its ultimate goal is to become the lowest cost customer centric online marketplace.
In Multi-Homing/Network Effects matrix Amazon occupies the lower right quadrant with low Multi-Homing and high Network Effects. This is “winner takes it all” quadrant with a lot of competition at the beginning. Even after you have won, you have to constantly grow and scale up your business to prevent competitors from upper-right and lower-left quadrants from entering. That’s what we see in case with Amazon – constant diversification and growth.
Another interesting aspect of Amazon growth and development is its cooperation with various merchants. Throughout its history there were a number of partnerships: Toys4US, Borders, Sears, bebe, Mothercare, Marks&Spencer, Lacoste, DC comics and even USPS and AOL. Most of them was beneficial for Amazon because all these companies are complementary to Amazon platform. In this case cooperation is mutually beneficial. 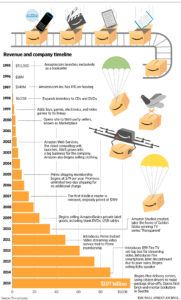