Today, the AR/VR world is fairly niche. While AR/VR technology have been commercialized in a few discrete industries (gaming perhaps being the leader), this tech has yet to become a daily part of most people’s lives. So it is worth asking the question, where’s the company that is going to do for AR/VR what you might say Apple did for the personal computer? How do we take advantage of all this technology has to offer?

There are a lot of companies working on A/R., both big and small. It is tempting to think that lumbering giants like Facebook, Google, and Microsoft won’t be able to innovate quickly enough to take the market. After all, it was a startup–Apple Computer–that popularized the personal computer; not incumbent IBM. Perhaps they will have to rely on acquisitions of companies like Magic Leap to make the magic–pun intended–happen.

On the other hand, disruption theory teaches us that when a product or service has yet to completely meet the needs of customers, an integrated approach to servicing the “job to be done” is appropriate. It is fair to say this is the state of the AR/VR world. It has a lot of potential, but just isn’t quite where it needs to be for daily use. For VR, an integrated approach means controlling aspects of the customer experience: the headset, the software, etc. Putting together all these components will require a complete platform. That is where the big guys have an advantage.

This is all a long way of suggesting, we should all be keeping our eyes on Apple in AR/VR. Apple not only has the resources to make an integrated strategy successful, they have the platform with over 700M currently active iPhone users (1). Others, such as Google, have large platforms too, of course. The critical difference is that Apple has been pursuing an integrated strategy since the 2000s, and have developed a competitive edge where integration is concerned. While there are far more Android users in the world than Apple OS users, Apple OS users are all using phones which meet a fairly narrow band of hardware constraints. They are designed to work in one big eco-system. Google’s eco-system is far more modular. However invested Facebook may be in AR/VR, if they don’t control the hardware experience it will be much more difficult (if not impossible) for them to pursue an integrated strategy. 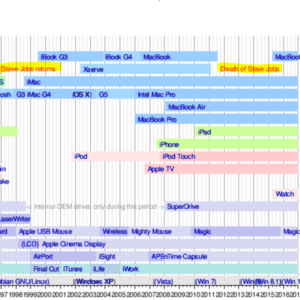 he other reason that we should keep our eyes on Apple is that they are overdue for the next big innovation. Since Steve Jobs’ death Apple’s pace of new product innovation has all but ceased. It is like the company is frozen in time. Each year customers buy they latest version, and accept marginally improved functionality. Few expect Apple to produce the kind of innovation it had under Jobs’ leadership in the 2000s. The Apple Watch, hailed as the next big thing, didn’t make the splash it had intended. Since then Apple has been looking for the next iPhone.

AR presents an opportunity to fulfill that mission. Apple is already the platform on which many of us run our lives. We use our phones for communication, information, to socialize, to play; all jobs that can be enhanced with AR. AR is also achievable for Apple. We have already seen success of apps like Pokemon Go. What if Apple could incorporate AR into its OS? What if Apple could design the hardware that could complete the experience? This is the sort of thing Apple has traditionally done well: successfully incorporating hardware and software in a way that makes our lives easier. In Steve Jobs famously repeated mantra: “It just works. Seamlessly.”(2) (See below)

Whether or not Apple can achieve this goal without Jobs at the helm is unclear. An analysis of patent filings suggests that Apple has been working on AR for the last ten years (3). Last year it was reported that Apple was working on a pair of AR glasses, a trail Google famously failed to blaze (4). According to reporters Apple has assigned the “best of the best” to this initiative. This doesn’t mean we should expect iGlass anytime soon, of course. According to the Financial Times, the iGlass is likely more than a year off (5). Apple has invested extensive time and treasure in projects like these before–like the Apple car–only to pull the plug later. Of course, AR brings them back to their consumer electronics wheelhouse.

Unlike the Apple Car, however, succeeding in AR is probably a strategic necessity for Apple. Today Apple enjoys juicy rents at the top of the smartphone world, but customers aren’t going to accept mediocrity forever. If Apple doesn’t introduce the next-big-thing in the next couple years, someone else will. Falling behind the innovation curve could mean a sudden fall from grace for one of the world’s biggest cash cows. So, given its reasons for taking AR seriously, the firm’s traditional competencies and the resources it can invest in AR, there’s reason to believe that it will be Apple that makes AR a part of our daily lives.

Student comments on After years of stagnant innovation, could AR be Apple’s next big play?