In 2017, less than a decade after its release as open-source software, Bitcoin exploded into mainstream consciousness. Built as a peer-to-peer payment network, the potential for the technology to function as a platform for additional applications was recognized early on by developers and confirmed in academic literature (Narayanan et al., p. 240). However, due to the limits of its native scripting language, Bitcoin is currently only able to support simple functions such as basic prediction markets and property tracking.

With the hopes of extending Bitcoin’s underlying technology for a boundless mission set, the Ethereum network went live in 2015, establishing the first Turing-complete virtual machine built on the blockchain. With this network, a theoretically infinite range of decentralized applications (dApps) could be developed and run through its distributed global computing platform. In the following months and years, thousands of these applications have emerged and become tokenized as ERC20 tokens, a subclass of cryptoassets derived from the Ethereum blockchain.

The proliferation of these tokens precipitated a new dilemma for the emerging ecosystem: how might users better trade and exchange these assets? Relying solely on the Ethereum network to manage transactions would result in blockchain bloat, slow the network, and drive up gas charges (ether) for network use. On the other hand, relying on centralized exchanges such as Mt. Gox, Coinbase, GDAX, and Bitfinex poses high costs to users due to transaction fees, technical failures, counterparty issues and digital theft.

To solve this problem, a small team of engineers designed 0x, an open protocol to support the decentralized peer-to-peer exchange of ERC20 tokens. The 0x network pulls posted orders off of the Ethereum blockchain, executing and clearing trades through its own protocol with the assistance of relayers—independent decentralized exchanges, or DEXs—that broadcast orders and generate pools of liquidity. Transactions are then moved back onto the Ethereum blockchain for settlement. In essence, the architecture of the 0x protocol allows parties to execute and settle token trades in a peer-to-peer fashion, removing counterparty risk while bypassing traditional exchange fees, and without excessively taxing the Ethereum network’s own computing power.

0x functions as an exchange platform as well as an open development platform. As an exchange platform, the protocol supports 0x Portal, a software-based application that allows users to trade ERC20-compatible tokens on a purely peer-to-peer basis. Portal can be accessed over any internet browser and will process any direct trade for free. As such, it is a convenient tool for retail token-holders making one-off exchanges as well as larger investors executing block trades. However, a number of competing projects such as AirSwap, OmiseGO, Bancor, and Kyber Network offer similar tools, and 0x has not expressed interest in attempting to capture value from its own P2P exchange tool.

The primary share of 0x’s potential value stems from its utility as a development platform. As of March 2018, there are already 12 decentralized exchanges and another 18 dApps with exchange functionality that are using the 0x protocol to power their operations. Because the protocol is open source, anyone is free to implement 0x’s standard relayer API, integrate 0x exchange functionality into their own dApps, and interact directly with the 0x protocol and other relayers built on the 0x standard. In other words, if you can write some basic code, the barriers to standing up your own token exchange are effectively nil. 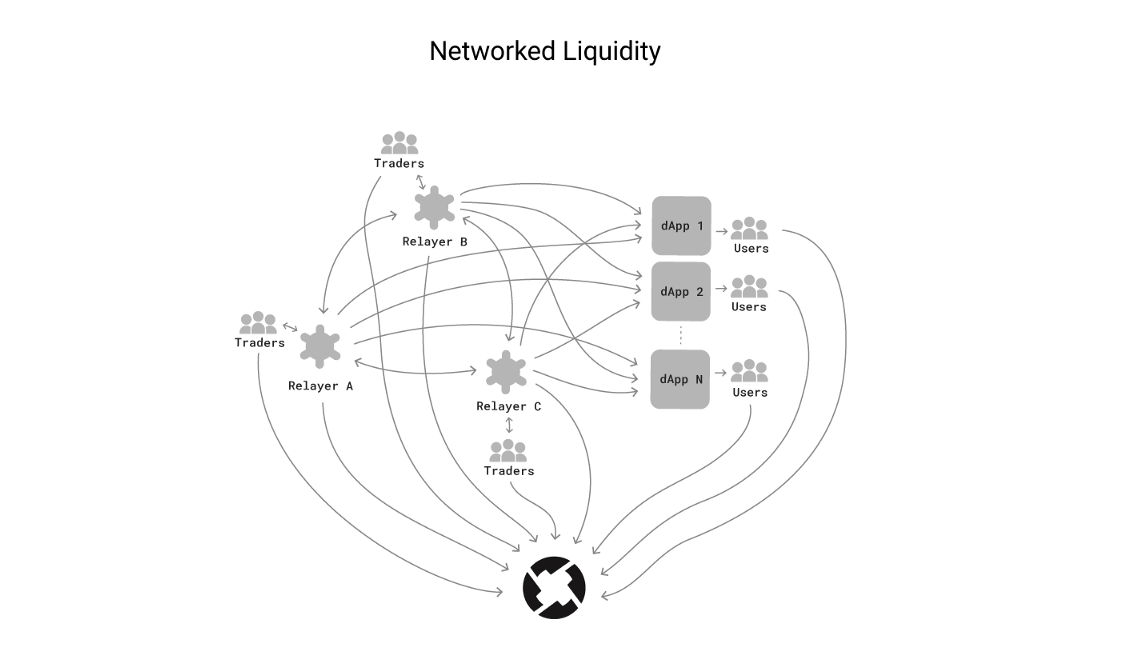 The 0x protocol was built with the specific intention of driving “networked liquidity:” a deep pool of orders flowing frictionlessly across a vast network of decentralized exchanges and dApps. By setting the architecture of the entire exchange ecosystem on the foundations of a shared protocol, 0x aims to aggregate buyers and sellers in a meta-marketplace. The general structure of this network, as envisioned by the 0x founders, is shown in the preceding concept diagram. Exchanges and applications seeking greater liquidity and deeper order books will be able to communicate and share resources in an efficient manner—connecting, merging, and separating easily via a common language and platform.

The deepening liquidity pool borne by the 0x project is driving powerful direct and crossed network effects for the platform, as I’ve attempted to show in the sketch above. Developers of small and emerging exchanges are incented to build on the 0x protocol in order to pool resources and tap into the platform’s greater liquidity pool.  dApp developers can increase the utility of their tokens by integrating 0x protocol functionality. Higher levels of 0x-dApp integration promotes network liquidity, encouraging additional relayer developers to utilize the protocol, which then attracts more dApp developers to add 0x functionality and coordinate for their tokens to be listed on 0x-powered exchanges. In the background, more liquidity and bigger marketplaces draws more traders and capital; more traders and increased market attention for a token helps attract more experimental users and adopters of the token’s associated dApp; and more capital is used to fund the growth of ongoing application development and capitalize new projects.

These are still early days for 0x: the white paper laying out the project’s vision only came out in February 2017, but we are already witnessing heavy development on its platform. The software being developed by 0x and rival ventures has the potential to revolutionize not only the way cryptoassets are exchanged, but the way all securitized assets are traded in the global marketplace. Wall Street’s incumbent middle-men, running businesses on traditional systems for trade execution and custody, may wake to a changed world before much longer.

Student comments on 0x: A Development Platform for Decentralized Exchanges