ZARA operates in the fast-fashion industry which is both one of the industry which contributes the most to climate change – Eco Watch calls it “the 2nd dirtiest industry after Big Oil” [1] – and one of the industry which suffers the most from it. As Greenpeace journalist Shuk-Wah Chung says in her April 2016 online article “Fast fashion is drowning the world”, “Every piece of clothing we buy has had an impact on our planet before we even bring it home“ [2]. Fast fashion is an industry which damages the environment through multiple ways: over-consumption of raw materials –it requires 2,700 liters of water to make just one t-shirt, the amount of water an average person drinks over the course of 900 days! -, high utilization chemicals in the production process, high consumption of oil and gas in the delivery process and immense waste generation because of the nature of the consumption. “Each year 60 billion square meters of textile are left on the cutting room floor. Each year over 80 billion pieces of clothing are produced worldwide, and after its short lifespan, three out of four garments will end up in landfills or be incinerated. Only a quarter will be recycled.” [2] says Shuk-Wah.

The impact of the fast-fashion industry on climate change is all the more an urging issue as it creates a vicious circle by impacting the industry sustainability itself. Indeed, climate change threaten both the raw material availability and the production capabilities of the fast-fashion industry by introducing a high variability in supply and production prices which can hurt the brands’ sustainability in the future.

ZARA started recognizing this issue a decade ago and has since placed CSR at the center of its strategy. Inditex (ZARA’s mother company) 2015 annual report included an Environmental Sustainability Policy document which states ZARA’s objectives: “In the conduct of its business, Inditex integrates sustainable development criteria in all its business areas, ensuring an efficient management of human resources and an appropriate protection of the environment and the eco-systems.” [3] Since 2012, ZARA has committed to reduce its carbon footprint with the following target in mind:

Some iconic consumer-facing initiatives have been taken to address those effects.

The first one, called the “eco-store” aims to redesign ZARA stores in an eco-friendlier way. A flagship of this concept opened in New York in May 2016 (Illustration 1). An eco-store consumes 30% less energy and 50% less water compared to a traditional Zara store and qualifies for an official governmental certification.

The second one is the commitment to use recycled paper for its packaging with the campaign “Boxes with a Past”, currently 55% of online orders’ packaging (Illustration 2). Zara claims that this initiative avoids the felling of some “21.840 trees a year” [4] (Zara’s website).

The third one is the launch of its eco clothing line “Join Life” (Illustration 3) which used eco-friendly raw material and production techniques for women who “are looking for a more sustainable future”.

Finally, following H&M’s path, Zara has launched a recycling program for its customers and even picks up non-utilized clothes at customers’ home directly in Spain. 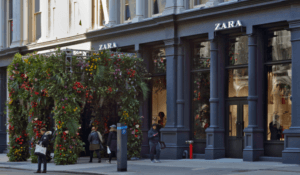 Illustration 2: “Boxes with a past” packaging 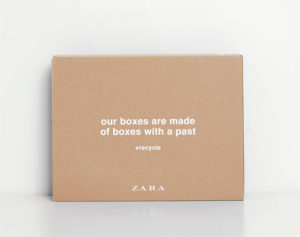 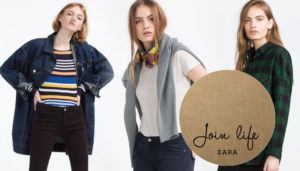 ZARA’s effort to tackle climate change is a great first step and shows its ambition to make a difference in the world. However, there are some additional steps the company could consider taking to achieve its objective of preserving the ecosystem.

First, following H&M’s best practice, ZARA could place sustainability management alongside financial management so that each department feels more empowered to change rather than being frustrated by its impact targets. It would place CSR as a KPI for each of the company’s employee instead of keeping it a separated goal and could reduce the tension in the organization.

Secondly, following Patagonia’s example, ZARA could strengthen its commitment by aiming to register as a B Corporation, the equivalent of a Fair Trade certification to coffee to profit-driven organizations.

Finally, the real question that Zara should raise despite being contrary its value proposition is: should fast fashion encourage customers to keep their clothes longer and buy less? Patagonia has gone that far with its Worn Wear campaign which aims to reduce consumer’s consumption habits by increasing the utility time of its piece of clothing with longer lasting and repairable materials.

[1] EW Contributor, “Fast Fashion Is the Second Dirtiest Industry in the World, Next to Big Oil”, ecowatch.com, August 17, 2015

Barry Callebaut: I’m in love with the cocoa

Student comments on ZARA – How to reduce carbon footprint in fast-fashion, one of the most polluting industry in the world