In October 2017, the International Organisation of Vine and Wine (OIV) announced that global wine production would fall by roughly 3 billion bottles in 2017, a decrease of over 8 percent from 2016 and the lowest level since 1961 [1]. The losses were driven by extreme weather events in Italy, France, and Spain [2]. 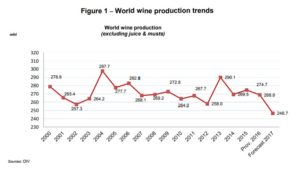 Several reports suggest that rising temperature around the globe could imperil major winemaking regions in the coming decades [2]. A study predicted that by 2050, many regions in Europe, including much of Italy and Southern France, could become unsuitable for wine grapes [2, 4]. The study also suggested that production in California could fall by 70 percent by 2050 [2, 4].

Best known for its signature brand, Kendall-Jackson, Jackson Family Wines is one of the largest family-owned winemakers in the United States. Since the first vintage of Kendall-Jackson in 1982, it has become a premium collection of wineries sourced from vineyards across California, Oregon, Italy, France, Australia, Chile, and South Africa [5].

How Jackson Family Wines is responding to climate change

Some of these initiatives have made Jackson Family Wines better prepared to combat challenges posed by climate change. However, are their effort enough to offset rapid and strong impact of climate change?

To prevent further climate change, it may be more beneficial for Jackson Family Wines to partner with other wineries, other agribusinesses, and government agencies. As climate change not only depends on your action but those of others, it can be even more effective to share knowledge and technology with others to collectively fight climate change.

However, would it be wise to share the company’s knowledge, experience, and expertise with potential competitors? Also, how can a business cooperate and persuade other businesses and government to collectively do what may be the best for everyone in the long run?

[7] Mac Donald, Mitch. Shipping no wine before its time: interview with Kathryn Zepaltas. (2007, May 1) DC Velocity. Retrieved from http://www.dcvelocity.com/articles/20070501thoughtleaders/.

Student comments on Would your favorite wine still be around in 2050?