On October 15th of this year in Kigali, Rwanda, more than 170 countries agreed upon legally-binding terms to reduce global consumption of hydrofluorocarbons (HFCs). Refrigerant HFCs are widely used in air-conditioners and refrigerators but contribute to global warming by trapping heat in the Earth’s atmosphere. Despite not receiving nearly as much media attention as the recent Paris accords, several deal negotiators stated that the Kigali regulations may be even more important than those reached in Paris. The deal could represent a 0.5° Celsius decrease in global warming by 2100. U.S. Secretary of State John Kerry stated “It (the Kigali agreement) is the single most important thing we can do in one giant step.”[1]

Proponents of the agreement were numerous, but one unexpected supporter emerged as well: Chemours, a large manufacturer of a variety of chemical substances.[2] Chemours manufactures under three business units: Titanium Technologies, Chemical Solutions and Fluoroproducts. The last of these units produces chemical refrigerants and represents $2.2 billion in revenue (40% of the company’s total revenue).[3]

Why exactly would Chemours be interested in enacting regulation restricting refrigerants, one of its core product lines? The answer is that Chemours was looking to take advantage of a new sustainable product offering. In August 2015 Chemours commercialized its Opteon brand of refrigerants, the product cools similarly to other refrigerants in Chemours portfolio but does so without damaging the environment. Essentially, Opteon can be used as a greener alternative to HFCs. The Opteon refrigerants qualify as low global warming potential products and meet the new regulations agreed to in Kigali.

Chemours had a lot at stake in Rwanda. If the regulations passed, they were poised to take advantage of the new, stricter guidelines, which most of their competitors wouldn’t be able to do; Chemours and only one other competitor currently hold licenses allowing them to manufacture these green refrigerants.[4]

The Opteon product has so far taken off faster than expected, driven by early adopters in Western Europe and the United States. According to Chemours’ President & CEO, Mark Vergano, “We anticipate Opteon will ultimately replace current refrigerant technology and command a higher-than-average margin profile… Opteon will deliver more than $100 million of incremental EBITDA growth for our business between 2015 and 2017.”[5] See figure 1 for Opteon’s recent and projected financial performance.[3] Recently, Chemours announced that it would invest $230 million to construct a new facility in Corpus Christi, Texas that will triple the capacity of its Opteon product line. 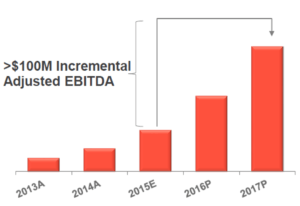 However, it remains to be seen if Chemours’ Opteon line will give the company a sustainable competitive advantage in the long-term. Several critics recently announced that they believe the product is unsafe, something that has been refuted by the company and regulators. In addition, the new refrigerant is 10 times as expensive as HFCs previously used.[6] Chemours faces a near-term uphill battle to convince its opponents that Opteon is safe and effective for the high price. It will need to take advantage of its head start and do this quickly before competitors emerge offering a cheaper alternative.

In addition, Chemours will need to constantly monitor its entire product line in the face of dramatically changing regulations. The reality is that before HFCs were widely used for refrigeration purposes, chlorofluorocarbons (CFCs) were the standard. Regulation in the late 1980s led to a change from CFCs to HFCs, which at the time were thought to be better for the environment. Perhaps there will come a time when regulations change in favor of non-Opteon-like products. Given that Chemours is a broad chemical manufacturer, the company should also consider which of its other product lines could be subject to regulatory environment changes in the near future.

Chemours and the new Kigali regulations provide an example of how a company can successfully adapt to anticipated regulatory changes, resulting in a competitive advantage. The broader implications of Chemours’ lobbying of regulators raises several interesting questions for managers. How far ahead should companies forecast regulatory changes in order to preempt necessary product line adjustments? How much should corporations be willing to invest in research and development on products that may never benefit from regulatory tailwinds?

[2] Tabuchi, Hiroko and Hakim, Danny. “How the Chemical Industry Joined the Fight Against Climate Change.” October 16, 2016, accessed at http://www.nytimes.com/2016/10/17/business/how-the-chemical-industry-joined-the-fight-against-climate-change.html?emc=eta1

Drink Up! That wine ain’t cheap…and it ain’t getting cheaper.