Since the late 80s, art museum personnel have wondered how best to use the internet to complement their institutions’ mission to conserve, proliferate and interpret works of culture. In 2010, a small group of art-enthusiasts at a tech giant called Google got together as part of a 20% project to aggregate art from global museums onto one digital platform. This ‘hobby’ project was eventually launched in 2011 as The Google Art Project, a non-profit initiative that collaborated with 17 international partners including the Tate Gallery, the Metropolitan Museum of Art, and the Uffizi Gallery (1) to reproduce and host one one-gigapixel artwork from each museum, including landmark pieces such as The Starry Night by Vincent Van Gogh.

The Art Project has accomplished a synergy between art and engineering with its unparalleled use of the internet and digitisation to enable a seamless transition from gallery to computer screen. It is now available in 18 languages, and features collections outside of fine arts, including the Yad Vashem (2), and architectural sights like the Sydney Opera House. The platform’s capabilities have expanded- allowing users to virtually tour entire galleries, and a microscope view that allows a user to zoom in to images for greater detail than is visible to the naked eye. (3) 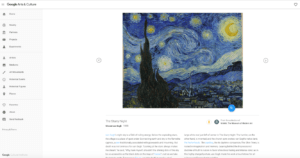 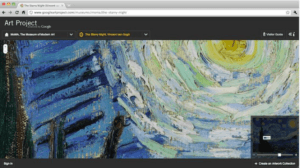 This has been accomplished with the use of technologies like Google Maps and Street View and tools built specifically for the Project. Once the ultra-high resolution images of artworks or spaces are captured, software and GPS is used to stitch these images with museum floor plans- enabling users to switch from Google Maps, into Google Street View and look inside the Partner’s gallery. (4) The platform also incorporates into its exhibits partner institution-provided and/or Google-provided resources—which include Google Scholar and YouTube- that allow users access to additional educational content about that particular work. Recent iterations have enhanced search capabilities and features that allow users to use their Google accounts to build their own virtual private collection. (5) 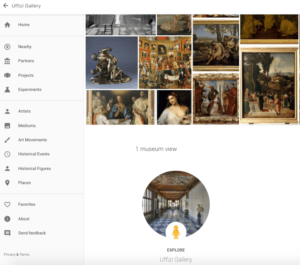 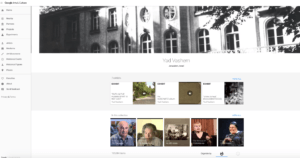 The Art Project has been praised for its role in democratisation of knowledge (6) by enabling audiences and scholars who would otherwise be unable to visit these museums due to barriers of cost or location to tour some of the greatest cultural exhibits in the world. The Project also now allows users contribute their own content, adding their insight to the public collection of knowledge. Initially, museum administrations had concerns that opening up collections to digital availability would hurt museum attendance and create copyright and commercialisation issues- that Google would try to monetise and profit from these exhibits. These were eventually put to rest by two factors- firstly, Google signs contracts with museums that pledge not use the content for commercial gain. Additionally, research has shown that digital transformation of art has in fact increased museum traffic. (7) For example, within two weeks of the Art Project launch, MoMA reported a 7% increase in its website traffic and increases in ticketing . This is because nothing actually beats a first person experience- and what the Project tries to do at its very core, is complement real-time visits and convince viewers to experience this first hand. (8) On the whole, the Project has proved to be a reassuring lesson on the benefits of digitisation for its institutional partners.(9)

Van Gogh made three separate paintings of his bedroom in Arles which reside at three locations. The Project allows visitors to create and share a gallery where these paintings can be viewed side by side; and includes links to their respective museum collections. Imagine the academic impact  of online galleries that have commentary from curators at multiple institutions. Users can add personal inputs as well. (Credit: Google Art Project)

Critics have argued that the Project provides a largely Western-biased representation of art. Google and their institutional partners decide on what they will make available, and the onus falls to them to be as representative as possible. While it has remedied this issue to a certain extent recently, the Project must continue to use its advantage of immense dissemination potential to bring indigenous and traditional art works to the fore. In addition, works at the moment are all iconic- but as an archival tool, it would be of greater value for the Project to digitise temporary exhibitions to maintain a permanent record of works that were borrowed and assembled from various collections for a particular academic purpose. Google should also work towards expanding to a seamless in-museum experience with its institutional partners to eliminate the need for printed collateral and improve sustainability- imagine a system where you point your phone at an art work and get information in the form of an overlay! Moreover, to further the future of online collections Google needs to invest in creating connections between materials held by different institutions and integrate social-networking technologies that replace the “empty room” feel of the current system with interaction between other virtual museum-goers. (10) 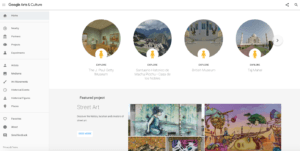 Either way, the Art Project has shown us the magic that happens when the internet and cultural institutions work together. The only question that exists now is that will museums cross that barrier and begin thinking more disruptively about sharing more of their resources with such platforms?