PepsiCo’s supply chain is heavily reliant on commodities such as “sugar cane, corn, wheat, rice, oats, potatoes, and various fruits.” [1] Maintaining a cost-efficient supply chain of these key commodities will be a critical success factor for PepsiCo. PepsiCo recognizes that climate change poses a serious risk to this supply chain as detailed below.

PepsiCo’s 2015 annual report details the risks that the company needs to address. As a result of climate change, “we may be subject to decreased availability or less favorable pricing for certain commodities that are necessary for our products.” [2] Impacts on the supply of water driven by climate change is also a major concern for PepsiCo as water is heavily involved in irrigation of crops used to supply PepsiCo products. As quoted in the 2015 annual report, “deteriorated quality of water or less favorable pricing for water…could adversely impact our manufacturing and distribution operations.” [3] Climate change’s impact on extreme weather conditions is also a source of concern for PepsiCo. According to the report, “extreme weather conditions may disrupt the productivity of our facilities or the operation of our supply chain.” [4]

While PepsiCo faces many risks due to climate change’s impact on crops, water availability, and extreme weather conditions, there are also opportunities. One area of opportunity is reducing the GHG emissions that result from business operations to reduce PepsiCo’s impact on the planet and improve bottom-line profitability by becoming more energy efficient. From PepsiCo’s 2015 GRI (“Global Reporting Initiative”) report, PepsiCo is committed to reducing its contribution to future GHG emissions which would decrease the likelihood that the risks mentioned above are realized. [5] PepsiCo reduced GHG emissions by nearly 18% from 2006 to 2015 which resulted in energy cost savings of more than $96 million. [6]

Another opportunity to mitigate the impact of climate change on PepsiCo’s business operations is improving water sustainability and water usage practices. Water is essential to PepsiCo’s core business as it’s a required input of the production process for many of the commodities used in PepsiCo products. PepsiCo’s efforts in improving water sustainability extend to both its owned operations (plants) and supply chain partners (agriculture). Within owned operations, PepsiCo reduced water use per unit of production by 25.8% resulting in an estimated cost savings of $19 million. [7] PepsiCo also reduced absolute water usage by 3.2 billion liters in 2015 versus 2014 usage. [8] Reducing water usage, as with reducing GHG emissions, has two key benefits. One, it improves the bottom-line profitability of the business since the reductions are productivity driven and not growth sacrifices. And two, it reduces long-term exposure to climate change risks that could impact the availability of quality water due to drought or other extreme weather conditions.

Moving forward, I’d recommend that PepsiCo seek opportunities to bring consumers into the sustainability discussion and catalyze support for a “race to the top.” According to a Nielsen study, the number of total consumers and Millennials who are willing to pay more for brands that value sustainability has increased from 2014 to 2015. [9] 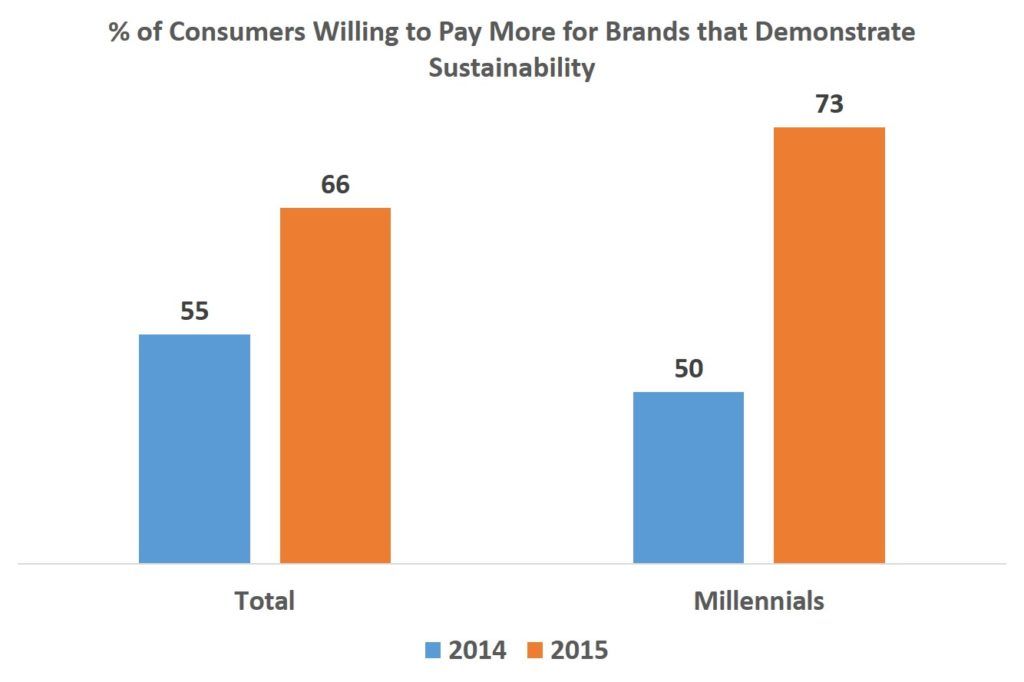 Current initiatives noted above have been public but largely investor-facing. Consumers hold power to vote with their wallets and PepsiCo, as one of the largest food and beverage companies in the world, is uniquely positioned to use the strength of its marketing capability and existing brands to encourage consumers to buy products which are produced by companies which value sustainability. Since PepsiCo is already committed to improving its own sustainability, it has a competitive advantage in this space and could accelerate its efforts by increasing the value consumers place on businesses considering sustainability in their operating processes. If done right, this could be a win-win. PepsiCo could help create a “race to the top” by starting a consumer conversation where it’s positioned well to be competitive and would continue to reap the bottom-line benefits as described in the previous section.

Climate change requires corporations, governments, and individuals to work together to reduce the “free rider” problem which makes it difficult to coordinate efforts that reduce climate change. The risks PepsiCo faces are real as climate change poses a significant disruptive threat to water availability and crop productivity which are essential to business operations. While PepsiCo has taken important first steps, the need to now catalyze consumer support to preference products purchased from companies with sustainability goals, and leverage a “race to the top” to overcome the “free rider” problem is the next important step. Consumers are increasingly voting with their wallets. PepsiCo should accelerate its efforts to increase sustainability as a choice factor for consumers when deciding what to buy.