Climate Change is closing in on all sides of this giant. Can the railroad industry and Union Pacific respond to the challenges and continue to be the economic driver of the 21st century?

Union Pacific has been in operation since 1862, with the passage of the Pacific Railway Act. Since inception, they have undergone many changes, one of the most significant was the transfer of passenger service to Amtrak with the passage of the National Railroad Passenger Service Act in May of 1971.[2]  From this point forward, Union Pacific has exclusively transported freight. Today their extensive network of over 30,000 miles of track covers most of the western United States as seen in figure 1. 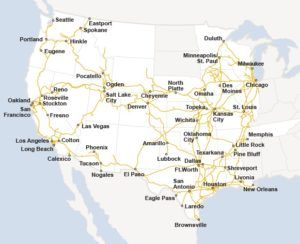 Over this extensive network, Union Pacific carries six categories of freight: agricultural products, automotive, chemicals, industrial products, coal, and intermodal. In 2015, the percentage breakdown of these categories can be seen in Figure 2 below. 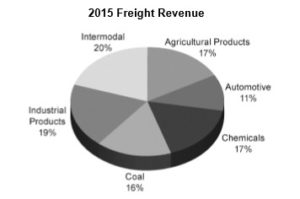 As climate change continues to have large scale effects on the planet, it is effecting government regulations, weather patterns, and the economy. Union Pacific is one of the companies that sits at the convergence of all these.

First, by itself Union Pacific is a large contributor to greenhouse gas emissions producing 11,683,549 metric tons in 2015 alone. While rail is one of the most fuel-efficient ways to move freight, moving one ton 456 miles on one gallon of diesel fuel, the volume of freight being moved leads to large levels of fuel consumption.[5]  Because of its extensive reliance on diesel driven locomotives to haul freight, Union Pacific is at considerable risk for future increase government regulations, emissions caps, or taxes associated with greenhouse gas emissions.

Secondly, when we look at the breakdown of freight in figure 2, every one of the categories stands to be substantially impacted by climate change. As UP stated in its 2016 10-K report: “Restrictions on emissions could also affect our customers that (a) use commodities that we carry to produce energy, (b) use significant amounts of energy in producing or delivering the commodities we carry, or (c) manufacture or produce goods that consume significant amounts of energy or burn fossil fuels, including chemical producers, farmers and food producers, and automakers and other manufacturers.” Basically, every company that Union Pacific interacts with faces risks around climate change and these risks are very hard for Union Pacific to predict or quantify.[4]  Already in 2016 Union Pacific has seen a 24% decrease in percentage of Coal revenues that is coupled with a 31% decrease from 2014 to 2015. This substantial decrease in one of their main freight categories underlines part of the risk faced by Union Pacific from changes to other industries. [6][7]

What Have they done?

In recent years, Union Pacific has continually tried to improve its operating efficiency and reduce its greenhouse gas emissions through improving fuel efficiency. Since 2012, they have instituted several programs including Locomotive Engineer Assist/Display and Event Recorder and trip optimizer. These programs work to automate the engine controls to optimize fuel consumption. In addition to these programs, they are exploring the use of alternative fuels such as liquid Natural Gas that would have lower emissions. However, there are no reported locomotives using this fuel as of 2016. The last program that Union Pacific has instituted is their carbon calculator that assists companies in analyzing the environmental implications of shipping with rail versus shipping through trucking.[5]  Union Pacific is trying to drive volume, which increase fuel efficiency, through appealing to it’s customers to use rail over traditional trucking methods for long range transport.

While Union Pacific has taken several steps to reduce their own effect on climate change through the reduction of greenhouse gases, have they done enough and what is the cost to do more? Have they capitalized on opportunities and reduced risk?

Almost all of Union Pacific’s emissions come from operating locomotives, a requirement at the core of its business. Unless they can develop a completely new technology, how much further can they reduce their dependence on a fossil fuel. Moreover, in 2015 they operated over 8,000 locomotives with an average age of almost 20 years.[4]  To replace this fleet would require significant capital investments over an extended time horizon. This is certainly an additional risk that they have not sufficiently addressed.

They also need to be prepared to address the concern of changing freight mixtures and the impact that has on their rail network. This may mean exploring more efficiently network layouts with significant infrastructure investment, connection to more cities and logistics hubs, or something else entirely.

Something Fishy is Going On