In recent months, Twitter has gone through hard times as the company falls behind its user growth targets and witnessed its stock (NYSE: TWTR) drop below its IPO price of $26 in 2013. Until the company increases its effectiveness in driving alignment between its operating and business models, it is doubtful that Twitter will be able to meet market expectations in terms of user growth, user engagement, and monetization.

What’s in a tweet? Twitter’s business model and operating model

Twitter is an online social networking service that enables users to send and read short 140-character messages called “tweets” via mobile, online, or SMS. The platform generates value for its core users as follows:

By Q3 2015, Twitter was serving 320 million active monthly users.  Similar to any social networking site, Twitter’s user base and the engagement of those users is the lifeblood of the company, as the users generate most of the content on the platform.

For advertising, Twitter creates value by enabling them to purchase “Promoted Products”—mostly on a pay-for-performance basis—that are integrated into the platform as native advertising and are designed to be compelling and useful to users as organic content. Promoted Products consists of:

According to Twitter’s 2014 annual report, their technology platform and information database enables them “to provide targeting capabilities based on audient attributes like geography, interests, keyword, television conversation and devices that make it possible for advertisers to promote their brand, products and services, amplify their visibility and reach, and complement and extend the conversation around their advertising campaigns.”  The platform also allows for advertising across the mobile ecosystem throughout the user lifecycle, “from acquiring new users through app installs, to engaging existing users who already have the advertisers’ apps on their device.” Twitter’s 2013 acquisition of MoPub, a mobile-focused advertising exchange, enabled the company to offer one comprehensive monetization platform that combines ad serving, ad network mediation and a real-time bidding exchange.

#Fail – Where did things go wrong?

Even though Q3 2015 financials were on target, the company lowered revenue projections for Q4 due to major issues with user growth: Twitter’s 320 million monthly active users represents only a four million increase over the last quarter, compared to the 49 million new monthly users added by Facebook. Industry observers attributed this user growth slowdown to product stagnation.  This is particularly worrying as declining user engagement could translate into user defections to competing platforms, and advertisers are likely to follow suit.

There are two major challenges with the operating model which undermined Twitter’s ability to deliver on its business model: 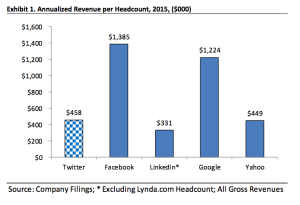 Under new CEO Jack Dorsey, Twitter has made substantial progress in advancing the product, releasing several new innovations such as Moments, NBA Live timeline, interactive ads and click-driven pre-populated tweets. Acquisitions like Vine and Periscope offer opportunities to further expand the platform’s features and attract a broader base of users.  In addition, the company has expressed an interest in diversify beyond its core “Twitter product,” and explore opportunities such as monetizing non-users through re-targeting of advertisements (sending advertisement to potential users who have visited the Twitter platform but have not yet made an active profile) and hosting commercial e-storefronts à la Amazon or eBay.

The big question remains, however, as to whether or not Twitter can strengthen its operating model to effectively execute on its many ambitions, and do it quickly before it loses further ground in the competition for digital ad dollars. Given its track record over the last two years, Dorsey might need to narrow the company’s focus in the next 12 months to prove out its business model before expanding in too many directions.

TESSEI: The 7 minute miracle of the bullet train cleaning crew

The Business of Blowouts: Operational Efficiencies at DryBar