Intersection, backed by the Alphabet company Sidewalk Labs, is a technology company that redefines the urban experience. The company’s most high-profile project has been LinkNYC, free gigabit speed WiFi kiosks that it has begun installing throughout New York City and just announced would be expanding to London and other cities soon.[1]

Deploying complex technology in public spaces can be challenging, though. As it develops and tests new products, Intersection is demonstrating some core lessons about the digital transformation of cities.

1. Human interactions matter
Technology in urban spaces can change how we interact. In creating an immersive experience for the new Edward M. Kennedy Institute for the Senate, Scott Anderson of Intersection wrote that “Despite more than 50 custom applications developed for the experience, we wanted the technology to facilitate inter-personal conversation and collaboration. The main attraction is the people, not the technology.”[2] 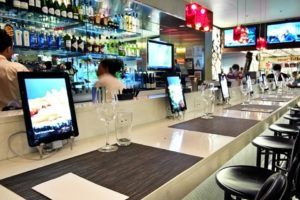 Similarly, interaction was a key concern when OTG Management hired Intersection to change the customer experience in airports such as Delta’s terminal in La Guardia. The iPad app Intersection developed to automate the restaurant ordering process increased sales by 15-20% per customer while also speeding up service and turning tables faster. Apparently, not having to flag down a waiter is a very profitable operating change. But other interactions are important to the vibe of a restaurant space. OTG Management CEO Rick Blatstein was pleased to find that rather than isolating customers, iPads “add electricity to a room. What you see are a lot of people talking to each other. They do ‘the lean’ over to another customer to talk about something they read on an iPad, and that causes more social interaction than we had before.”[3] 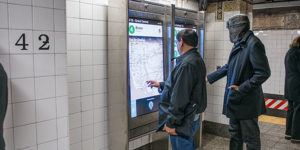 Getting around the NYC subway system is notoriously difficult, and in 2013 the system was long overdue for a digital navigation system. Setting up a public system, though, is not as easy as putting an iPad on a wall. Working with the MTA, Intersection developed a concept for a touchscreen navigation system to be mounted in some of the city’s busiest stations, but the initial rollout was far from easy. When Intersection installed a test kiosk, they found that the touch sensor technology on the large screen, which relied on microphones, did not perform as well in the loud and rumbling subway station as it had in a glass-enclosed Manhattan office building. After six months of redesigns and bureaucratic wrangling with the MTA, Intersection launched a more durable version with new touch sensor technology and an improved interface.[4] 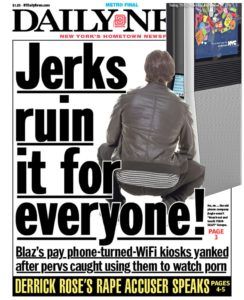 In addition to the design and human interface challenges on the operational side that Intersection faces, it also faces business model challenges. With city budgets often tight and governments unwilling to make risky bets on new technology, Intersection must in many cases self-fund its projects with ad revenue. In a place like the streets and subways of New York City where density and ad rates are high, that is possible. As the company seek to work in other regions, however, they will need to find different models, from data capturing and analysis to subscriptions to government subsidy.

Can Cellphones be the New Bank for the Unbanked?

Student comments on Three lessons from building the digital city