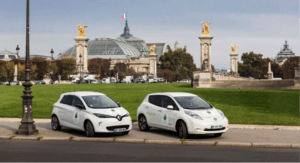 Environmental regulations and standards on the auto industry range from areas such as CO2 and exhaust emissions to fuel efficiency and water usage. Because these regulations are becoming stricter every year and consumer demand for more environmentally friendly vehicles is rising, the Renault-Nissan Alliance continues to innovate to mitigate climate change.

What is the Renault-Nissan Alliance?

Formed in 1999, the Renault-Nissan Alliance is a uniquely structured partnership between two of the world’s major carmakers based on cross-shareholding. Renault holds a 43.4% stake in Nissan and Nissan holds a 15% stake in Renault. The France-based Renault and the Japan-based Nissan sell cars worldwide through eight brands – Renault, Nissan, Renault Samsung, Infiniti, Venucia, Dacia, Datsun and Lada. Stewarded by Chairman and CEO Carlos Ghosn, the two have combined revenues of €129 billion, around 10% of the global market for auto sales [1].

With about 95% of automotive transport relying on petroleum-based fuels and the sector contributing to 17% of CO2 emissions [2], Renault and Nissan have focused on reducing emissions. Keeping the United Nations Framework Convention on Climate Change’s commitment to preventing global average temperatures from rising more than two degrees Celsius in mind, Nissan established its vision for reducing well-to-wheel CO2 emissions from new vehicles (i.e. over the full life cycle of a vehicle) by 90% by 2050 [3]. Renault was also the first carmaker to make a public environmental commitment to shrink its global carbon footprint [4].

In their October report, CDP, a non-profit organization representing over 800 institutional investors with $100 trillion of assets, listed Renault and Nissan on their 2016 Climate A List, a group of companies identified as A-grade for their actions to mitigate climate change [5]. Nissan was recognized for its two-part vision to reduce emissions: (1) short term technological improvements that make its internal combustion engines more efficient; and (2) its long term focus on increasing the adoption of zero-emission electric vehicles (EVs) [6].

Renault was not only awarded for its success in reducing emissions by over 17% in the last six years, but also for the inclusion of a carbon footprint decrease in the company’s strategic and operating plan [7]. Renault is also committed to the idea of supporting the circular economy of EVs; for example, by leasing the batteries, it is easier for the company to find ways to reuse them after their efficacy in cars decreases [8].

The Alliance has been focused on the future of EVs since the introduction of its best-selling Nissan Leaf in 2010. With over 350,000 sold, all of the Alliance’s EVs account for about half of EVs on the road today [9]. In December 2015 the Alliance partnered with the 21st United Nations Climate Change Conference (COP21) and provided 200 EVs for the delegates. The Alliance will do the same for COP22 in Morocco, which starts next week [10]. In addition to this partnership, the Alliance was one of thirteen auto companies to publicly pledge to de-carbonize auto transport during COP21 [11].

Time to turn over a new Leaf?

Government incentives and access to EV charging infrastructure are two of the main drivers of EV adoption. Alliance Chairman and CEO Carlos Ghosn has been vocal about both of these issues. In the October 2016 Harvard Business Review, he said that he believes recharging infrastructure is developing slowly, hurting consumer adoption of EVs, and that public-private partnerships are necessary for development [12]. Progress has been made as recently as this week with the White House announcing actions to accelerate EV adoption and charging infrastructure through the designation of forty-eight EV charging highway corridors in partnership with vehicle manufacturers, including Nissan [13]. However, swift progress needs to be made globally in order to increase the proliferation of EVs.

In order to bridge the current gap between demand for gasoline-powered cars and EVs, the Alliance will sell hybrid electric cars powered by small gasoline generators to alleviate consumer concerns around the lack of charging stations. At the moment, this will only be in Japan, but Ghosn said that this could be feasible in Europe as well [14]. In addition, Nissan recently completed its purchase of a $2 billion controlling stake in Mitsubishi Motors. Ghosn will take on the position of Chairman and oversee Nissan and Mitsubishi’s plans to exchange technologies, like Mitsubishi’s gas-electric hybrid system, and cut costs [15]. Hopefully the Alliance will use what is now an even bigger platform to partner with governments to increase EV infrastructure, increase EV use and combat climate change.

[8] The second life of a battery, from Renault website, https://group.renault.com/en/commitments/environment/cop21-en/, accessed November 2016.

Exxon Mobil and the Future of Climate Change

Student comments on The Renault-Nissan Alliance: How the global leader in electric vehicles is combating climate change