The National Wildlife Federation is a non-profit organization dedicated to (A) The preservation of wildlife, (B) The Protection of the ecosystem and species’ habitats, and (C) The cultivation and development of future conservationists. Each of these goals will be negatively impacted by climate change’s physical consequences –as well as the provided substantial opportunity from the likely resulting regulatory and behavioral adaptations thereof.

(A) The preservation of wildlife

The preservation of wildlife and a diversity of species will likely increase in complexity and difficulty many fold over the coming years due to the burdens brought on by climate change’s physical manifestations. Numerous studies emphasize that wildlife extinction is set to rise significantly during this century. For example, many species of frogs – considered to be extinction-prone groups – are expected to reduce in population from between 39-96% over the coming 100 years [1]. In particular, studies aggregating individual hypotheses such as the above show that leading scientists, on average, believe that up to 17% of species may go extinct this century, with species of Australia, New Zealand and South America the most impacted [2]. In general, this significant increase in endangered species will put significant strain on The National Wildlife Federation’s operations – overburdening increasingly and likely at an exponential rate as time elapses.

Regulatory and behavioral changes stemmed from species loss have already begun to push for the protection of single species from extinction. That said, many conservationists are unhappy with this – rather arguing that a more grand notion regarding the savior of entire ecosystems is necessary for the true survival of species not completely reliant on mankind [3].

(B) The protection of the ecosystem and habitats

Contributing to the extinction of wildlife species is the destruction of ecosystems serving as habitats to a delicate balance of wildlife. Studies show how the physical destruction to ecosystems caused by climate change can cause “ecosystem service debt” which in turn places more of a burden on other ecosystems, ultimately increasing the probability of collapse of many habitats around the world [4]. Protecting each additional ecosystem will becoming increasingly important.

It is believed that significant improvements may be made to the marine ecosystem through ecosystem-based adaptation in fisheries in addition to augmented aquaculture practices [5]. This is one example of how behavioral changes may ameliorate certain climate change caused physical manifestations – with government in particular holding the ability to incentivize such behaviors. Free markets may additionally incentivize change via diminishing returns of traditional practices (as fish ecosystems die out, for example).

(C) The cultivation and development of future conservationists

It is not significantly difficult to imagine that despite somewhat lukewarm acceptance over the past few years of climate change’s future ill effects [6], the acceptance of climate will become increasingly accepted as time elapses, ecosystems are destroyed and businesses/individuals are further affected. 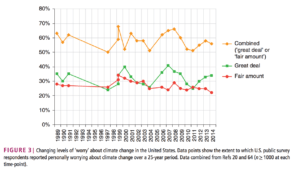 There are two main areas in which the National Wildlife Federation may easily buttress their support of wildlife, various ecosystems and the growth of conservationists: (A) Increased multi-zone negotiations and (B) Further augmented programs for children, teens and young adults.

It has been shown that one of the main issues challenging the survival of some of the largest ecosystems serving as a haven to much of the world’s biodiversity is that of the free rider problem. In particular, many of these ecosystems – e.g., the Amazon Rainforest – consist of multi-zone artificial constructs – e.g., multiple countries – from which human political consensus is very difficult. No one player wants to act first or devote more resources than another, often seeing this solution as ‘unfair’ [7]. In order to resolve this it is increasingly important to provide open communication and transparency. I believe that the National Wildlife Federation may be able to leverage its governmental relations and noble cause to enhance cross-border relations, greatly benefitting these expansive and diverse ecosystems.

Additionally while the National Wildlife Federation does offer programs for children I believe that they may do a significantly better job by leveraging technology to fully immerse children, teens and young adults in locations and situations that exemplify problems facing wildlife and the ecosystem. Virtual reality may be used to bring students to endangered areas, student-run simulations may be used to show how many species may disappear under different conditions and assumptions, and video chat may be used to connect interested individuals with passionate researchers and advocates.

The National Wildlife Federation may utilize the above to significantly increase the probability of reaching their three goals – increasing the preservation of wildlife and the ecosystem as well as cultivating the new generation of conservationists. Climate change is an issue we all must support to truly overcome before we pass a threshold beyond which no solution is longer possible.