The integration of electronics into our daily lives has been moving increasingly fast thus competitors within the space must move even faster. Samsung Electronics is known for its strong presence in the consumer electronics space. Their hardware can be seen in the hands, living rooms and kitchens of customers worldwide. A benefit to developing great hardware is its endless number of possible uses. A risk is not being able to realize the hardware’s full potential. As Samsung competes within the Internet of Things it must be able to produce software that brings its devices to life in ways never before seen.[1] This is an especially appealing market for Samsung given that by 2025 about seventy-five billion connected devices are expected to be “smart” up from thirty billion in the year 2020 and twenty-three billion in 2018 (Exhibit 1). 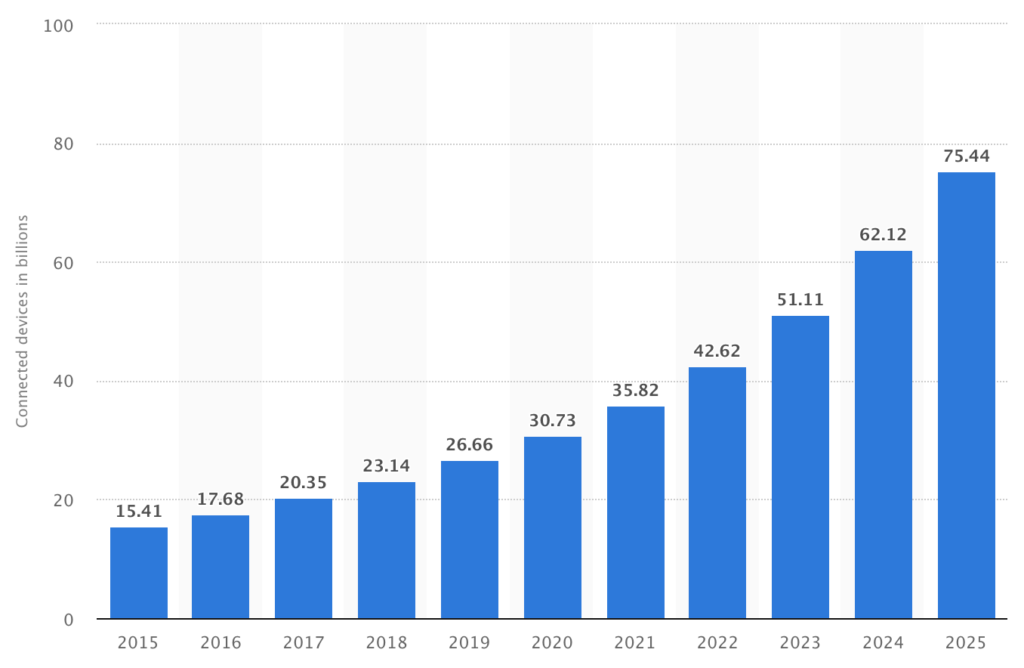 Qualcomm Technologies, my previous employer, has some of the best in industry microprocessor designs in their patent portfolio. Those microprocessors are integrated into mobile device brands ranging from HTC to LG to Samsung. Therefore phone manufacturers will be selling devices with the same chip, raising questions regarding the difference in revenues within their mobile devices divisions. What makes us choose one consumer electronic device company over another? The answer is they have to find ways to get creative. “[Samsung is] very attuned to what competitors are doing and what other people are bringing to market first and observing what seems to be gaining traction, then very rapidly coming up with their own version of that innovation.”[3]  Given their position, Samsung must strengthen their product development strategy. That is where open innovation plays a large role.

Open Innovation allows companies to have access to talent beyond their in-house R&D. Product development comes with many challenges and companies must be fully aware of the repercussions that come along with initiatives designed to give them an edge. The effectiveness of the open innovation process depends on two factors:

Regarding the generation of ideas, as we saw with IDEO, “[i]f ideas for solutions can come from anywhere, then a fundamental statistical principle is that the more ideas generated, the better the quality of the best one is likely to be.”[4] Regarding idea selection, “…opening the idea-selection process can also generate significant value. Outsiders have distinctive expertise and perspectives, which enable them to pick winning ideas. This is particularly true when it involves products that can be used in many ways…” The Internet of Things allows creativity to flow into everyday objects giving rise for a greater need for out of the box thinking.

Samsung has introduced Open Innovation to their product development process through various ways. Relating to short term strategy, Samsung takes feedback from customers on everyday products. For example Samsung’s “smart” washing machine features were developed thanks to Australian users. “[The Australian Samsung team took Australian’s] feedback to HQ and they implemented it in [their] flagship machines worldwide.”[5] Samsung also allows communities of software developers to work on beta versions of their hardware in order to develop IoT applications. A strategy that will be beneficial in the long term comes from the understanding that others are already working on some of the problems they need to solve. “The Samsung Global Innovation Center is boosting Samsung’s software strategy in a major way. Founded in 2013, GIC’s mission is to evolve Samsung from a hardware-driven company, to one that also leads in software and services. engages with entrepreneurs in a variety of ways, offering them more opportunities than investments would alone.”[6]

To address the need for competitive ideas, I would recommend allowing all company employees a certain amount of freedom to contribute to projects outside of assigned ones. Large companies tend to lock employees into a role ignoring a large amount of potential. I would also recommend a strategy to train managers to identify good ideas and avoid biases when reviewing those ideas given that idea selection can sometime be even more important than idea generation.

My main concern with open innovation is related to the idea tracking practices of Samsung, because it is unclear what ideas came from where and how they go about their selection process. I would be interested in knowing if they have ever received an idea which they turned down and a competitor saw success with it. If so, could this help identify flaws within their current processes? The ability of Samsung to understand the best innovation strategy for its goals is critical to its competitive advantage within a world of interconnected objects. This means avoiding the better-than-average mindset, only then will it be able to compete with the other big players in the Internet of Things space. (791)

1 The Internet of Thing refers to devices/objects that are connected to a network with the ability to provide and receive data.

It’s Only A Matter Of Time: ML Sets Its Sights On Your Calendar

Student comments on The Internet of Things: How will Samsung bring their A-game?