Recent analysis of health outcomes in the U.S. has highlighted that factors outside of the traditional provision of health care – such as housing, education, employment, and access to healthy food – contribute heavily to the health equity of individuals and communities [1].  While the consideration of these factors, often referred to as the ¨social determinants of health¨, has been embraced by the payers of healthcare (namely, the U.S. government and private health insurers), one determinant has remained largely out of the focus of the payer community: the impact of climate change on population health. 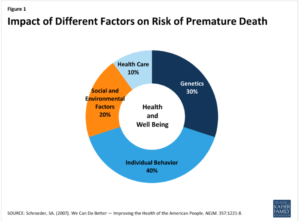 However, an increase in climate-induced threats to health, such as vector-borne disease and temperature-related deaths, has encouraged government-sponsored research into the arena, and the findings suggest that the payer community should begin to think harder about the efforts they are taking to mitigate and adapt to climate change [2].  Aetna, one of the five largest private insurers in the U.S., has made small steps in the right direction but should consider more drastic measures to incorporate climate change in its comprehensive patient care protocols.

The Impact of Climate Change on U.S. Population Health

While many consider themselves insulated from climate change if they do not live in a coastal region prone to flooding or hurricanes, or an arid region subjected to fires, a 2016 publication by the U.S. National Science and Technology Council [2] explains that climate change driven by greenhouse gas emissions is presently having far reaching, and intense effects on U.S. public health, in a variety of ways, including:

Contributors to The Lancet, one of the world’s oldest and most highly regarded medical journals, warned that climate change can “undermine the last 50 years of gains in public health” [3].  These authors argue further that the impact is most dramatic on populations who are already at-risk: the low-income, the elderly or mothers and newborns [3].  From the perspective of a health plan like Aetna, these populations are the most expensive to care for today, and special attention should be paid to their vulnerability to environmental factors, which could amplify their risk profile and overall cost of care. 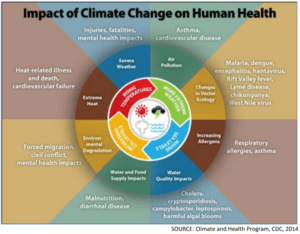 The Payer Response to Climate Change

It would seem logical for health plans to account for this risk in the way they reimburse patient care and interact with patients and providers.  Unfortunately, a 2016 study conducted by sustainability non-profit Ceres Group on the quality and comprehensiveness of climate risk disclosures by insurers demonstrated that upon analysis of nearly 150 companies, ¨no health insurers´ disclosures indicated that they are holistically considering climate risk across their various business lines and in investments¨, and that health insurers performed the worst of all lines of insurance (including property & casualty and life) in terms of the quality of their disclosures, despite climate change ¨having significant public health impacts now, with worsening outcomes anticipated in the future, particularly if greenhouse gas emissions are not reduced¨ [4].

Aetna, one of the largest and most profitable U.S. health plans, has revealed its plans to combat climate change by committing to reducing its own internal greenhouse gas footprint, through activities such as decreasing emissions, saving water and energy, using renewable energy and recycling [5].  While these are admirable and undoubtedly significant near-term steps for a company with 50,000 employees, Aetna’s position does not indicate an appreciation for the urgency of this issue.  I would expect and hope Aetna to publicly pronounce:

How Much is Enough?

Payers of healthcare like Aetna have a long list of initiatives they could tackle within the umbrella of the social determinants of health.  How much should Aetna invest in this issue, relative to other important causes like education and employment?  How should Aetna work with the other managed care plans in the U.S., who also wield heft from financial and advocacy perspectives?  Would investors deem it appropriate for Aetna to channel resources into an issue they might have little control over?  And while the answers to these questions may not be obvious, the impact of climate change on the health of Aetna´s members appears clearer each year as new records of temperature and greenhouse gas emissions are set (790 words).

Ghosts in the power machine

Tesla Shoots Itself in Its Blue Suede Shoes

Student comments on The Impact of Climate Change on U.S. Health: Is Aetna Planning Appropriately?