The United States Department of Defense faces a new, insidious enemy—a threat that can destroy key U.S. bases, weaken allies, and strike deep within the homeland [1].

What Is the Threat?

According to the Department of Defense, climate change is a “threat multiplier” because its effects “will intensify the challenges of global instability, hunger, poverty and conflict” [2].  Rising sea levels and more frequent extreme weather events will have a direct impact on the United States’ strategic and defensive interest,  But climate change is also indirectly threatening the United States, and is expected to generate more political instability and mass migrations in decades to come.

Rising Sea Levels.  Rising sea levels will increasingly threaten strategic military bases in the United States and throughout the world.  NASA estimates that global sea levels rose an average of 6.7 inches (17 centimeters) during the 20th century [3], and may rise as much as 3 feet or more during the 21st century [4].

Consequently, as many as 19 key military bases may be jeopardized by rising sea levels [5].  For example, one study estimates that four bases, including NAS Key West, are at risk of losing 75-95% of their land by 2100 (see chart below) [6].  The Department of Defense will need to decide between environmental mitigation, land reclamation or complete relocation strategies for these bases [7]. 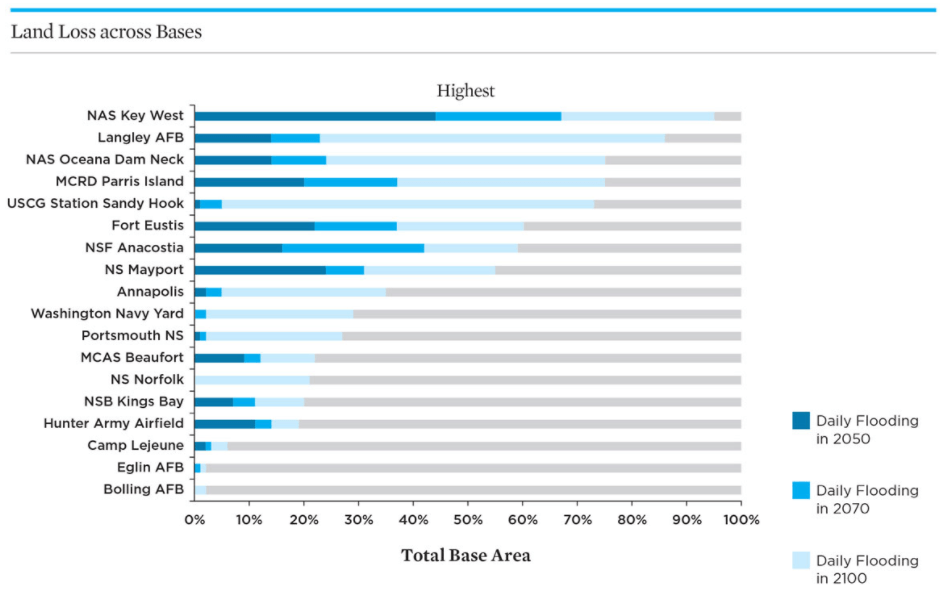 Unpredictable, Extreme Weather.  Event attribution—especially in the case of climate change—remains a probabilistic science [8].  However, annual reports by the National Oceanic and Atmospheric Administration (NOAA) have repeatedly cited climate change as an influencing factor for extreme weather and climate events [9].

“Mankind’s relationship with the natural world is aggravating these problems and is a potential source of crisis,” admits U.S. Central Intelligence Agency Director John O. Brennan, “Extreme weather, along with public policies affecting food and water suppliers, can worsen or create humanitarian crises.  Of most immediate concern, sharply reduced crop yields in multiple places simultaneously could trigger a shock in food prices with devastating effect, especially in already fragile regions such as Africa, the Middle East, and South Asia” [12].

The Department of Defense now recognizes climate change as “a present security threat, not strictly a long-term risk” [13].

Unfortunately, these dual strategies are reactive, and only deal with the symptoms of climate change.  Even the three goals outlined in the Department of Defense’s Climate Change Adaptation Roadmap—to identify and assess the effects of climate change, to incorporate climate change considerations across the full range of missions and activities, and to collaborate with internal and external entities to understand, assess and respond to climate change realities—do not address the root of the problem.

In the case of climate change, the Department of Defense should heed the advice of one of their most respected strategists.  More than two thousand years ago, Sun Tzu advised that “[s]ecurity against defeat implies defensive tactics,” but the “ability to defeat the enemy means taking the offensive” [16].

Otherwise, the “Hot War” of the 21st Century might be our last war.

[6]  “The US Military on the Front Lines of Rising Seas,” Union of Concerned Scientists (accessed November 2016), available at http://www.ucsusa.org/sites/default/files/attach/2016/07/front-lines-of-rising-seas-key-findings.pdf.

[8]  Explaining Extreme Events of 2014 from a Climate Perspective, Bulletin of the American Meteorological Society, Vol. 96, No. 12 (December 2015), available at http://journals.ametsoc.org/doi/pdf/10.1175/BAMS-ExplainingExtremeEvents2014.1.

Student comments on The “Hot War”: How Will the Department of Defense Fight a Warming Planet?