It is a truth universally acknowledged that Netflix has changed the entertainment business. Additionally, high speed wireless internet and multiple viewing devices mean that viewers don’t consume content the same way they used to; around a TV screen or in the movie theater. They choose what they watch and when and where they watch it. As the conventional delivery model for entertainment becomes antiquated, so do the business models and supply chains associated with it. Companies that saw and adapted to this change (Netflix, Amazon) have seen record growth in share prices, while those that haven’t have struggled [1].

2017/2018 is the year the old guard responds. Disney has pulled all its content from Netflix, is launching its own streaming service and is rumored to be interested in buying 21st Century Fox, an erstwhile rival. Time Warner and AT&T are in the middle of a $85 billion merger in a deal that creates an end-end content and connectivity behemoth. For this discussion, we focus on Disney-Fox.

How did we get here?

To understand the causes and implications of the changes we are seeing right now, we need to understand the conventional media supply chain. Ben Thompson (of Stratechery) explains this best, “Nearly all media in the pre-Internet era had two parts to the model when it came to making money – distribution and then integration — and the order matters [3].”

The media entity (newspapers, record labels and movie studios) developed and aggregated content which it then sold to distributors.

The distributors, which included cable companies (e.g. Comcast) and ISPs (e.g. AT&T), laid down the “pipes” to deliver the content and charged customers monthly subscription fees to recover the massive upfront, fixed costs that they had invested in the infrastructure.

Widespread access to the internet has changed this model in one fundamental way; it has brought the distribution cost close to zero. Consequentially, media entities don’t need to go through distributors to reach their customers anymore and distributors struggle to recover their initial investment.  This effect is perhaps clearest in the print industry. The print media model relied heavily on advertising revenue. Advertisers paid for ads in newspapers because it enabled them to reach consumers. Facebook and Google allowed advertisers to skip distributors and go directly to customers [4] and newspapers went out of business.

At its essence, this is a drastic change in the media supply chain and has now spread to the TV industry. Companies are using the internet to directly engage with customers and the “workers” on the old “assembly line” have struggled to get to grips with the new one.

What does the Disney – Fox deal really mean?

Both Disney and 21st Century Fox (like most other media conglomerates) have two main categories of content, (i) live TV (includes sports and news) and (ii) differentiated content (includes movies, TV shows). While the former is well suited to the conventional cable TV model (at least for the foreseeable future), the latter is best delivered through a video on demand service. As the figure below shows, currently Disney and Fox both have a mix of these two content types. 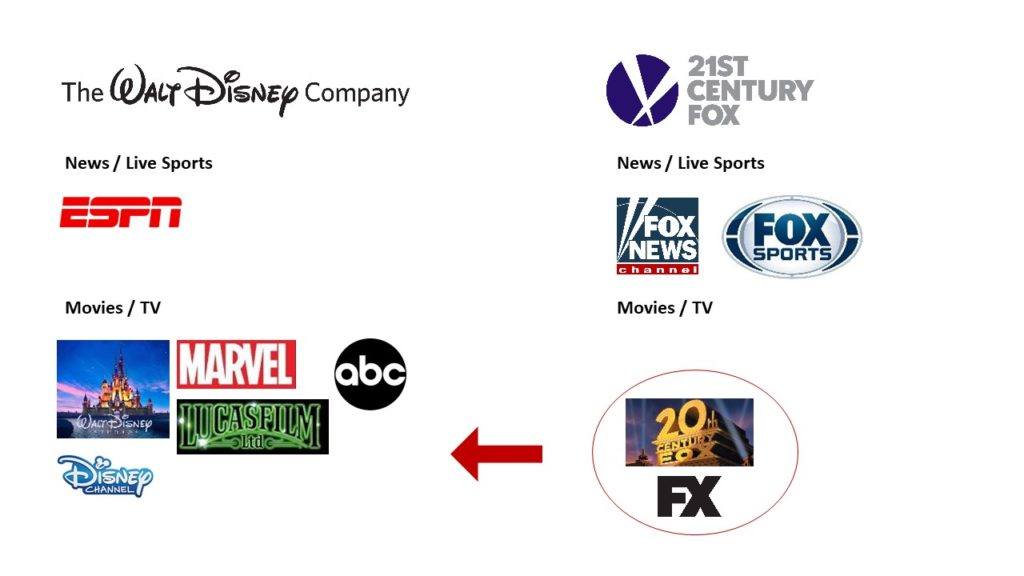 The proposed deal (said to include 20th Century Fox and FX) would provide Disney with an unrivalled and highly differentiated content library, providing ammunition for its upcoming streaming service [5]. On the other hand, Fox would be a leaner organization focused on its very profitable live news and sports assets. In this scenario, Fox could continue operating its business in the traditional TV model. Interestingly, the deal points to the two different paths media companies could take in the post-Netflix world; live TV like Fox or content on demand like Disney (excluding ESPN).

This is likely to be the first move in a prolonged game of chess which could see consolidation and mergers across entertainment, connectivity and big tech. Consequentially, it offers us several avenues for further discussion and reflection.

Firstly, where is this consolidation likely to end? Assuming the Disney and Fox merger goes through, the combined entity is a treasure trove of content for a potential distribution platform with deep pockets. Apple, for instance, with a market cap of $905 billion is bigger than Time Warner, Comcast, Disney, Viacom, Fox, Sony and CBS combined [6]. It also has a close working relationship with Disney (going back to Pixar) and was the subject of speculation regarding a $237 billion acquisition earlier this year [7].

Secondly, what does this type and scale of M&A activity mean for anti-trust regulators? For example, The AT&T / Time Warner merger raises serious questions about the future of net neutrality, especially given AT&T owns DirecTV and could theoretically control access to competing platforms.

What is not in dispute is that this grand old industry is changing rapidly and even its most established captains are having to reassess their core business models to survive.

[6] Hollywood Reporter, “What the Heck Is Going on With the Disney-Fox Talks and AT&T-Time Warner Deal?” http://www.hollywoodreporter.com/news/what-heck-is-going-disney-fox-talks-at-t-time-warner-deal-1056455

Udacity and the evolving supply chain for highly technical labor

The effect of digitizing one organization, on over a billion people