Shaky hands? Not on this doctor! In over 3000 operating rooms worldwide, patients are actively being operated on by robotic doctors, hydraulic arms working away to measure, incise, and suture upwards of 200,000 patients each year (1). According to hospitals, “robotic-assisted surgery offers all the benefits of other forms of minimally invasive surgery, including less blood loss, less pain, fewer adhesions, shorter hospital stay, improved cosmesis and quicker recovery”, all of which allow the hospital to turn through more patients faster, with fewer complications and unexpected costs. In most cases the doctor is there in the room, but in the case of St. Joseph’s Hospital in Canada, the doctor may be hundreds of miles away (2). However, over a decade after the first remote surgery, there are still only a handful of facilities that perform surgery this way.

A Short History of Robotic and Remote Surgery

Like many great innovations, the seeds of remote surgery were planted in the government. In the 1970’s NASA proposed the use of remote controlled robots to perform surgical operations on astronauts (2). As part of a Small Business Innovation Research (SBIR) contract, Computer Motion began research on a robotic arm, which was cleared for surgical procedures by the FDA in 2001 (3). At the same time, research on robotic surgery for soldiers was being conducted at for the Defense Advanced Research Project Agency (DARPA) Defense Sciences project (4). After licensing this technology and taking the organization public as Intuitive Surgical in 2000, the new company faced intellectual property litigation from Computer Motion, eventually resolving the dispute through a merger of the two firms in 2003 (5).

While the potential to perform remote surgery was always a goal for both organizations, it was not until 2001 that the transmission speeds were fast enough to carry out a procedure. In that year, a team in New York operated on a patient thousands of miles away in Strasbourg, France using the ZEUS machine in what became known as the “Lindbergh Operation” (6). 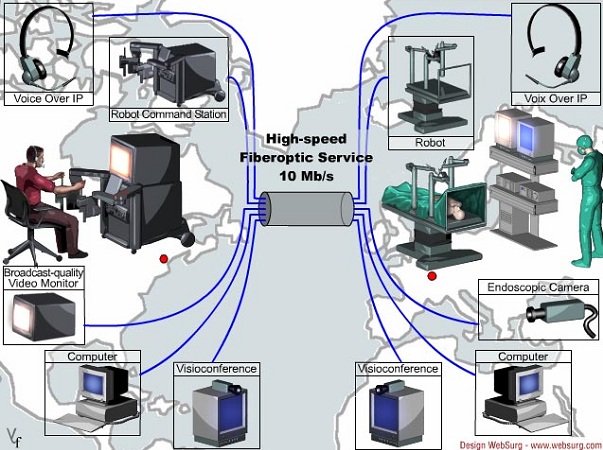 The Future of Remote Surgery

Once surgeries are performed remotely, there are additional benefits. For one, utilization rates of specialists can be higher than in traditional hospitals, which require a flow of patients. As the operator, a class-leading surgeon could perform an operation on a patient in New York and then immediately operate on a patient in Beijing, delivering the highest quality of care anywhere in the world.

Conversely, as a provider you can locate your specialists in the lowest labor cost environments, such as India, that are already experiencing an influx of medical tourism. Instead of flying around the globe, patients can receive care from an Indian specialist from Europe, allowing for a more fluid global ‘supply chain’ of care.

From a societal perspective, remote surgery allows high quality care to delivered in places that are underserved, for example war zones. In Syria, the government has tortured or killed hundreds of doctors, forcing thousands more to flee, leading to a ‘care desert’. If a machine can be controlled and protected by humanitarian organizations, patients can receive the care they need without having each specialization represented in-country (7).

Barriers to Adoption and Next Steps

Despite the many benefits of robotic/ remote surgery, adoption has been limited, due primarily to 1) cost (upwards of $2 million dollars per machine), 2) regulatory ambiguity and 3) limited applicability (8). Addressing cost, Intuitive Surgical should develop multiple tiers of machines, allowing for deployment in scenarios that would otherwise be cost-prohibitive. In the case of regulation, hospitals need to communicate to legislators the benefits that these machines can unlock, presenting a unified front regarding proposed solutions.

To expand applicability, IS needs to continue to invest heavily in haptic feedback technologies that give the operator the ability to ‘feel’ in more sensitive procedures, as well as the integration of AR/ VR that enable a more fluid operator experience. For applicability in a diverse array of procedures such as developing countries or space travel, some baseline degree of automation has to be built into the product, as delays of even a few seconds in feedback can lead to deadly consequences. Without automating certain responses, doctors may not be able to react quickly enough to unexpected complications, such as a ruptured artery, that the machine could theoretically identify and address instantaneously. Surgeons be worried: the ultimate promise of remote surgery will be realized when the surgeon becomes an operator. Wechat – Cleaning up your mobile screen

Student comments on The Doctor is In: Remote Surgery in the Digital Age