Japan is comprised of ten privatized power companies, each covering a specific region.[1] Kansai Electric Power Company (KEPCO) covers the Kansai region of Japan – supplying electricity to over 20 million people (approximately 16% of the population).[1] KEPCO has been the leading power company in Japan to aggressively pursue clean energy initiatives to combat climate change. KEPCO invests heavily in nuclear power and LNG power plants. As of 2011, KEPCO had 11 nuclear power plants and more than half of its electricity were generated from nuclear energy.[2] 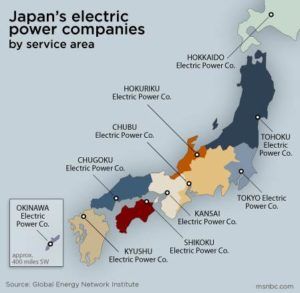 A Nuclear disaster and regulations against nuclear energy

A 9.0 magnitude earthquake struck Japan’s northeast coast on March 11, 2011.[1] What was not expected, however, was the tsunami that followed the earthquake. The tsunami destroyed the nuclear power plants in Fukushima, causing three nuclear meltdowns and the release of radiation. The Japanese government regulated all nuclear power plants in Japan to shut down their operations immediately.

Even though the power plants in Fukushima were owned by Tokyo Electric Power Company (TEPCO), all power companies including KEPCO were heavily criticized by the public for its use of nuclear power plants. KEPCO was forced to shut down all 11 of its nuclear power plants and injunctions were filed against the company from restarting them.[3] Since more than half of KEPCO’s electricity was generated from nuclear energy, the company had to adjust its operations in order to continue to provide electricity to the Kansai region. 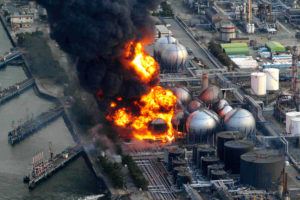 Since 2011, the Japanese government imposed regulations against nuclear energy.  As a result, KEPCO has had to increase its fossil fuel consumption to meet the electricity demands of the people in the Kansai region.[1] The current energy policy landscape in Japan affects KEPCO in multiple ways. First, fossil fuel consumption will continue to rise to cover the capacity of nuclear energy and KEPCO will need to expand and diversify its fossil fuel procurement sources.[4] Second, with increase in GHG emissions, carbon tax costs will increase for the company. KEPCO will incur further losses and will be unable to invest in cost-efficient, clean energy. Furthermore, continuing to be forced to abandon clean energy initiatives may eventually repel revenues from customers who are eco-conscious.

KEPCO now faces the dilemma of pursuing clean energy or investing in fossil fuels. The public views nuclear energy (a form of clean energy) as disastrous and the possible risk of another nuclear disaster greatly outweighs the detrimental effects of climate change.[5] To tackle this dilemma, KEPCO has made the following efforts to bring back clean energy initiatives:

An important work for KEPCO has been to educate the public about the benefits of nuclear power in order to gain support to restart its nuclear power plants.[5] Management continues to invest time and money to communicate to the public about the importance of nuclear power and that a nuclear disaster like Fukushima is extremely rare. Despite these efforts, KEPCO’s nuclear power plants continue to be in injunction and shut down.[5] With this constraint, the company has decided to conduct climate change conscious investments by implementing more efficient fossil fuels. First, KEPCO has implemented a new combined-cycle power plant in Himeji.[6] Combined-cycle power plant allows for a more efficient, low emission alternative to its regular oil and gas power plant.[7] Second, KEPCO also invested to change one of its power plants in Aioi from an oil and gas plant to a LNG plant.[8]

Will KEPCO climb back up the clean energy trail?

KEPCO’s trouble with its clean energy initiative happened because its operational portfolio was dominated by nuclear energy. Although KEPCO’s management hopes that the strong opposition against nuclear energy will subside, it will take time for the company to face the difficult task of regaining the public’s trust. 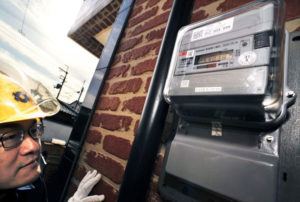 Figure 3: Smart meter set in a home by KEPCO worker

Another possible step for the company is to educate customers about the efficient use of electricity by providing them with smart grid technology.[11] Hoping to make customers more aware and efficient with their electrical usage, smart grid technology records and communicates the electrical usage of homes to customers.[11] KEPCO has an advantage because it has a telecommunication company as its subsidiary and could integrate its resources. By effectively integrating systems instituted by the government with technology, KEPCO may be able to climb back up the clean energy trail.

The Future of Leather

Returning the Motor City to its [Grass] Roots: Can the city that brought us the automobile define a model for the green economy?

Student comments on The dilemma of Kansai Electric Power Company