Rising sea levels caused by climate change pose varying risks to multiple companies, non-profits and organizations. But how should an organization address the challenges of climate change when they not only threaten business operations, but the very livelihood and even existence of an entire nation? 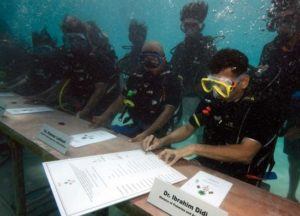 The Maldives is currently facing such a situation. The archipelago nation consisting of nearly 1200 islands is surrounded by rising seas and temperatures that threaten the source of nearly 70% of the country’s GDP – Tourism [1]. As the waters continue to creep towards shore, risking to swallow the nation completely, the nation’s Ministry of Tourism looks to three primary threats to its economic livelihood:

1) Everything Is Not Beachy

With vast coastlines surrounded by the blue of the Indian Ocean, The Maldives is renowned for its beautiful beaches. Nearly 75% of tourism is driven by Beach Holidays [2], and almost all tourist accommodations are within 100 m of the coastline [7]. This draw for tourists is at risk though from rising sea levels and beach erosion. Over 97% of the inhabited islands reported beach erosion [2], and nearly half of the tourist resorts also reported erosion damage caused by increasingly higher water levels [5].

2) Nothing is Better, Down Where It’s Deader, Under the Sea

Below the water’s surface, The Maldives also attracts tourists with its rich biodiversity. With the seventh largest coral reef system globally [5], tourists flock to The Maldives for excellent snorkeling and diving. However, climate change is endangering this fragile natural resource. The living coral reefs are highly susceptible to the rising water temperatures, and the impact of climate change has been a phenomena called Coral Bleaching that destroys the once rich underwater environment [3]. Since coral reefs are the foundation of the aquatic ecosystem, all of The Maldives’ biodiversity is threatened as the reefs slowly fall apart. 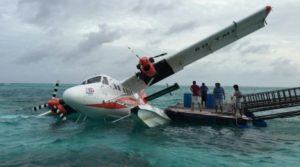 In addition to the natural resources at risk from climate change, the man-made infrastructure supporting the tourism industry also faces challenges from rising sea levels. With approximately 90% of resort infrastructure within 100 m of a coastline only 1.5 m above sea level [7][5], any increases in sea level threaten to significantly impair the nation overall. Furthermore, the tourism industry’s most utilized point of entry, Male’ International Airport, is particularly at risk with over 30% of its infrastructure within 50 m of the coast and only 1.1 m above sea level [2][7]. As the water continues to rise, the primary source of nearly all tourism could be completely cut off with any damages to Male’ International Airport’s infrastructure.

To ensure tourism and economic operations can continue in spite of climate changes, The Maldives Ministry of Tourism launched the Tourism Adaptation Project. This joint venture between public and private sectors seeks to mitigate the impacts of rising sea levels and temperatures through a myriad of operational enhancements and alterations.

Certain mitigation techniques are very short-term focused. One solution to the concerns around coastline erosion are to utilize beach nourishment techniques [11]. Popular among beachfront resorts, sediment and sand would be moved from different areas of the archipelago and pumped into eroded beaches, repairing eroded areas for a quick, albeit temporary fix. [4]

A more lasting solution involves the usage of organic solutions. On the erosion side, one such strategy is to plant vegetation such as mangroves around the coastline [7]. Studies have shown that the plants not only weaken waves caused by rising sea levels and weather, thereby decreasing erosion, but are also useful in improving biodiversity as well [8]. Utilizing organic solutions is also effective in addressing the risks to coral reefs. By planting either actual or artificial coral reefs, the aquatic ecosystem can be stabilized thus driving sustainability to biodiversity, and subsequently the snorkeling and diving industries. [6][10]

While the Ministry’s Adaptation Project provides many defenses from the impacts of climate change, they are mostly short-term responses rather than actual lasting solutions. Safeguards can be introduced and emissions cut within the country, but the global problem of climate change will still threaten the nation. In order to ensure sustainability of tourism and The Maldives itself, the country has pushed for multilateral policy changes urging other nations to adopt climate change mitigation agreements such as the Paris Climate Agreement [12]. Only by looking for a global solution to this shared problem can the natural beauty of The Maldives be preserved for generations of tourists to come.

[10] Clark, S., and A. J. Edwards. “An evaluation of artificial reef structures as tools for marine habitat rehabilitation in the Maldives.” Aquatic Conservation: Marine and Freshwater Ecosystems 9, no. 1 (1999): 5-21. Accessed November 2016.

Nestle – Ready for the next 150 Years in (Climate) changing times?