Tesla challenges operational norms through their manufacturing and car-making endeavors. They produce electric vehicles with designs and features that are not found on any other automobiles. Furthermore, Tesla does not even sell its cars through a traditional dealership model. But the biggest difference of all is Tesla’s push against globalization, eschewing global trade and choosing instead to insource their manufacturing needs.

For decades, the expansion of global trade has spurred the growth of produced goods, under the thought that “trade is the economic glue that connects the world economy” [2].  For manufacturers, trade has not only increased the footprint of finished goods shipment but has also decreased the costs of parts and materials. Analyses of plant-level data in manufacturing have corroborated these findings; a study across electronics manufacturing plants in Ireland demonstrated that outsourcing material inputs had a direct and positive impact on the plants’ profitability, and this impact grew as plant sizes increased [3]. The clear method to success in manufacturing was thought to be continued outsourcing as you grow in scale.

However, two recent changes have hurt the advantages previously observed from outsourcing parts in manufacturing. The first change involves increased regulation and anti-outsourcing provisions by governments around the world. The Global Trade Alert, which monitors these regulations, says there have been “nearly 350 regulations imposed world-wide since November 2008 requiring local sourcing, hiring or operations, including a profusion of Buy America provisions in the Obama administration” [4]. These requirements eliminate the possibilities of outsourcing or make the cost hurdle of doing so far steeper than it would have been in an unregulated market. The second change is the rapidly decreasing cost of producing parts in-house. According to a recent report from The Economist, “As the price of capital goods continues to fall sharply, places with large pools of cheap labour, such as India or Africa, will find it harder to break into global supply chains” [5]. This is because automated production from the low capital costs outweighs the labor benefits of outsourcing, making it cheaper for companies to produce the items in-house.

Tesla is using the changing landscape and recent decline of globalization to their advantage. According to American University’s Made In America Auto Index, Tesla’s Model 3 will have 95% of its parts manufactured in the United States; in comparison, the next two vehicles include the Buick Enclave (90% of parts manufactures in the US) and the Ford F150 (85% of parts manufactured in the US) [6]. What is perhaps even more significant is the fact that Tesla is not only manufacturing these parts in the United States, but that Tesla is manufacturing these parts in-house. Tesla has embraced a “we’ll do it ourselves; we’ll change the mold” philosophy for almost all parts throughout the vehicle, including the vehicle seats [7]. Traditionally, auto manufacturers outsource seat production due to high labor and design costs; in contrast, Tesla created their own seat assembly line in a “commitment to a vertical integration strategy not seen in the auto industry for decades” [7]. Tesla is further pushing away from outsourcing as they set up their Gigafactory, where they have been building and assembling batteries for vehicles and other products.

These large moves against globalization put Tesla in a unique position to shrink their supply chain through internal production both in the short- and medium-term, but this has not come without a cost. Tesla has yet to turn a financial profit and continues to spend at a growing rate to build parts internally. Capital expenses were $1.1 billion USD in the 3rd quarter of 2017 and the company to reach out for an additional $4.1 billion USD in financing in 2017 to stay afloat [8]. The chart below shows the rise in spending needed to keep up with Tesla’s strategy. The increasing financial expense of Tesla’s insourcing leads to one very valid question: At what point does Tesla draw a line in the sand on building in-house versus finding strategic partners? 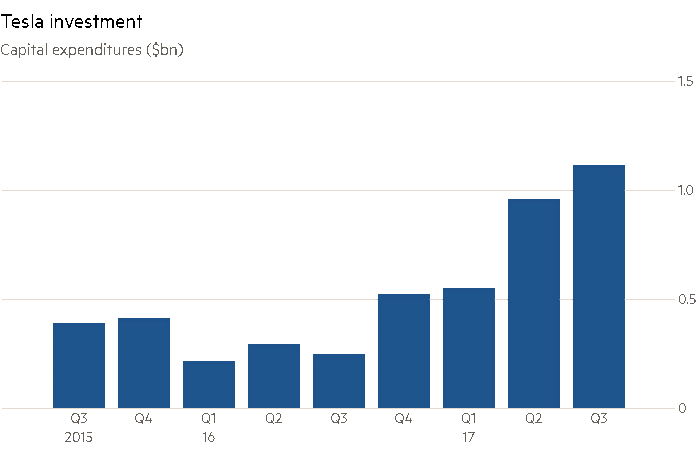 Additionally, there are limitations to Tesla’s strategy based on greater macroeconomic trends. Externalities such as rising raw material costs or economic trends that decrease consumer demand for their products could disrupt Tesla’s business model. To mitigate these issues, Tesla has a pre-order system for their products and they likely have contracts for their material purchases. These stop-gaps are near-term solutions, so Tesla may need to find more sustainable partnerships to keep costs down and demand up.

Despite the challenges, Tesla is pushing forward— and it is likely that manufacturers across all industries are watching. Will other companies, inspired by Tesla, start producing more in-house? Tesla’s success or failure could set a precedent, but it could also prove once and for all that globalization is needed for financial success in product manufacturing.

Tata – Leading the way in dealing with Steel’s black sheep?

Student comments on Tesla Versus the World: Can Insourcing Beat Outsourcing?