There’s one thing we can all agree on: our love of Coca-Cola products. Soda, juice, water – The Coca-Cola Company (“TCCC”) has something for everyone, everywhere. According to their latest Annual Report, TCCC operates in 200+ countries and owns 500+ brands, bringing in revenue of $44 billion (2015).[1]

Essential to TCCC beverage production is, of course, water. Water comprises approximately 90-99% of the ingredients in soft drinks and TCCC uses approximately 300 billion liters of it a year.[2],[3] The increasing impact of climate change – prolonged droughts, major flooding, rising sea levels – has confronted the company with new challenges that impact its main ingredient and how it distributes its products to consumers globally.[4] At the same time, these challenges present TCCC with opportunities to eventually reduce costs and meet rising consumer demand for cold beverages.[5]

As the world’s temperature rises, regions globally have experienced droughts.[6] And, sea levels are rising due to melting land-based ice, allowing salty ocean water to muddy freshwater sources. [7],[8] Therefore, the main input into TCCC’s products has become harder to come by. Coupled with the agriculture’s increasing need for freshwater, access to quality water is becoming increasingly expensive.

Additionally, extreme weather impacts like flooding threaten to disrupt the day-to-day operation of TCCC’s supply chain. For example, flooding in certain areas near TCCC’s manufacturing or distribution plants may impact its ability to supply customer orders and receive supplies from its providers.[9] Long-term, coastal erosion and other geographical changes in TCCC’s 200+ markets could impact the very existence of its local operations. When people eventually migrate away from coasts, the makeup of the different nodes in TCCC’s distribution system and the way in which it allocates resources to its markets is also likely to change.

Amidst these threats, however, is an opportunity that seems ironic. When it’s swelteringly hot, what are you craving? Like most people, you need a cold drink! So, the same forces that are impacting TCCC’s ability to produce the product and deliver the product are actually causing the demand for TCCC’s product to rise. Complicating matters even further, TCCC’s day-to-day operations through its manufacturing plants, distribution fleet, and cold drink equipment (which all in some way or another produce emissions that are harmful to the environment) are feeding both the threats and opportunities for the business. 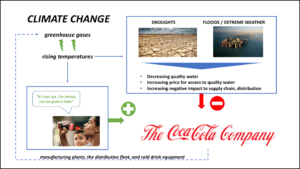 Seeing these fundamental changes confronting its business, TCCC has taken action, limiting some negative environmental impacts of its operations in three main areas:

These initiatives are in fact successful, demonstrating that TCCC is doing its part in curbing climate change. Given its size and global reach, it can even make a dent in its customers’ practices. For example, after implementing its energy management system for its refrigeration network, TCCC saved its customers $300 million annually from reduced electricity consumption.11 Their efforts are important also because the government could impose regulation that may not give them a choice in these efforts; getting ahead of the curve is wise from a cost perspective. Perhaps most importantly, TCCC launched efforts to reduce the net amount of water it removes from the system by returning “nearly 192 billion liters of water to nature” and reducing the ratio of water used in manufacturing to beverages sold from 2.7:1 ten years ago to 2:1 today.[13]

TCCC cannot turn the tide of climate change singlehandedly. Temperatures will continue to rise. So taking advantage of the favorable demand that hot temperatures bring to their products, is, at its core, a wise business move.

Given water’s critical role in many aspects of its business, I’m surprised there hasn’t been more desalination efforts. While it’s expensive, it may eventually be the only way to access clean water. Additionally, TCCC should start considering the sociopolitical implications stemming from climate change, like lack of clean water. Social/political uprisings may occur, negatively impacting its ability to operate in certain markets. And, the general shift of people that may occur away from coasts will fundamentally alter the consumers TCCC serves and how it serves them. If they aren’t already, TCCC should be creating forecasts on potential future market compositions and preparing its supply chain to be agile to meet these changes.

TCCC’s efforts to limit its use of natural resources while growing its business are impressive and may be enough to allow consumers to sustainably Taste the Feeling. Compounding effects of climate change globally and difficulties in turning a profit, however, will determine if they will just fizzle out.