Craft breweries (breweries producing 15000 barrels of beer or fewer per year) are on the rise. [1]  In the United States the craft segment grew by 12.8% in 2015 despite a 0.2% decline in the industry overall. [2]  Beer is made from water, barley, hops, and yeast, but despite is simplistic recipe it is remarkably resource- and energy-intensive to produce: a liter of beer can require 7-10 liters of water to produce [3], and the brewing process alone can consume 7% of a brewery facility’s electricity and 45% of its natural gas [4].  Rising energy costs and resource pressures brought by global climate change are beginning to plague the beer industry at large, however.  Brewery Vivant, a brewpub in Grand Rapids MI, has embraced sustainability since its inception.  Its LEED certificate, granted in 2012, made it the first LEED-certified brewery in the country, and it publishes an annual sustainability report detailing green improvements in its facility.  While increased demand drove increased usage of electricity (up 14.7%) and natural gas (up 2%) in 2015, Vivant’s involvement with carbon offsets decreased its overall carbon footprint by a net 27.1% [5].  As climate change threatens to make these resources more scarce, however, what can Vivant learn from other brewers?

California is a brewing capital – San Diego county alone boasts 130 active brewing operations [6].  However, California also finds itself the epicenter of a prolonged drought: over 60% of the state is in a state of at least Severe drought as of November 2016 [7].  This places a premium on water usage in the state.  Northern California-based Sierra Nevada Brewing also publishes a report detailing green efforts.  Since 2007, Sierra Nevada has reduced water required to produce one barrel of beer by 25%, and it set a goal in 2014 to achieve a process requiring only 4 liters of water per liter of product [8].  Sierra Nevada’s water reduction efforts range from straightforward (the use of desert-friendly landscaping) to more innovative (the phasing out of water-based lubricants on machinery).  The need to conserve water is not lost on “big beer” either: multinational giant AB InBev recently achieved an industry-leading ratio of 3.2 liters of water per liter of beer produced [9].  While ratios this low would be extremely difficult for smaller players to achieve, they show that massive improvement on the status quo for beer production is possible. 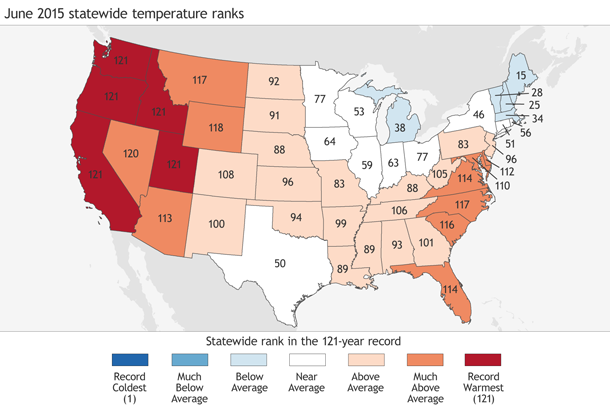 The Yakima Valley in Washington state is a major source of hops used in American craft beer, and Washington state accounted for 73% of the American hop crop in 2015-2016 (10).  In 2015 Washington was also one of the states affected by record-high temperatures (Figure 1), and while the temperatures only minimally affected the hop crop overall, certain commonly used varietals did yield more poorly [11][12].  Growers compensated by leaving land unplanted and concentrating irrigation resources on high-value hop crops, and by employing groundwater irrigation work-arounds.  While the 2015-2016 yield was on the whole successful, hop shortage is ever-present in the minds of brewers, especially with so much of the crop concentrated in one geographic area.  A hop crop can yield as much as $10,000 per acre, making smaller and more environmentally conscious organic operations an attractive financial prospect.  Some breweries, like Sierra Nevada, have started small organic operations themselves, but one operation can yield enough hops for only one limited release of a single type of beer [13].  It remains to be seen how the agricultural industry will respond – hops are notoriously difficult to grow but extremely lucrative and significant additional scale is needed.

As for barley, the world’s largest brewers are pursuing more scientific means.  AB InBev is pouring resources into its SmartBarley platform, which provides a suite of analysis and benchmarking tools to help its grower platform more effectively supply barley for brewing.  The platform analyzes not only water usage, but also soil profiles, climate, and topography data to help farmers maximize yields per unit land [14].  The platform results in more productive agricultural practices that may filter into the industry as a whole, allowing barley for brewing to be provided for less resources.  Danish brewing giant Carlsberg is employing a team of scientists to analyze barley genetically; they have already developed a strain that results in a beer that stays fresher longer, cutting down on spoiled beer waste [15].

As climate change puts a premium on resources, it is incumbent on brewers like Vivant to adapt with the changes.  Smaller breweries will need to learn from the wealth of analysis provided by industry leaders to secure their ingredient supplies and to operate more sustainably.  I hope sincerely that process innovations like the ones mentioned will allow craft brewing to weather the changes brought by climate change.