Solar energy adoption has seen a massive uptick in USA, with the installed capacity doubling last year to 14626 MW1. 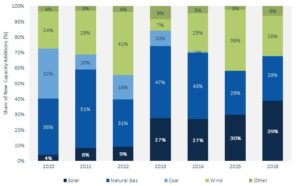 This growth has been predominantly supported by declining cost of solar energy2. 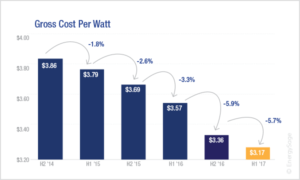 However, in this booming market an unexpected threat has come from isolationistic trade policies for the second largest solar company in USA, SunPower. Two American solar manufacturers have petitioned the International trade commission by invoking Section 201 of Federal Trade Law (under which the President of USA has broad authority to impose tariffs for protecting a domestic industry3) by claiming that the flood of subsidized imports of Photovoltaic cells from china has forced many US manufacturers of solar cells into bankruptcy.

The trade commission has recommended (to the President) tariffs of upto 35% on solar equipment containing crystalline silicon photovoltaic (CSPV) cells purchased from abroad. With such a tariff solar energy will become more expensive and its adoption in USA will reduce4.

As a player in this industry, the shrinkage of market will affect SunPower’s future cash flows and stock price. SunPower is a California based pioneer, manufacturer and installer of high technology solar panels. However, its manufacturing plants are located in Philippines, Malaysia, Mexico, & France. Sun power’s gross margin has been reducing year on year5. Tariffs would increase their cost of revenue and significantly impinge on their profitability.

Furthermore, this tariff is applicable only to CSPV cells and hence doesn’t affect SunPower’s main competitor, First Solar, which uses a different technology (cadmium telluride). This would effectively create a monopoly like industry structure.

Currently, the management of SunPower is opposing the Tariffs with assistance from Solar Energy Industries Association (SEIA) and recommending to the ITC and the President that Tariffs would be harmful for the industry at large. Their arguments are on the following lines: 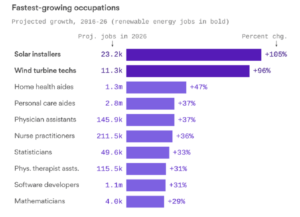 SunPower has currently built up a sizeable inventory of solar panels as a hedge, to assure their ongoing contracts of uninterrupted supply for next 6 months9.

As a plan B, if the tariffs come to effect, they could request for an extension or grace period before Tariffs are applied, to prepare for its impact on business. Subsequently they may have to choose their target markets more stringently considering their comparative costs would rise significantly. They will need to absorb the tariffs inorder to maintain prices in market, which could be compensated for by reduced Marketing, R&D spend or further operational efficiency.

In the medium term, they might need to look at setting up manufacturing facilities in USA and explore bringing in high levels of automation to offset increased labor costs. Furthermore, they would need to explore if overseas manufacturing equipment can be shifted to USA. SunPower could also explore buying any of the bankrupt American manufacturers. This of course depends on whether SunPower’s technology can be manufactured in traditional solar cell manufacturing plants.

Expansion into global markets would help hedge against such trade policy surprises.

While sudden tariffs seem unfair on incumbent players who have built a technological advantage over long years, job protectionism is subject to political opinion. But what about the carbon footprint of importing panels from abroad?

2 Sara Matasci, “How Much does the average solar panel installation cost in the US?” energysage.com, September 16,2017,[http://news.energysage.com/how-much-does-the-average-solar-panel-installation-cost-in-the-u-s/ ] , accessed November 2017.

That’s Off the Chain – AWS Today vs. Decentralized Cloud Storage