In a warming world, one of the most tangible impacts on the Earth will be rising oceans devouring land that was once dry, slowing shrinking the continents. It is likely that by 2100 sea levels will have risen by 2.6 – 6.6 feet due to a combination of melting ice caps and thermal expansion of warming ocean waters.[1] This puts coastal infrastructure at risk for flooding and inundation across all coastal countries. Many major cities throughout the globe are located on coastlines, with many billions of dollars of assets at risk in the US alone.[2] But, rather than try to grapple with scope and magnitude of this risk, I have chosen to focus on a specific yet representative entity as a case study into the effects of climate change: New York City’s Metropolitan Transportation Authority (MTA), which is responsible for public transportation in the city. Unless steps are taken to mitigate the effects of sea level rise, devastating flooding, such as the flooding caused by Hurricane Sandy in 2012 that resulted in $5 billion worth of damage[3], will impact the system with increasing frequency. This is most pertinent to the subterranean subway infrastructure.

How to understand the impact of sea-level rise

One of the most vulnerable inundation points in the city is at the seawall at Battery Park in Lower Manhattan, standing 5.74 feet above sea level. However, this does not mean that flooding will start occurring when sea level rises to 5.75 feet because sea level refers to mean sea level, which is the average of high and low tides. High tides at the Battery are 1.5 feet above mean sea level, thus water will start overtopping the seawall well before mean sea level exceeds the seawall height.[4] Additionally, hurricanes and coastal winter storms affect the New York City region periodically, creating storm surges that exceed typical high tides.

The MTA estimated that the cost of restoring service after Hurricane Sandy hit the city in 2012 was roughly $5 billion.  Of that $5 billion, much of it was due to flooding that was caused when storm surge overtopped seawalls and inundated the low-lying areas in the city. For instance, the price tag associated with restoring South Ferry station, located on the southern tip of Manhattan next to Battery Park, was $600 million.[5] Station damage can be seen in Figure 1. The subway tracks are usually 20 feet below ground[6], allowing floodwaters to penetrate tunnels further inland than the surface flood waters. In a simulation of a storm surge similar to that of Hurricane Sandy, long stretches of Manhattan subway track become flooded in addition to the subway tunnels connecting Brooklyn and Manhattan (see Figure 2).

While Sandy was an anomalously powerful storm, as sea level rises, smaller and smaller storms will be able to create the same impact. 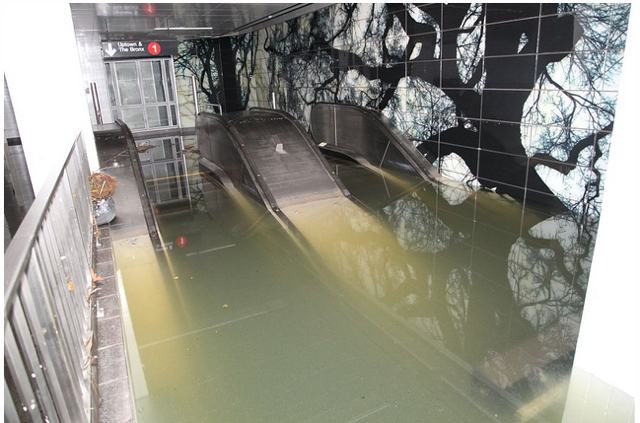 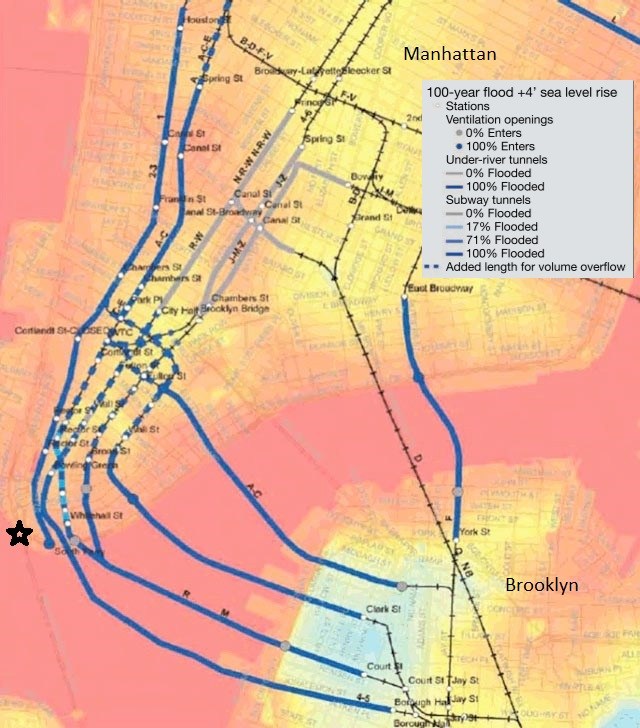 The extensive damage suffered by MTA infrastructure during Hurricane Sandy served as a warning about the impacts of sea level rise. In response to the storm, the MTA created the internal Recovery and Resiliency group to focus on the threat climate change poses to the MTA. This group has come up with both short-term and long-term plans for mitigating the impacts of sea level rise. The short-term plans focus on mitigation techniques such as sealing low-lying subway entry points with both inflatable and rigid barriers. Long-term plans have centered around permanent infrastructure such as the construction of seawalls to protect low-lying track and trainyards.[9],[10]

The mitigation strategy of the MTA is deficient since it does not own or control the fundamental points of vulnerability of its infrastructure, such as the seawall at Battery Park, which is owned by the City of New York.[11] Furthermore, there is a potentially flawed system of incentives in place, whereby local authorities are responsible for mitigation of impacts to climate change, yet the Federal Emergency Management Agency provides relief funds.[12] Having the Federal Government own the responsibility for flood relief and not own the responsibility for flood mitigation might not appropriately incent local authorities to take the necessary long-term actions needed to protect against sea level rise. Looking ahead to the year 2100 when sea level might be upwards of 6 feet higher than current levels, massive urban planning involving the MTA, city, state, and federal agencies must come together create a comprehensive adaptation plan to keep the subway and city afloat. However, the MTA will be tested by transient flooding events well before then.

Why does Syngenta promote synthetic products that increase air pollution?

A longer-term view on saving lives

Student comments on Submerged Subways: How Will the MTA Adapt to Rising Seas?