A slow start for quick and easy mobile payments

We’ve all heard the buzz around the future of mobile payments from the usual tech-giant suspects who launched Android Pay and Apple Pay. Still, we hardly ever see people paying at restaurants or stores with these mobile payment options. Launched in late 2015, Android Pay is Google’s second attempt to break into the mobile wallet space. Google originally launched Google Wallet in 2011 to little success and since repositioned it as a Venmo-like payment service between friends and family. Getting a later start in the space, Apple launched Apple Pay in 2014.

Still, mobile payments have taken off more slowly than many anticipated. Mobile payment systems allow customers to make contactless payments using their smartphone at participating retailers. While smartphone penetration in the United States is nearing 80%1, the same consumers haven’t felt the need to abandon traditional payment methods, and merchants have been hesitant to accept the shift to mobile payments2. After all, is it too much hassle to swipe or insert a credit card to pay for groceries or a cup of coffee?

The only place where I regularly notice mobile payment in action is Starbucks, and customers are not using Android Pay or Apple Pay. Starbucks customers use the Starbucks app. Starbucks managed to get mobile payments right early on, launching a first version of mobile payment through its app in 2011. By 2013, Starbucks was responsible for 90% of the $1.6 billion spent in U.S. stores using a smartphone3. Figure A highlights the subsequent adoption pattern of the Starbucks app’s mobile payment functionality. As of Q3 of 2016, mobile handset payments now account for approximately 26% of Starbucks’ total in-store purchases in the United States2. Per Adam Brotman, Starbucks’ chief digital officer, mobile could account for over 50 percent of transactions in company-owned U.S. stores within a few years4. 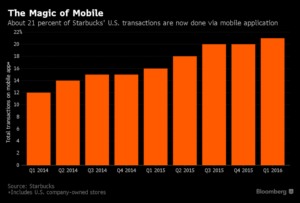 Developed mostly in-house, the Starbucks app has become a key part of the company’s strategy4. How has Starbucks managed to achieve impressive mobile payment penetration by encouraging its customers to adopt the Starbucks app? For one, timing contributed immensely to the app’s stickiness. Since Starbucks launched its own branded mobile payment function before technology companies could successfully enter the space, many users became accustomed to mobile payments through Starbucks first.

Moreover, the Starbucks app combines mobile payment functionality with other features. Basic features include a store locator, Starbucks e-giftcard giving, and music recommendations that link to a user’s Spotify account. Most importantly, the app has always linked to customers’ Starbucks Rewards loyalty program and, more recently, began offering order-ahead capabilities. Loyalty customers dominate Starbucks’ in-store spend, and Starbucks executive Matthew Ryan explains that 38% of spend comes from rewards or gift cards, 33% of which are registered and enrolled in Starbucks Rewards2. The coffee chain’s order-ahead offering, Mobile Order & Pay, launched in late 2015. This added benefit will further boost growing digital sales. Mobile Order & Pay was responsible for 7% of U.S. sales in September, up from 5% in Q2 of 20162. Some locations have up to 20% of orders coming through Mobile Order & Pay during peak hours2.

Could Starbucks license a version of its mobile app to other companies? Would this digital platform work for other companies? While Brotman has acknowledged that the app wouldn’t be available for licensing anytime soon, he also mentioned great, ongoing conversations with other companies4. However, maybe this digital ecosystem only works for Starbucks thanks to a loyal customer base and the habitual nature of drinking coffee.

Should Android Pay and Apple Pay become widely used, will people feel less inclined to use the Starbucks app? Android Pay and Apply also offer compatibility with retailers’ rewards programs. Will these mobile payment systems render the Starbucks app irrelevant? Customers may limit the number of mobile payment systems they use for simplicity’s sake. Customers often have a limited number of apps that they use frequently. Will Starbucks make the cut? Smartphone users might download 40 apps to their phones but regularly use only 155.

How can Starbucks continue to increase app adoption? Customers want the setup of a new app to be fast and simple. Downloading the Starbucks app takes about two minutes, including the time it takes to set up an account. Then, it takes about another minute to set up a payment method by entering credit card information. Some might argue this process takes too long and could discourage adoption. How can Starbucks minimize app setup time? Other apps allow users to skip entering credit card information by capturing pictures of a card. Starbucks might consider adding this feature to reduce barriers to customers fully setting up the Starbucks app.

American Express and The Shift To Digital Payments