While most people associate JFK as NYC’s major international passenger airport, it serves a more vital function as a major shipping, cargo hub, and supply chain participant for North America and its companies.  As the number one airport in North America in terms of cargo value, it is home to ~four million square feet of warehouse and storage facilities, with climate-controlled, cold-chain, and animal handling capabilities [1]. With this much valuable cargo running through JFK, it’s a good thing that it isn’t close to any major bodies of water.

Extreme weather and changing weather patterns are of major concern for the United States’ air travel infrastructure, particularly an airport like JFK.  For JFK, some reports have indicated that certain hurricane categories could put its runways under as much as eleven to fifteen feet of water, the highest total among all major U.S. airports [2,3].  And these extreme weather events are becoming more prevalent with the US incurring 12 of them in 2011, alone [2]. While storm surges of these levels would obviously halt flight operations, it could result in not only safety issues at the airport, but also damage to any cargo held in its warehouse and storage facilities, costing billions in damaged goods and lost time. This issue could be further exacerbated in the future, as increased sea level rise will move JFK into the flood zone in the coming years (Exhibit 1).

Areas in the 100-year flood zone have a 1 percent chance of being flooded annually and are particularly vulnerable to rising sea levels. 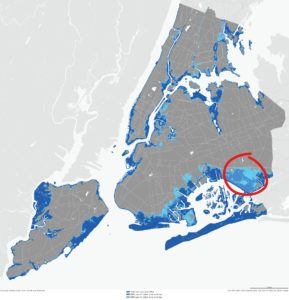 Rising temperatures also can impact JFK.  First, rising temperatures can cause pavement cracking, resulting in higher maintenance and runway repaving costs.  Second, higher temperatures require more cooling use, for both runways and more importantly, JFK’s temperature controlled warehouses [3].  Overall, the rising temperatures result in higher operating costs which can be passed through to its freight customers through higher lease rates.  For JFK to remain the number cargo destination in North America, it must continue to operate an efficient and low-cost airport.  The climate issues raised above could put its position in jeopardy as there are other alternative airports on the east coast that are less susceptible to flooding and rising temperatures [3].

Currently, the PANYNJ has taken actions to address the potential effects of extreme weather and rising temperatures.  For all future runway renovation projects, the PANYNJ will model an anticipated increase in temperature and precipitation levels to maximize the useful life and minimize costs.  For example, in 2010, JFK renovated its longest commercial runway taking these steps and used light-colored concrete, as opposed to more traditional asphalt.  Light-colored concrete absorbs less solar energy than dark-colored asphalt, decreasing the rate of pavement cracking and its associated maintenance costs.  Additionally, the use of light-colored concrete raises the height of runways, helping to alleviate the potential effects from rising sea levels [4].

Over the medium and long-term, PANYNJ is forecasting climate change projections on its major infrastructure assets, including JFK, for three decades 2020s, 2050s and 2080s.  These projections are revisited every two years and are used to assess future maintenance and operations efforts, capital projects, and regulations [5].

In addition to the actions already taken by PANYNJ, additional steps can be taken to mitigate the risks posed by climate change.  In the short term, PANYJN could follow Massport’s lead to address storm surge by investing money into additional flood doors and barriers and portable pumps to keep the airport operating in the event of a major weather event [6].  PANYNJ should also consider the low-hanging fruit for JFK.  Returning to Massport, Logan International Airport decided to relocate all its IT infrastructure to the highest floors of the airport, ensuring all systems remained operational in the event of a storm surge [6].

In the medium term, PANYNJ should consider consolidating rental car and other ancillary airport activities to conserve space which could be used for increased storage and drainage capacity.  An interesting area to consider eliminating at the airport would be parking.  Currently, subway service runs from Manhattan to JFK, albeit at a slow speed.  If PANYNJ were to create a “bullet train” to JFK from Manhattan, it might decrease the number of self-drivers, taxis, and Ubers, creating more space for mitigation systems against storm surges.  An added benefit would also be a decreased carbon footprint from less cars.

While this paper is not suggesting that JFK is in imminent danger of being submerged under water, there are some important questions for PANYNJ, airlines, and freight customers to consider.  For the UPS’ and FedEx’s of the world, is it worth the risk to ship cargo and store cargo at an airport that is susceptible to major flooding from storm surges, even if there is only a 1% chance this can happen (see exhibit 1)?  And if so, who should bear the costs of upgrade projects at JFK related to climate change and disaster mitigation?

Lenovo: Utilizing the Cloud to Build the Cloud

Student comments on Should the Port Authority of New York and New Jersey (PANYNJ) Be Concerned about the Long-Term Viability of John F. Kennedy (JFK) International Airport?