Over the last few years scientists, non-profits, and governments have raised a call to action against climate change – calls which mostly fell on deaf ears. The Paris Agreement in 2015 has solidified these calls and governments and businesses have sprung to action to combat climate change. Oil and gas companies have taken note and realized that public and economic pressures will continue to exert downward pressure on demand for hydrocarbons.

Royal Dutch Shell, an oil supermajor based in The Hague, believes in climate change and has taken steps to shift the focus away from oil and towards gas and renewables [1]. This shift will require modifications to the existing supply chain of their business. The concern is no longer a supply concern, as it was less than 10 years ago, but a peak-demand concern due to the advent of renewables, electric vehicles (EV), and increasingly energy efficient technologies. Both private and public investment in energy has been focused on renewables. Venture capital firms are getting back into the cleantech industry after years of reticence due to the cleantech bubble 10 years ago. Technologist billionaire Bill Gates has taken up the call to battle climate change and launched a cleantech fund, Breakthrough Energy Ventures, [2]. Sovereign wealth and endowment funds are facing increasing pressure from investors to diversify assets away from carbon-emitting energy sources – Harvard included [3]. The increased competition in the energy space and the demand from the public to transition to renewable sources will persist into the foreseeable future and O&G firms will need to find a way to adapt. 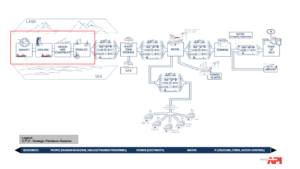 Changes in the Industry

The focus on costs and efficiency are great short-term solutions, however; they do not address the longer-term impacts of climate change.

In the short term, Shell should focus on exploring for low-cost oils and incorporating carbon capture and sequestration technologies to their current operations. They should explore more efficient and autonomous focused transportation methods for their products and their demand is global. Shell should also begin exploring carbon pricing scenarios and its effects on their current operations as some governments are currently moving towards carbon taxation as a potential means to reduce carbon emissions.

In the medium term, Shell should focus on identifying and developing new renewable energy sources which they can add to their business model. There are many capabilities that an oil and gas firm can directly translate into the renewable sector such as engineering, project evaluation, and operations. Shell should begin to develop these internal capabilities for themselves and offer renewable sources such as wind, solar, hydrogen, and biofuels.

Given the changes Shell has undertaken to pivot towards gas and renewables, it begs the question of whether Shell can and more importantly should become an energy firm.

You’re Not You When You’re Hot – Mars. Inc & Their Mission To Combat Climate Change in a Generation