None of the issues has divided the public quite like climate change. Many dismiss notions of “global warming” and the idea that human-driven activity can impact weather on a global scale. Despite the debate surrounding its origins, climate change is occurring, and does affect many industries. The oil and gas industry is dominated by seven publicly owned oil and gas companies, also called Big Oil, Oil Majors or Supermajors — Shell being one of them.

Royal Dutch Shell, commonly known as Shell, is an Anglo-Dutch multinational oil and gas company headquartered in the Netherlands and incorporated in the United Kingdom. t has operations in over 90 countries, produces around 3.7 million barrels of oil equivalent per day and has 44,000 service stations worldwide. It is the fifth-largest company in the world measured by 2015/16 revenues (and the largest based in Europe). It is involved in exploration and production, refining, distribution and marketing, petrochemicals, power generation and trading. It has minor renewable energy activities in the form of biofuels, solar and wind. It also has a modest but growing presence in Carbon Capture and Storage (CCS) space, storing CO2 emissions from the industrial sectors of the economy.

Per the Institutional Investors Group on Climate Change (IIGCC), energy-related activities contribute to about 70% of global GHG emissions. About 60% of those energy-related emissions are a result of oil and gas industry activities, mainly attributable to the dependence on fossil fuel production.

I, having worked in the oil and gas industry for the past 5 years — hopping from one oil rig to another — have observed the amount of Greenhouse Gases (GHG) the industry generates, exposing the industry to federal and international regulations. The Environmental Protection Agency (EPA) in the US has put in place plans to reduce GHG emissions and is moving the nation toward a cleaner power policy. This has forced drilling companies (including Shell) to develop new technologies and practices that comply with these rules. Government regulations aside, climate change will still impact future industry practices. 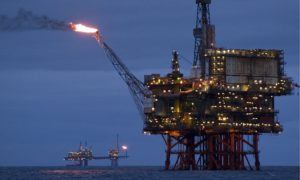 International Business Times explains that increasing temperatures means the number of days above 95 degrees Fahrenheit will increase from the past 30-year average of 39 days to 60 days by mid-century. By 2100, that number is expected to grow to 114 days. The increase in harsh conditions might impact production, as consistent exposure could affect worker safety.

Scorching conditions aren’t the only changes rigs would have to bear: Rising sea levels mean that the Gulf Coast will see its shoreline disappear by as much as two feet by mid-century. The rest of the Southeast will likely see higher sea levels, and will also see intensifying hurricanes. The Southeast and Gulf is home to many of the nation’s pipelines; intensifying flooding and winds could result in infrastructure damage and severely disrupt oil distribution.

What’s Being Done by Shell

Assessing the significant implications of climate change, oil and gas companies (including Shell) are taking steps to reduce their contributions to climate change. A key role for Shell is to find ways to provide much more energy with less carbon dioxide. Shell is a supporter of CO2 reducing technologies, making sustainable energy efforts across four areas: biofuels, carbon capture and storage, energy efficiency and natural gas.

Shell’s natural gas businesses give governments the option to reduce emissions from electricity, by replacing coal. Shell is now also present in the wind energy space, with over 1,000 megawatts of capacity. Shell has also invested heavily in the lowest-carbon biofuel, through its Raízen joint venture with Cosan in Brazil, and it continues to explore second-generation biofuels options. More recently Shell has piloted several projects to bring liquefied natural gas (LNG) to shipping and trucking customers and, in 2015, it announced the first nationwide hydrogen-electric fuel network in Germany.

The Oil and Gas industry is in the spotlight in the battle over climate change. Since about half of the industry’s value lies in untapped reserves or future production, this creates a discord in company priorities. Thus, the GHG emissions will significantly impact the industry’s operations over the next few decades. Companies have acknowledged the threat, and have started adjusting their operations and priorities. However, the need for the industry to work with governments to develop comprehensive plans is more important than ever. Shell, an industry leader with a focus towards shifting priorities towards sustainable energy sources, needs to play its part by investing heavily in renewables and carbon capture technologies. After all, climate change is playing the long-term, and what we do now will influence its final move a century from now. (769 words)

The Home Depot Owning the DIY Approach to Climate Change

Student comments on Shell: The Impact of Climate Change on an Oil Major