The growth of the fast-casual dining industry has plateaued.  A slew of start-ups have expanded rapidly across the United States with hopes of becoming the “Chipotle of X,” and quick service restaurants (QSRs) have seasoned their menus and décor with fashionable flavors to turn up the competitive heat.[1]  Increasing digitalization has affected customers’ preferences, with the fast-casual target customer – the tech-savvy millennial – increasingly demanding good meal value without compromising on food quality, consistent speedy service, the option to interface via an app, and on-demand delivery options at a faster clip than the industry anticipated.[2]  Investment firm Cowen expects the U.S. meal delivery market to grow 12% annually over the next five years.[3]

Shake Shack, a global fast casual chain recognized for its made-to-order ShackBurgers and enlightened hospitality – emphasizing the happiness of its customers and employees – aims to capitalize on digitalization to achieve its goal of unprecedented unit growth in 2018 despite industry headwinds.  Shake Shack has embraced digitalization as its key operational ingredient to accelerate year-over-year store growth by nearly 40% in 2018 while delivering quality service and food.[4]

SHAKING UP THE SUPPLY CHAIN

Preparing for additional growth, this year Shake Shack moved away from managing disjointed relationships with multiple suppliers to partnering with ArrowStream, a supply chain management firm, to migrate all of Shack Shack’s food spending, inventory, supplier and distributor tracking, and quality assurance to a single dashboard.  Shake Shack’s management now accesses “at your fingertips” insights in order to make real-time supplier decisions for the chain, which is particularly complex given seasonal menu changes, new items, and a laser-focus on food quality.[5]

Shake Shack is also investing in technology to enable new ordering methods that satisfy customers.  Shake Shack has a devout followership, but its target millennial customer overall does not like to wait.[6]  In October 2016, Shake Shack launched its mobile app in select locations and now promotes it nationally, allowing customers to order ahead and specify pick-up times.  Shake Shack integrated the app into its in-house point-of-sale ordering system so that its kitchens can seamlessly accommodate app-originated made-to-order purchases without modifying their operations.[7]  In the short-term, Shake Shack is also testing partnerships with various food-delivery companies including DoorDash, Caviar, and Amazon via the delivery service Olo.[8] 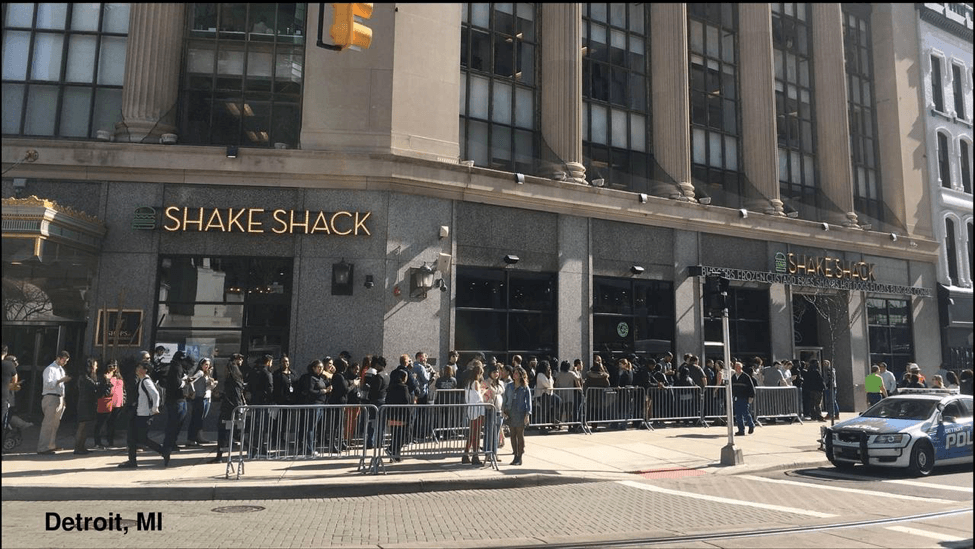 In the medium-term, Shake Shack will continue to roll out its mobile app and more kiosk-enabled stores depending on how its Astor Place location performs.  Management has indicated that labor expenses are Shake Shack’s most significant near-term headwind but has not signaled that it plans to reduce in-store labor.[12]  CEO Randy Garutti indicated that the new location is “our way of seeing how we are going to do that.”[13]  Shake Shack also plans to eventually test other innovations around packaging methods and delivery speeds.

In the short-term, Shake Shack should continue to promote its mobile app, analyze kiosk testing results, and focus on increasing app personalization options such as tracking customer order preferences, past orders, and locations in order to increase customers’ app engagement.  Shake Shack should also integrate more closely with an exclusive delivery partner or consider bringing delivery in-house in order to gain control over the end-to-end customer experience.

In the medium-term, regardless of whether Shake Shack pursues the kiosk model, Shake Shack should redesign split-kitchens in delivery-heavy areas to accommodate the growing home-delivery market demand.  Shake Shack should expand its kiosk model if overall order throughput times decrease and customer satisfaction and quality levels remain high.

Is Shake Shack over-indexing on apps and kiosks?  Does its move toward digitalization inhibit its ability to provide comprehensive quality service to customers?

Does Shake Shack have an obligation to retain its customer-facing labor? What implications will increased automation have on labor as minimum wage increases come into effect?

[8] Zetlin, Minda. “Amazon May Soon Bring You a Shake Shack Burger in Under an Hour.” Inc. September 22, 2017. https://www.inc.com/minda-zetlin/amazon-may-soon-bring-you-a-shake-shack-burger-in-under-an-hour.html, accessed November 2017; Judkis, Maura. “The next time you order food, this cute robot might roll up to deliver it.” March 9, 2017. https://www.washingtonpost.com/news/food/wp/2017/03/09/the-next-time-you-order-food-this-cute-robot-might-roll-up-to-deliver-it/?utm_term=.ae85b5af7d2c, accessed November 2017.

Crypto-Coffee: How Starbucks Is Using Technology To Stay Ahead Of The Competition