The “locavore” food movement has gained steam thanks to increased access to farmer’s markets, community supported agriculture, and support by the industry’s largest proponent of whole, natural, and local food producers: Whole Foods. With the Amazon merger and profit pressures, that business model is now at risk.

Why should localization be of concern to the management of Amazon and Whole Foods?

Whole Foods has demonstrated a strong commitment to small producers in the locavore movement:

Starting in 1980, Whole Foods created the market for local and organic food. By sourcing goods from local producers, the retailer created many success stories of companies who entered a local Whole Foods, gained wider distribution, and then quickly grew [1]. Whole Foods has long been considered the “Holy Grail in Distribution” by many in the food industry [2], a title the company has historically been very proud to demonstrate with its support of small producers. Furthermore, Whole Foods has been able to sustain many small-to-medium-sized producers with its stringent supplier accreditations, local sourcing initiatives, and price points that reflect the true cost of growing and producing food [3].

How are Amazon and Whole Food’s business models transitioning amidst this commitment?

Whole Foods actions demonstrate how difficult it is to scale the locavore movement:

In recent years, pricing pressures, efficiency-optimization, and corporatization have been threats to Whole Food’s business model. Wall Street pressure for revenue and profit growth continuously ran contradictory to the company’s original method, and for much time, John Mackey as CEO resisted many pressures from the street. However, some recent actions demonstrate that profit growth is still difficult when paying suppliers as fairly as Whole Foods does. The company has lengthened the supply chain by centralizing some key buying decisions in Austin (as opposed to local stores), which happened even before the Amazon news was announced [5]. To some, with the Amazon acquisition, Whole Foods is relinquishing its pursuit of combining higher profits while incorporating small scale producers [6].

Amazon’s influence is the largest outstanding question as the two companies begin their integration:

Industry followers question Amazon’s record in other fields and wonder if the retailer will continue to use its power to further centralize and streamline Whole Food’s operations. Historically, small producers have been protected by Whole Foods on the distribution and financial side. Many wonder if Amazon will be so generous, or if some of the positive developments in the locavore movement will be undone with the merger [2].

Since the merger has closed, some local producers have already been pushed out. Meanwhile, senior execs at Whole Foods have commented on their commitment to remaining “locally relevant” and being “an incubator of local and innovative trends and brands” [1].

How should the combined Whole Foods and Amazon continue to demonstrate their commitment to local food producers?

These comments are meaningful, but one can’t help wondering how senior execs will marry the two business models. As one company strives for growth at all costs, and even negative margins in key segments, how does the acquired company maintain its reputation with, and support of, small agriculturalists?

Going forward, Whole Foods should re-emphasize its commitment to local producers and increase the visibility of its supply of local produce and meats. As the company has gotten larger, and profit pressure has increased, some focus has been lost on a local-first mission, especially amidst some nicknames such as “whole paycheck.” However, consumers are willing to pay up for goods they know are local (Figure 2, [4]). Whole Foods and Amazon should take advantage of this pricing differential before assuming the need to cut costs.

Questions for the future:

Is it truly possible to scale “local,” profitably?

Will another type of organization or company step in to be a new, smaller, and refocused Whole Foods-like company? 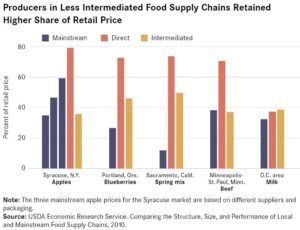 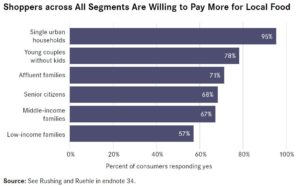 [5] Soderlin, Barbara. May 2017. “Changes at Whole Foods could mean fewer local products on the shelves.” http://www.omaha.com/money/changes-at-whole-foods-could-mean-fewer-local-products-on/article_cfa01ca1-36c2-5a0d-b9a6-070ac86423f1.html

Tuttle, Brad. September 2017. “A Bunch of Local Brands Are About to Disappear From Whole Foods.” http://time.com/money/4951402/whole-foods-amazon-small-local-brands-groceries/