In 1998 Chairman and CEO of Nike, Phil Knight, said, “The Nike product has become synonymous with slave wages, forced overtime and arbitrary abuse [1].”  Today Nike is recognized as a leader of sustainability in the retail industry, signing the White House pledge against climate change, and even experiencing ratings upgrades from Wall Street analysts based on their sustainability performance [2] [3].  While their reputation has clearly made a U-turn, the question remains: can Nike take their game to the next level?

The retail industry is at a unique intersection of opportunity and threat from climate change. Some threats are immediately apparent: adverse weather events caused by climate change may result in store or factory closures translating to immediate sales loss.  Nike experienced this in 2008 when flooding in Thailand caused temporary closure of four factories, while companies such as IKEA, impacted by Hurricane Sandy in 2012, lost $9M from store closures [4] [5]. Less apparent threats include the upstream impact of availability of raw materials as well as regulations impacting operational practices including energy efficiency, water use, and the disposal of waste [6] [7]. While risky to retailers’ business models, these threats also translate into opportunities to differentiate and develop reputational advantage.

Since the late 1990s Nike has worked to embed environmental and labor related metrics into the structure of the organization; Chief Sustainability Officer, Hannah Jones, describes this journey, “[sustainability] moved from being a risk and reputation function to being a business lever function to being an innovation function [8].” Today the company looks at impact across its entire value chain on an ongoing basis. Figure 1 below from Nike’s 2014/2015 Sustainable Business Report depicts the proportional environmental impact of each step in Nike’s value chain. 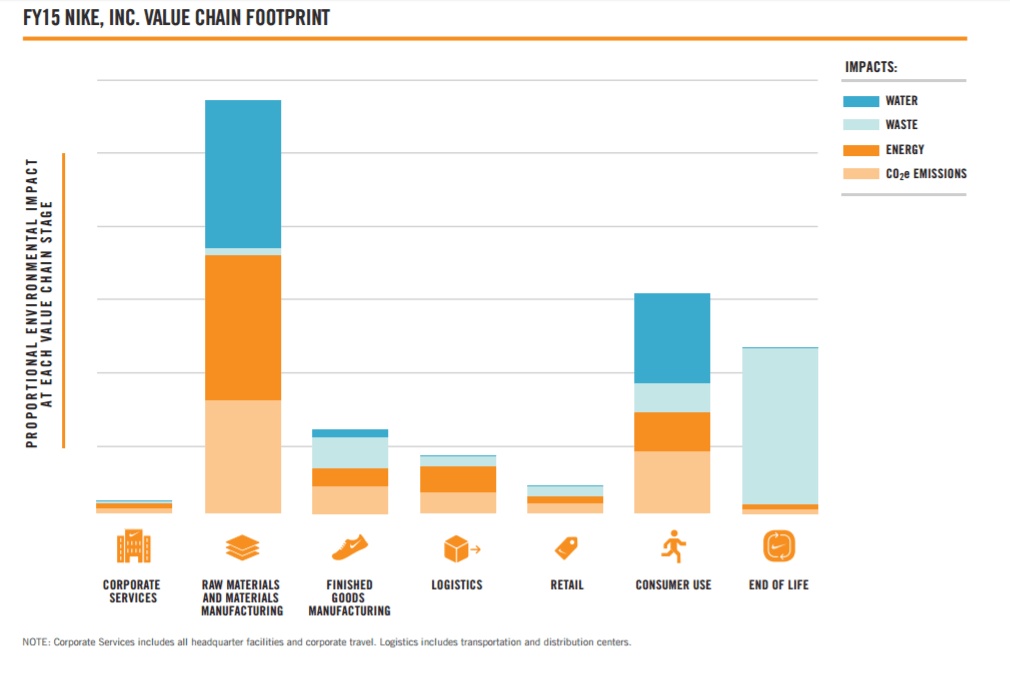 This figure highlights where in the value chain Nike has decided to focus its climate change efforts:

The After-Action Review: Next Steps for Nike

Despite Nike’s sustainable efforts, some critics, such as the environmental activist NGO, Greenpeace, claim that Nike is still underperforming compared to peer organizations [15]. I believe there are several key areas of improvement Nike can focus on in the future:

As one of the most globally influential brands, Nike has a responsibility to the globe to keep the ball rolling on the critically important topic of climate change.

[8] Abnett, “Just Fix It: How Nike Learned to Embrace Sustainability,” Business of Fashion

[11] Abnett, “Just Fix It: How Nike Learned to Embrace Sustainability,” Business of Fashion

[17] PWC, “Building value by addressing the impact of climate change”

Is One Man’s Trash (Fish) Another Man’s Treasure?

Preparing for Climate Extremes at PotashCorp

Student comments on Running to Discover Sustainable Solutions: How Nike is Fighting to Win the Climate Change Game