Related Group of Florida is one of South Florida’s largest luxury real estate developers, with over 100 million square feet developed in the region since 1979.[i] With upwards of 30 projects[ii] totaling $10.7 billion in assets under development, Related Group proves that the boom in real estate in South Florida is as strong as ever, with ~11,000 condos across over 100 buildings currently under construction in Miami-Dade, Broward and Palm Beach counties[iii]. In an area marked by development excess, Related emerges as the leader – it has been estimated that 1 in 4 high-rise dwellers in Miami lives in a Related building[iv].

Southern Florida has long been subject to a boom and bust real estate market. Miami Beach, for example, is one of the most populated barrier islands in the world thanks to decades of development that have established the city as a top destination for tourists seeking a luxurious beach experience. Unfortunately, the city also happens to be one of the lowest lying municipalities in the country, and the situation is not much better for the broader Miami-Dade County, 60% of which sits less than 6 feet below sea level.[v]

BOOM? BUST? THAT’S JUST THE SOUND OF THE LEVEES BREAKING. 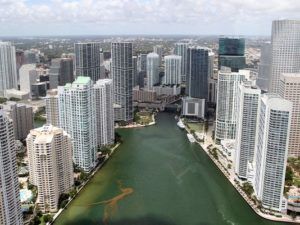 COWBOYS DRAWN TO A GOLD RUSH

Related Group’s CEO recognizes the impact of climate change on new development, but he also acknowledges the particular psychology that makes for a good real estate developer in the first place: “We are an industry with a lot of cowboys. Real estate developers seem to be the most optimistic of people.”[viii]

And in truth they have reason to be optimistic. Miami-Dade county, whose tax revenue comes disproportionately from property taxes, has expressed a willingness to invest significantly into capital improvement projects aimed at mitigating risks to property from rising sea levels[ix]. The public sector sinks or swims with the local property market in Miami, and Related has done a good job of forming strong relationships with government. 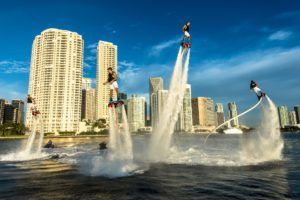 Development in Miami will continue to be hugely profitable – until it’s not.  Related can take a few steps to adapt to the future state of the world:

None of these solutions, though, present the same profitability that Miami Beach development has allowed for. It will take long-term, community-based thinking to make the leap.

[vii] “Where we see some headwinds is in the capital markets,” said Ezra Katz, CEO of Aztec Group Inc. in Miami, citing regulatory pressure on commercial banks to limit their exposure to real estate loan losses. “I think you’re going to see some serious setbacks in construction lending … by regulated banks.” http://therealdeal.com/miami/2016/09/27/jorge-perez-expect-residential-development-in-miami-to-slow-not-stop/

Hilton Worldwide – cutting the green edge or imitating the competitors?