The automotive industry and government have had a tumultuous relationship this year. Governments enacted stricter emissions standards, hoping to incentivize the use of biofuels and electricity, and companies like Volkswagen cheated government agencies in what is being dubbed “diesel dupe” – a scam in which Volkswagen installed a device that “knew” when the car was being EPA tested and forced it to operate with less emissions than it would on the open road [1].

Over the last decade, cars have been inextricably linked to CO2 emissions, the largest contributor to greenhouse gasses and global warming. In 2014, Carbon Dioxide (CO2) accounted for 81% of greenhouse gas emissions (GHG) in the United States, or the equivalent of 5.6 billion metric tons. Of CO2 emissions, transportation accounted for 31%, second only to electricity production (37%) [2]. Similarly, the European Union reported cars were responsible for an estimated 12% of CO2 emissions in 2014 [3]. As the scientific link between CO2 and climate change is strengthened, scientists and global citizens are increasingly calling on governments and manufacturers to reduce carbon output.

In order to do so, car manufacturers must navigate a myriad of regulations that multiply in complexity across various countries. However, all regulations seek to solve one common problem: reduction in CO2.

In recent years, Ford has taken important steps to reduce its carbon footprint by increasing fuel economy. To increase miles per gallon, Ford has introduced Eco-Boost technology which combines both direct-fuel injection and turbo-charge. Direct-fuel injection is similar to just-in-time processing where the fuel is delivered to the right pistons at the right time, with minimal waste. Turbo-charging is a fancy term for using the engine’s own exhaust to pull in air from outside the car. Explosions move pistons and explosions need air, so by turbo-charging the engine, gas can explode at a greater magnitude. Additionally, Ford has altered their transmissions to include more gears. Incremental gears allow for smoother transitions between speeds, maximizing each gear with less fuel. 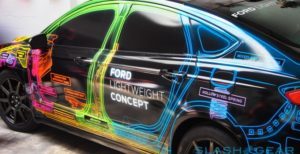 Ford has also experimented with new materials to develop a light-weight concept car.  By using light-weight composites instead of steel, Ford reduced the weight of a comparable Fusion by 800 pounds. This reduction in weight pays dividends, allowing the car to operate with a smaller engine, further reducing required fuel usage.

A second way Ford has decreased its emissions is by incorporating alternative fuels such as clean-diesel, biofuel, hydrogen-fuel and battery-powered vehicles. Interestingly, biofuel emits the same CO2 as everyday gas, however, its net emissions are zero since plants used to create biofuel absorb the same CO2 they emit upon combusting. Another important consideration is battery-powered vehicles and their use of electricity. Despite the buzz surrounding their use, creating electricity itself is one of the biggest contributors to overall CO2 concentration in the atmosphere. If innovations are to decrease global CO2, it is important to understand where in the supply chain this decrease occurs. In the case of electricity, it is important we source our electricity from wind, solar and other renewable sources [4].

In 2012, Ford assessed 91% of its GHG emissions came from older models, 1.4% from facilities, and 7% from new vehicles. Further contributing to its low facilities percentage is Ford’s innovative use of carbon emissions from its own factories, which it is learning to reprocesses into foam for seats.

Despite Ford’s progress, it is clear that Ford’s older model cars are contributing to the majority of its GHG emissions. While Ford does have a scrap buy-back program, it appears a bit weak, and likely correlated with the lack of governmental focus on this part of the business, proving yet again environmental consciousness is all well and good until it has an adverse affect on a firm’s bottom line. In order to sell a new car, Ford has to meet the new standards of government and consumers. Hopefully, as these older cars are phased out, their affect on the environment will lessen.

Additionally, Ford’s mixed track record is highlighted by its late abdication from the American Legislative Exchange Council (ALEC), an organization that promotes the denial of climate change [5]. Better late than never, I suppose.

Far from altruistic, Ford, the automotive industry, and regulatory agencies have taken great strides to address climate change. This past year, the CEOs of several of the world’s largest manufacturers, along with suppliers, signed a commitment to help “decarbonize” automotive transportation [6]. Through its science-based approach, Ford hopes to do its part to stabilize CO2 concentration at 450 PPM (a widely recognized tipping point metric), and by 2030 Ford estimates to be about 1% of global car emissions. Unlikely to act in the absence of economic incentives, let us hope government puts appropriate measures in place to continually incentivize capitalist companies to reduce emissions and slow climate change. 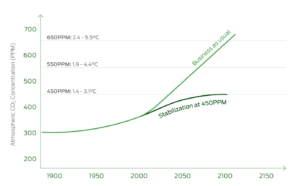