Forever21, a Los-Angeles based player in the retail industry, generates over $4 billion a year [1] selling a wide range of inexpensive, fashion-forward apparel and accessories. It operates a “fast-fashion” business model, which involves churning out a clothing item from raw material to finished good within an extremely tight turnaround time – retailers such as Forever21 receive shipments of new clothing styles daily [2]. The model of “fast-fashion” comprises of a) constant up-to-date trends in products and b) selling large volumes of products priced significantly below that of a comparable product from a “higher-end” brand. This business phenomenon, which took off over the past decade, has revamped the apparel retail landscape; overall retail prices have increased over the past 10 years, yet clothing prices have decreased [2]. 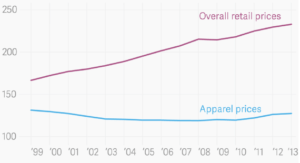 As new products are pumped out into Forever21 storefronts daily, customers are shopping more often than they have ever before. According to the American Apparel & Footwear Association, Americans purchased roughly 63.7 garments in 2013, which is more than one item of clothing each week on average [3].

This self-reinforcing cycle has serious consequences on climate change and the environment at large. Because fast-fashion apparel is so inexpensive, customers do not need to think twice when disposing of clothing they no longer want. The US Environmental Protection Agency’s 2013 report stated that clothing and footwear generated 11.1 million tons of waste in 2013 [4]. This waste has major ramifications on the environment: chemicals from color-treated fabric can seep into groundwater from the landfill and release toxins into the air if the waste is incinerated [5].

The fast-fashion carbon footprint extends across the entire supply chain. Raw material is often sourced from countries like China or India. However, to keep prices as low as possible, fast-fashion players have started to shift manufacturing processes to countries with dirt cheap labor, such as Bangladesh and Vietnam. Raw materials are shipped to garment factories, and the finished products are shipped to retail stores worldwide. The shipment of goods across countries requires substantial transport resources, which drives up greenhouse gas emissions. Although Forever21 ships via sea versus air to curb its carbon emissions [6], one cargo ship can still produce as many pollutants as 50 million cars annually [7].

So, what exactly is Forever21 currently doing?

Forever21 has taken a number of steps to improve upon its energy efficiency and decrease its carbon footprint. At the store level, Forever21 has committed to using “energy efficient lighting systems to vastly cut down on the energy usage.” In 2015, Forever21 installed a 5.1 megawatt solar installation on top of its DC warehouse, which is estimated to reduce production of carbon dioxide by 13 million pounds per year [6]. In addition, the company has committed to help push forth Los Angeles’ Feed-in Tariff program; the target goal is to generate 33% of total energy from renewable energy sources in 2020 [6].

While Forever21 has taken initial strides in the right direction, it is far from where it needs to be to be. To cut down on its environmental impact, Forever21 will need to rethink how it operates its entire supply chain process, from the sourcing of raw material, operations in its garment factories, to delivery of its product to its retail stores.

Above all, the biggest hurdle for the company is figuring out how to reposition its consumer-facing strategy to best market eco-friendly fashion products, a major challenge in an industry in which “environment” and “fashion-forward” are frequently perceived as contradictions. Many fast-fashion enthusiasts are, at best, neutral towards sustainable fashion and, at worst, completely uninterested in environmental issues. However, the purchasing decisions of these individuals are heavily influenced not only by their own individual attitudes, but also by relevant social norms [9]. Forever21 must recalibrate its marketing strategy towards addressing just that – making sustainable fashion the “new normal” and not just an afterthought for fashion-conscious consumers.

The unsustainable nature of the fast-fashion industry is very much a “chicken or the egg” problem. Forever21 must make the first move. As to whether to purchase the $5 sweatshirt: the ball is now in your court.

Student comments on Not So Fast: The Unglamorous Side of Fast-Fashion