Trump’s “America First” trade policy has introduced tremendous uncertainty for global companies operating in the US with significant offshore manufacturing or import exposure. [1,2] Immediately after his election, global manufacturers urgently began to assess their risk to potential trade shocks, a task made more difficult by the lack of clarity about policy specifics in the GOP blueprint available at the time [3]. Many of these manufacturing firms called on consultancies to help size the likely impact and develop plans to mitigate risks or take advantage of any new competitive opportunities. Companies with high exposure relative to their competitors developed contingency plans for a time when foreign sourcing and manufacturing might become a disadvantage. Conversely, domestic manufacturing supply chains that have yet to seize the opportunity for lower labor costs in other countries held a potential advantage over offshored competitors. Bain argues that the automotive industry will likely be hit the hardest by any changes to NAFTA or by the imposition of a border adjustment tax, given the extent to which those supply chains rely on goods manufactured or sourced outside of the US [4].

To illustrate the potential impact of these changes, consider Rassini, an autoparts producer headquartered in Mexico that primarily serves automakers operating in the US (e.g., Ford, GM, Toyota, Honda, Volkswagen, Audi) via manufacturing sites in Mexico, the US, and Brazil. US customers comprised ~90% of its total 2016 sales of ~$900M, suggesting a substantial portion of its revenues are vulnerable to policy changes under consideration by the Trump administration [5, 6, 7]. There is little consensus about the specific policy to be implemented, but for the sake of clarity, let’s consider a simple scenario revealing the impact that a 20% penalty, like the one Trump’s former White House press secretary suggested earlier this year, might have on the company if we assume all of their products sold in the US are manufactured outside its borders [7, 8]. 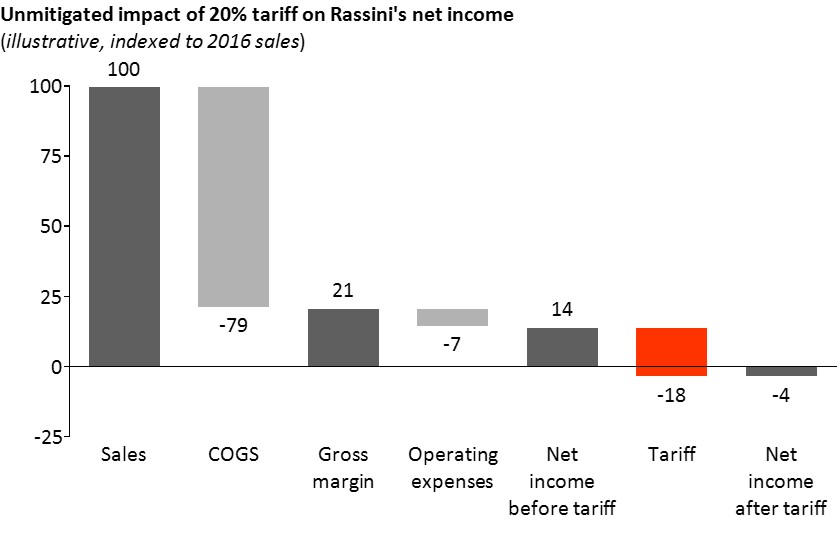 This scenario may be unlikely, but it approximately bounds the worst case impact of Rassini’s US trade exposure and can serve as a helpful starting place for developing contingency plans. In the implausible event of a 20% tariff on the ~90% of sales in North America, Rassini risks becoming unprofitable.

Rassini has proactively taken several actions that help mitigate these risks, including:

These are critical actions to ensure Rassini has a chance of remaining competitive with US manufacturers in the event unfavorable trade policies are imposed on Mexico, but they’re hardly enough to offset costs in the event of a more punititive tariff. Rassini should considers the conditions under which it may benefit from pulling the following additional levers:

Given the uncertainty of the political climate and policy specifics, Rassini likely cannot yet justify the high cost actions mentioned directly above. However, to be in a position to act fast in the event policy changes are implemented, they need to evaluate bold potential mitigating options in addition to the incremental adjustments already underway.

Going forward, how should manufacturing companies like Rassini approach strategic decisions in the face of such uncertainty? To what extent can exposed organizations build in the operational flexibility to deal with change in the event new policies have a seismic impact on their existing competitive landscape? (800 words)

Duck, Duck, Goose: Why Canada Goose should ensure the shift towards e-commerce on the front-end drives digitalization throughout its supply chain