Over 15 million tourists[i] flock to Miami Beach annually to enjoy the City’s white sand beaches, art deco buildings, and vibrant nightlife. Miami is a unique cultural mecca, and its stunning beachfront locations have also made the city a hot spot for real estate developers. There are currently over 400 condo towers (approximately 50,000 units) under construction from Miami to West Palm Beach.[ii] However, the prospect of rising sea levels and global warming loom ominously over the City’s future prospects.

Rising greenhouse gas concentrations are contributing to glacial melting as well as the warming and expansion of the oceans.[iii] Accordingly, sea levels are expected to rise by up to 2 meters by 2100.[iv] The problem is even graver in South Florida, where sea levels are projected to rise by up to 10 inches by 2030 (compared to 1992 levels).[v] The region is particularly susceptible to flooding due to its “high water table, porous limestone bedrock, and low elevation.”[vi] Miami, with its booming real estate market, stands to loose up to $3.5 trillion in assets by 2070 as a result of climate change.[vii] Given these risks, the City has adopted a proactive mitigation and adaption strategy to hedge against future climate change impacts. 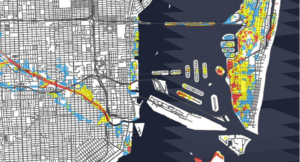 According to the City of Miami, every dollar that is invested in mitigation efforts is estimated to save $4 in potential losses in value.[ix] The City has therefore attempted to create a framework to plan mitigation efforts by establishing the following task forces:

The most salient of the recent initiatives that the Miami Beach task forces have proposed and begun to implement include the following: 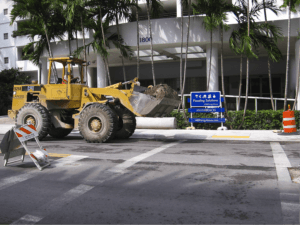 Levine has committed to an unprecedented investment in flooding mitigation measures. Critics accuse Levine of catering to the “big-money interest” of well-heeled developers and investing in “untested solutions.”[xv] While there may be more than a shade of truth to these detractors, Levine is tapping into a lucrative source of both financing and advocacy through his relationship with real estate developers.

Imagine A World Without Lobster Rolls

Student comments on Mortgages: Not the Only Thing “Underwater” in Miami Beach