Skiers love a good snowfall and the ski resort business has been known to be very highly correlated with snow volumes and friendly weather conditions. For Mont Sutton in Quebec, Canada, a resort which prides itself in offering mostly natural snow to its customers, the effect of climate change and reduced snow volumes year after year has had a significant impact on their ability to generate traffic and revenue. The effect of climate change on the ski resort business has been devastating in the recent years, as the ski season is being shortened by the lack of snow and by warmer temperatures, mainly driven by the impact of climate change on global temperature and precipitation.

The Boulanger family founded Mont Sutton more than 50 years ago, but the resort was sold to a group of investors earlier this year (2016) in an effort to revitalize the business following several disappointing winter seasons. The new investors face several solutions to mitigate the impact of climate change on the company, some of which can be implemented rapidly and some of which will require time.

Winter tourism struggling from decreased snowfall is a global problem, and areas relying heavily on winter tourism such Canada, Colorado, Utah, etc. are most heavily impacted by the economic impact of climate change on the ski industry. Not only are mountains receiving less snow every year, but the snow melts quicker at the end of the season due to higher temperature levels, shortening the season altogether.

The climate change issue for ski resorts is global, and many ski resorts’ income statements are being heavily impacted by decreasing customer volumes. A study focusing on major northeastern U.S. ski resorts estimates that only four out of 14 major ski resorts will operate profitably by 2100 under what they define as a “higher emissions scenario”. 1 Another study on the future of western US resorts suggests that Park City, Utah will lose all mountain snow pack by the end the century while Aspen Mountain, Colorado snowpack will be confined to the top quarter of the mountain under a “higher emissions scenario”. 2 This significant decrease in snow volumes is very highly correlated with a decrease in the number of customers, which strongly impacts the economic viability for mountain owners and their ability to achieve profitability. In fact, as depicted in the map below, it is estimated that skier traffic can decrease up to 30%+ annually between a season with good weather conditions and a season with low snowfall and unfavorable weather.3 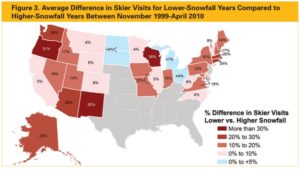 As the new Mont Sutton investors are looking to earn returns on their investment, tackling the climate change’s influence on revenue generation is top of mind. In fact, one solution that many ski resorts have adopted to free themselves from this dependence on weather has been synthetic snowmaking. Machines located on the ski slopes connected to a water source produce artificial snow, eliminating the need for a natural snowfall to cover the ski slopes and attract customers. Not only does this reduce the variability of the snow conditions on slopes such as Mont Sutton’s, but it extends the duration of the ski season by days or even weeks.
Mont Sutton’s new investors have rapidly decided to install 50 snowmaking machines to cover the mountain’s slopes of snow early in the season and provide artificial snowfall on an as needed basis. Starting next year, the consistency of the snow conditions and the extended season duration should have a significant positive impact on the business’ financial performance. The picture below depicts the installation of such snowmaking machines at Mont Sutton.4 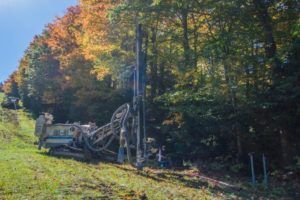 As Mont Sutton’s new owners think of the future profitability of the asset they acquired earlier this year, they should envision increasing the utilization of the mountain for activities not requiring snowfall, such as mountain biking, hiking, etc. Because the company is so heavily focused on the mountain’s primary purpose, that of a ski resort, it is still significantly exposed to being impacted by climate change in the future. By expanding its revenue streams to multiple activities being performed in different weather conditions, the impact climate change would be on the volatility and magnitude of earnings would be reduced, and Mont Sutton would be less vulnerable to the systematic increase in temperature levels and decrease in snowfall year after year. The implementation of such a measure woud have to happen through time but would act as a hedge to climate change.

Nevertheless, Mont Sutton’s new investors are currently on the right track to mitigating the impact of climate change on their ski resort business through time, and the skiing community in the area welcomes the extended ski season with enthusiasm.

H&M and the Push for Sustainability in Fast Fashion