Mining has been around for thousands of years and yet it still remains one of the most dangerous jobs on the planet. Hundreds of people die or get severely injured on the job every year. In Australia alone, 11 people have died so far in 2016. [1] Quite frankly, that’s 11 miners too many, but most companies think fatalities are inevitable given the dangerous nature of the work. However, a beacon of hope has emerged in the past decade that could put an end to it all: digital technology. 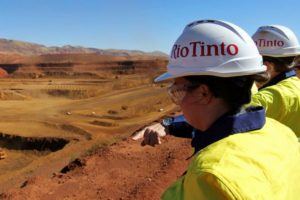 The Mine of the Future

Rio Tinto, a global metals and mining company, is leading the charge in incorporating digital technology into their daily operations. Focused primarily in Australia and North America, Rio Tinto’s shareholder promise is to deliver long-term, sustainable returns in part by using technology to increase productivity. [2] This is where the automation comes in.

Rio Tinto has designated their Pilbara location in Australia to be their testing ground for new automated technologies. They call it the “Mine of the Future”. The goal for Pilbara is to eventually control all its vehicles and machinery from the Operation Center in Perth, 920 miles away. There, operators and data analysts work side-by-side to orchestrate the actions of trucks, excavators, drills and trains. [3]

So how does this actually work?

Driverless trucks have sensors on them that feed data to the operations center, enabling the operators and data analysts to understand the exact layout of the mine as well as the truck’s position within it. Then, the operators navigate the trucks around the mine in the most efficient way possible.

Smart autonomous excavators use similar visual sensors to differentiate between mud and usable materials, enabling them to load up trucks without any human interference.

Smart autonomous drills have sensors that let them sense when rocks have fractured along their natural break line, which then helps remote operators and data analysts determine where exactly to drill next.

Once the other machines have done their work, autonomous trains with the ability to carry larger loads than ever before will run from the mine to the port.

Essentially, these machines are able to work smarter and more effectively than any human miner could. According to the CEO Sam Walsh, their autonomous trucks “outperformed the manned trucks by an average of 12%, primarily by eliminating required breaks, absenteeism, and shift changes.” [2] 12% may not seem like a huge advancement, but that small percentage will compound over time, decreasing total machine downtime and variability while increasing the overall efficiency and reliability in a big way. [4] Even more, fatalities will be non-existent once all automated vehicles are up and running.

Why isn’t everyone hopping on the automation bandwagon?

1. It’s very expensive. Not only will Rio Tinto have to pay for the initial versions of these machines, but they will also have to periodically update the machinery to make sure it functions accordingly. On automated trains alone, Rio Tinto is expected to spend $442M. [6] Their R&D costs for the full project are going to be through the roof.

2. Being a first mover is hard and introducing new technology into your day-to-day operations is risky. Who knows if it will make a big enough impact to cover those huge upfront costs?

3. There has been some resistance from the miners regarding automation. Unions have accused Rio Tinto of lying to their workers and using automation to cut labor costs. [5] Rio Tinto has assured their workers that no jobs will be lost, but rather the work will simply change from individual “blue-collar work” into a more group-oriented “knowledge-based role” [3] Moreover, by convening the workers under one roof at the Perth Operations Center, Rio Tinto has seen more collaboration and collective-decision making which ultimately has saved them millions of dollars. [4]

What’s next for Rio Tinto?

1. They need to test the “Mine of the Future” and get a proven Return on Investment number. If the ROI is good enough, they can try to get funding from shareholders or banks.

2. They need to decide when, where and how fast to expand the “Mine of the Future” concept. Because this would require a huge upfront cost, they need to do a cost-benefit analysis to justify such a large investment.

3. They need to think about the unions and their employees. How will they navigate those relationships going forward? Do their existing employees have what it takes to get the automated job done?

4. They need to remember that technology is a complement, not a substitute. While automated machines will improve safety and productivity at the mine, Rio Tinto can’t lose sight of how important humans are to their operations as well.

[3] “Industrial Internet of Things: Unleashing the Potential of Connected Products and Services”

[4]  “Recombination at Rio Tinto: mining at the push of a button”